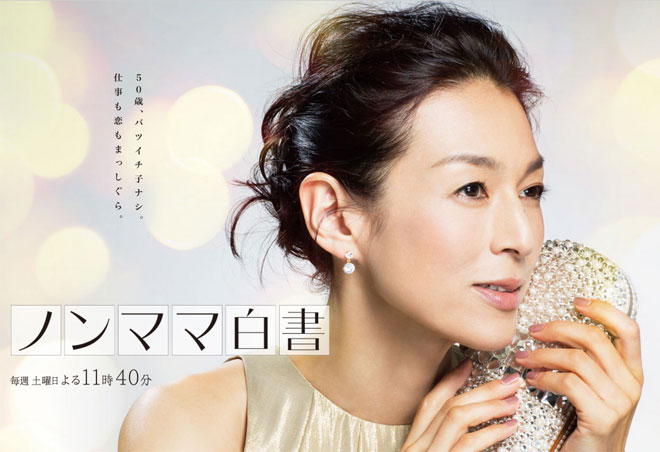 Story
“Become a manager if I menopause?!” 49-year-old Doi Reiko is divorced and childless. A career woman who works for Jenia Advertising, a medium-sized advertising agency in Tokyo, she is a project leader in the Planning Strategy Headquarters’ Planning and Production Department. In an era when she had to make a choice between work and childbirth, Reiko opted not to have a child and lost track of herself as she raced through her 20s and 30s. So did her colleague Ono Aimi and freelance reporter Hayama Kayoko. Their generation tolerated the icy stares of society and unreasonable treatment of their bosses and worked hard. However, times have changed even though they struggle to become a force in society. It is now a world where working mothers are lionised amid a climate to stop the falling birth rate. In the end, women like them who are not mothers feel inferior. In society, new problems such as the discrimination against pregnant women and women who do not have children arise but there are no solutions. In the workplace, Reiko is held back by her superior, under pressure from her juniors, considered a burden by male colleagues and regarded an enemy by female colleagues. Meanwhile, the rumour about Reiko’s promotion to department manager causes buzz. It’s a fact that Honjo Tsukasa, who joined the company at the same time as her, is already in management At one time, Reiko and Honjo were a couple. They each got married and are now simply workplace colleagues, but in their 30s they divorced their partners. Even after that, they did not rekindle their romance. However, it would be a lie to say that they are both completely unaware of each other. They are definitely always on each other’s mind … …

Characters
Suzuki Honami as Doi Reiko
A single, divorced woman on the verge of 50 with no children. She joined Jenia Advertising after graduating from university in 1989. In that same year, the Gender Equality in Employment Act went into force. Because she entered the company when the law was just enforced, she had a very difficult time working alongside men. However, the tremendous popularity of a drama starring Asano Yuko and Asano Atsuko on TV would usher in an era where women lived vivaciously. This gave her the strength to work hard too and she was full of vigour despite the gender discrimination. In the end, she ended up becoming “a woman clinging to work”.

Kikuchi Momoko as Ono Aimi
Doi Reiko’s unmarried human resource colleague at Jenia Advertising. Because she is a beauty, she has been popular with men since young. Although she joined the company through connections and does not have considerable capability, she played an active role entertaining clients with beauty as her weapon. She is predisposed to dangerous romances and drawn to wealthy, good-looking, capable men who exude danger … … older and married too. As a result of her repeated affairs, she is still single now. She has good knowledge of what happens within the company because she is now in the human resource department.

Watanabe Makiko as Hayama Kayoko
A married freelance reporter with no children. She is fairly successful. She gathers information and analyses focus on subculture, writes for many magazines and publishes new books regularly. She got married at 32 and continued working after that up to the present day. The DINKS (dual income, no kids) trend, which began around 1988, is over. Now the DEWKS (dually employed with kids) are prevalent and she feels inferior. She had no intention to become a mother from the beginning and her husband was also of the same opinion. So they did not have children. The two of them now live in a jointly owned apartment. Because they are both independent, they control their own purse strings. Theirs is a life where they jointly invest in common property.

Hamada Takahiro as Konaka Sota
A staff of the Planning and Production Department. He tries to be an average employee as much as possible instead of doing things that attract attention. However, he analyses his bosses behind their backs. It is not clear whether he is Doi Reiko’s ally or enemy.

Uchiyama Rina as Nomura Kana
A new mother. A staff of the Planning and Production Department. Doi Reiko’s subordinate. She came back to the workplace after taking maternity and childcare leave for her first childbirth. Although she has shorter working hours, she fights to get prominent work to distinguish herself. She apologises for the reduction in her working hours, but maintains that it is fully her right as an employee. Reiko wishes to let her work harder. However, the situation is such that she cannot entrust her with important work.

Minamisawa Nao as Tsukamoto Ririka
A staff of the Planning and Production Department. Doi Reiko’s subordinate. No one is sure what is on her mind. Because she says that she wants to become a career woman like Reiko one day, she is taken under her wing.

Takahashi Katsunori as Honjo Tsukasa
He joined the agency at the same time as Doi Reiko and Ono Aimi. But he was always promoted faster because it is a male-dominated society and is the head of the Planning and Production Department. He is divorced and his ex-wife is raising their only son. Because she runs a company and is rich, he does not have to pay alimony and child support. However, the truth is that their divorce was due to her affair and it would have hurt if he is paid alimony. But his pride will not allow it and he cannot make it public. He is diplomatic in the company and is respected by both the management and also his subordinates.

Satoi Kenta as Kimura Ryohei
The married general manager who controls Doi Reiko’s department. In truth, he thinks working mothers are annoying, but he pretends to be very receptive of them. He actually is an old-fashioned male chauvinist who believes that both non-mothers and working mothers are a nuisance. He basically has no specific suggestions no matter what Reiko consults him about. He would obfuscate by saying, “It’s your chance to show that you can do something about this.”

This blog contains information and musings on current and upcoming Japanese dramas but is not intended to be comprehensive.
View all posts by jadefrost →
This entry was posted in Fuji TV, Summer 2016 Dramas and tagged Minamisawa Nao, Non Mama Hakusho, Suzuki Honami, Takahashi Katsunori, Uchiyama Rina. Bookmark the permalink.