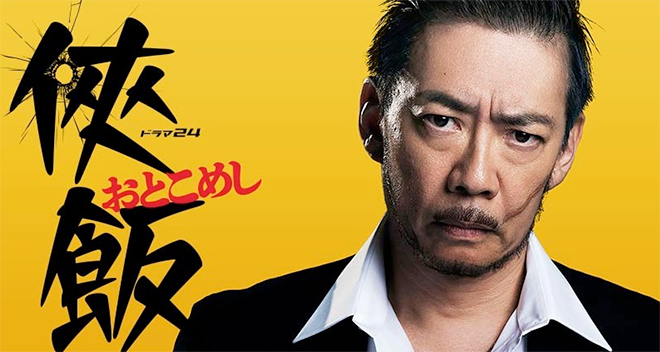 Story
University student Wakamizu Ryota goes to an interview at the publishing company of his dreams, but is overwhelmed by the disagreeable interviewer. He dejectedly heads home and encounters the scene of Yanagiba Ryuichi and Hino Joji, who are obviously gangsters, attempting to get a man with a sack over his head into a car in the vicinity of his house. Then another car drives over and an exchange of gunfire breaks out between the gangsters. Yanagiba gets shot protecting Ryota who ran out without thinking. Hearing the sirens of a patrol car, the attackers flee. When Ryota tries to go back home, Yanagiba and Hino follow him … … Yanagiba clutches his chest in pain at Ryota’s apartment. Feeling sorry that Yanagiba got injured because of him, Ryota tells him, “I’ll listen to whatever you say.” Then Yanagiba abruptly gets up and takes off his jacket. He is wearing a bullet proof vest under it and is unhurt. His name card drops and Ryota shudders to see the words on it – Yanagiba Ryuichi, the boss of Yanagiba-gumi. Yanagiba says to Ryota, “Well, will you shelter me for a while?” This is how Ryota ends up harbouring Yanagiba in his own home. The next morning, Yanagiba threatens Ryota, who is about to go to school, warning him not to talk about them. Ryota meets his friends and tries to tell them the situation which he is in. However, he realises that Hino is keeping a lookout and feels intimidated. When he returns to the apartment, Yanagiba has started examining the ingredients in the kitchen. He uses the leftover food in the fridge and begins to prepare a meal without asking. Ryota tries to help but Yanagiba tells him, that the kitchen is his domain. The meal is surprisingly delicious despite the leftovers that did not seem possible to combine. This is the beginning of a bizarre communal life connected by meals for a gangster and a university student.

Characters
Namase Katsuhisa as Yanagiba Ryuichi
The boss of Yanagiba-gumi. He looks scary but loves food and can prepare surprisingly delicious meals with just the items in the fridge.

Emoto Tokio as Wakamizu Ryota
A third-year student of a third-rate university. He is currently searching for a job. Yanagiba Ryuichi who was involved in a fight suddenly comes to live in his house and he reluctantly lets Yanagiba live off him.

Uchida Rio as Yuki Haruna
Wakamizu Ryota’s friend in university. She is cute and loves comics about romance between boys.

Miura Masaki as Hino Joji
Yanagiba Ryuichi’s right-hand man. He intimidates Wakamizu Ryota in one way or another and toys with him with stories that may or may not be true.

This blog contains information and musings on current and upcoming Japanese dramas but is not intended to be comprehensive.
View all posts by jadefrost →
This entry was posted in Summer 2016 Dramas, TV Tokyo and tagged Namase Katsuhisa, Otoko Meshi. Bookmark the permalink.