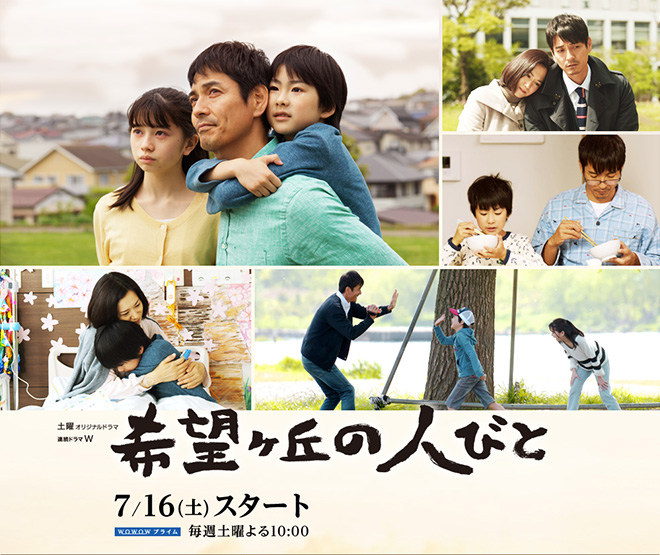 Story
Tajima Toru works for a publishing company. He lives happily in Tokyo with his wife Keiko, their daughter Mika, who will be a second-year junior high school student this spring, and son Ryota, a third grader in elementary school. But one day, Keiko is found to have end-stage cancer and she passes away in a mere three months with the family by her side. Keiko was the sunshine of the family. Now that she is gone, there is a gaping hole in their hearts. Tajima tries to live as if nothing has changed and force smiles. However, he soon realises that his attempt to forget is impossible. Right before Keiko died, she spoke about wanting to move to Kibougaoka, where she spent her teens, if her illness was cured. One day, Tajima suggests to his children that they go to Kibougaoka and make a trip down memory lane. They end up making their way to Keiko’s vacant old house. Tajima happens to meet Keiko’s former classmate Fujimura Kaori. He instinctively asks if his children would like to live there. Mika and Ryota agree. And so, the Tajimas begin a new life at Kibougaoka, but … …

Characters
Sawamura Ikki as Tajima Toru
He resigns from his job at a publishing company and moves to the town where his late wife, Keiko, grew up. He is kind but a little unreliable.

Wakui Emi as Tajima Keiko
Tajima Toru’s wife. She passes away suddenly of pancreatic cancer. She was devoted to her family and a woman of fortitude.

Sakurada Hiyori as Tajima Mika
Tajima Toru’s daughter. A second-year junior high school student. She takes charge of the household chores in place of her mother. She is A dependable person like her mother.

Ninomiya Keita as Tajima Ryota
Tajima Toru’s son. A third grader in elementary school. He is a mild, pampered child whose personality is like his father’s.

Miyakawa Ichirota as Miyajima
Tajima Keiko’s former classmate in junior high school who had one-sided feelings for her.

Hiraizumi Sei as Honjo Zuiun
A teacher of the calligraphy class that Tajima Keiko once attended. He is stubborn and eccentric.

Terawaki Yasufumi as Abe Kazuhiro
Tajima Keiko’s first boyfriend and a former delinquent. He is now the owner of a cafe and bar called ‘Gold Rush’.

This blog contains information and musings on current and upcoming Japanese dramas but is not intended to be comprehensive.
View all posts by jadefrost →
This entry was posted in Summer 2016 Dramas, WOWOW and tagged Hiraizumi Sei, Kibougaoka no Hitobito, Sakurada Hiyori, Sawamura Ikki, Wakui Emi. Bookmark the permalink.