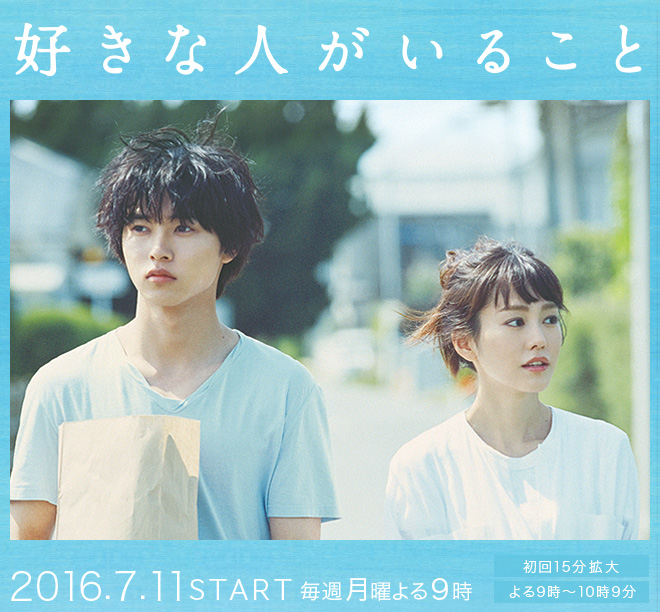 Story
Sakurai Misaki is a patissier who dreams of having her own business in the future and has prioritised work to the extent that she has forgotten how to kiss. One day, she is suddenly dismissed and has difficulty finding a new job. A homemade wedding cake she brings to present at a prestigious hotel’s mid-career recruitment examination is not well-received by the judges. As a result, she is not hired. Misaki complains about it at a restaurant. Her junior Ishikawa Wakaba points out that it was because the kissing mouths on the faces of the figures decorating the cake protruded too much. Wakaba leaves first for a date while Misaki hides in a toilet cubicle and feels a surge of bitter disappointment. When she has composed herself and tries to go out, the door will not open. After a short while, a restaurant staff comes in search of her. The person who pries open the door is Shibasaki Chiaki, Misaki’s first love in high school. Misaki tells him how she is doing, but lies that she is a patissier for a first-class hotel and taking a break now because the kitchen is being refitted. Chiaki invites her to live-in and work at his seaside restaurant in Shonan in the interim. When Misaki arrives at Shonan and attempts to look for someone to take a photo of her on the sandy beach, a surfer appears. Shoving her smart phone at him, she tries to make him capture the moment of her jump, but she ends up falling. She is photographed covered by the waves and dripping wet. But the guy just brusquely leaves. Misaki arrives at the Shibasaki home. Then she is hugged from behind by a guy. Misaki hopes that it is Chiaki, but it is someone else who introduces himself as Toma. He says he is Chiaki’s younger brother and that they live together. Then the guy who was at the beach earlier also shows up. He says he is the second brother, Kanata, and is the restaurant’s chef. Misaki ends up spending the summer living with the three handsome siblings!?

Characters
Kiritani Mirei as Sakurai Misaki
A patissier. She has completely neglected romance to the extent that she has even forgotten how to kiss. She keeps going around in circles because of her straightforward personality. The pastry department at the company that she had been working is gone and she meets Shibasaki Chiaki, her first love in high school again, just as she is searching for a job. She decides to work at his restaurant Sea Sons and live with him in a shared house. However, his younger brothers Kanata and Toma also stay there. Although she makes an effort to work in high spirits, she gets treated harshly by Kanata, but … …

Yamazaki Kento as Shibasaki Kanata
The second son of the Shibasaki family. He is the charismatic chef of the restaurant ‘Sea Sons’ that he runs wih his siblings. He is a good cook but has quite a sharp tongue. He has a pompous personality because he is a perfectionist. He does not acknowledge that Sakurai Misaki is a patissier. He treats her with scorn because he says her intention is romance and she is fooling around at work.

Miura Shohei as Shibasaki Chiaki
The eldest son of the Shibasaki family. Sakurai Misaki’s first love. A capable “restaurant producer” who has several restaurants in Tokyo besides running the seaside restaurant Sea Sons. He is always kind and the ideal prince charming.

Nomura Shuhei as Shibasaki Toma
The third son of the Shibasaki family. He is talkative and easily gets carried away. The typical playboy who is always nice to females. He attends a cooking school, but always keeps cutting classes … …

Ohara Sakurako as Nishijima Manami
A mysterious female who suddenly arrives at the restaurant Sea Sons one day. She gets near to the Shibasaki siblings and is trying to search for something.

Iitoyo Marie as Ninomiya Fuka
A classmate at the cooking school that Shibasaki Toma attends. She worries that he keeps on skipping school, but always gets pushed around by him.

Nanao as Takatsuki Kaede
Shibasaki Chiaki’s university classmate. A pianist who is studying in Boston. Chiaki asserts that they are just friends because she has high specifications. What is her real relationship with him?

Yoshida Kotaro as Higashimura Ryo
An influential, charismatic man in the F&B industry who runs a large, diverse chain of restaurants with many outlets nationwide.

This blog contains information and musings on current and upcoming Japanese dramas but is not intended to be comprehensive.
View all posts by jadefrost →
This entry was posted in Fuji TV, Summer 2016 Dramas and tagged Kiritani Mirei, Miura Shohei, Sukina Hito ga Iru Koto, Yoshida Kotaro. Bookmark the permalink.