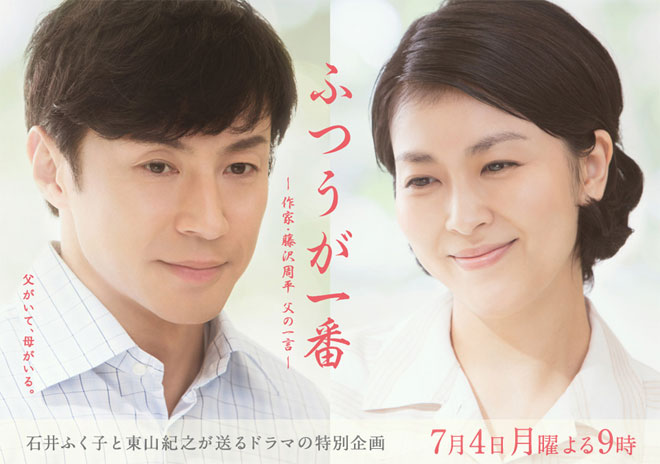 Date: From 9.00 p.m., 4 July 2016
Original Work: Fujisawa Shuhei Chichi no Shuuhen & Chichi Fujisawa Shuhei to no Kurashi by Endo Nobuko
Scriptwriter: Kurotsuchi Mitsuo (Itooshikute)
Cast: Higashiyama Noriyuki, Matsu Takako, Kadono Takuzo, Sato Bsaku, Maeda Gin, Shinoda Saburo, Kumagai Mami, Kusabue Mitsuko
Synopsis: In 1963, Naoki Prize-winning writer Fujisawa Shuhei (Higashiyama Noriyuki) was a reporter for Shokuhin Shimbun using his real name Kosuge Tomeji. Eight months after the birth of their daughter Nobuko, his wife passed away. Tomeji sent for his sickly mother Takie (Kusabue Mitsuko) from his hometown of Yamagata and they lived together. Even though they were poor because of his meagre salary, he gave top priority to time with his family. One day, Nobuko (Inagaki Kurumi), who was now attending kindergarten, was in low spirits. When Tomeji asked her out of concern, she said her teacher had told them to get their mothers to make a tote bag. Tomeji made one by patching together worn-out business suits late into the night so she would not feel sad. At that time, Tomeji decided to remarry Takazawa Kazuko (Matsu Takako), whom he had been dating for quite a while. Kazuko was attracted both to Tomeji’s honesty and love for his family, but her father Shotaro (Maeda Gin) was vehemently opposed to the marriage. However, Kazuko’s feelings were strong and she soon started a new life with Tomeji. The living expenses handed over by Takie who controlled the family’s finances was 500 yen a day. Kazuko somehow managed to get by on that limited amount and the Kosuge family lived peacefully. But when Nobuko (Kobayashi Seiran) started elementary school, she entered a rebellious phase and frequently came into conflict with Kazuko too. One day, some matter prompted Kazuko to scold Nobuko. Nobuko answered back defiantly and Kazuko … …
Official Website: www.tbs.co.jp/futsu-gaichiban

This blog contains information and musings on current and upcoming Japanese dramas but is not intended to be comprehensive.
View all posts by jadefrost →
This entry was posted in Summer 2016 Drama Specials, TBS/MBS and tagged Futsuu ga Ichiban, Higashiyama Noriyuki, Kusabue Mitsuko, Matsu Takako. Bookmark the permalink.