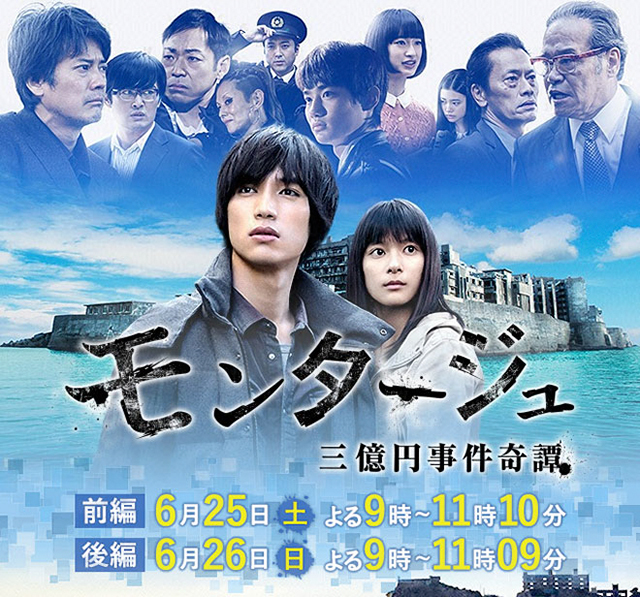 Story
On 10 December 1968, the greatest unsolved crime of the 20th century, the 300 million yen heist, took place in Fuchu, Tokyo. Despite the unprecedented scale of the investigation – 170,000 investigators were mobilised, the criminal was never caught and the statute of limitation passed. In 2009 in Nagasaki, Narumi Yamato, a third-year high school student, is on the route from school with his childhood friend Odagiri Miku. They discover a pool of blood on the ground and blood stains on the wall too. When they follow the trail of blood, they find that a dying old man Shoji Akira has collapsed at a dead-end street. Yamato is abruptly told by Shoji, “Your father is the 300 million yen heist criminal. Don’t trust anyone.” He tries to ask what Shoji really means. But those are Shoji’s last words to him before passing away. Yamato’s missing father, Narumi Tetsuya, is discovered to have drowned far away in Tokyo three days later … … Yamato, who was brought up by his father after his mother died early, has lost both parents at a young age. Miku’s father Takeo, an admirer of Tetsuya since young, cannot leave Yamato alone. And so, Yamato ends up living together with the Odagiris. Time passes. Yamato, now 25, has graduated from high school but does not continue his education or find employment. He just spends his days idly as a part-time worker. Without a purpose in life, Yamato is aimless. He fantasises about the words that Shoji told him seven years ago as if to bury his discontent and starts to look into the details of the 300 million yen heist. Around that time, Yamato gives away his father’s kendo gear, which had been a memento, to Takeo. He only gets the embroidered name tag with the word ‘Narumi’ and has an uncomfortable feeling about this. When he cuts open the seam, there is a folded, old 500 yen bank note inside and it has spattered blood. Yamato hastily checks documents related to the 300 million yen heist. Of the bank notes that were stolen in the heist, only the serial numbers of 2,000 500 yen bank notes are known and covered in the documents. When he checks the serial number on the 500 yen note in his hand, it corresponds to a number in the document. Why has a bank note stolen in the 300 million yen heist been hidden in his father’s kendo gear? Meanwhile, Takeo also discovers the note from Tetsuya’s glove. Several days later, Takeo and Miku’s mother Yoko go missing. Suspecting that their disappearance is related to the 300 million yen heist, Yamato finds the note that Takeo discovered from Tetsuya’s glove. He realises that the couple is headed for Gunkanjima, the “coal island” they had once boasted of having unprecedented prosperity which was now a remote island with no inhabitants. Yamato and Miku reach Gunkanjima in pursuit of her parents. They find a bag stuffed with old 10,000 yen bank notes believed to have been stolen in the 300 million yen heist from the location written in the note. However, Takeo and Yoko are not there. When Yamato and Miku return from Gunkanjima with the 300 million yen, they meet two groups of men. One man is a Nagasaki detective, Sekiguchi Jiro, who questioned them in 2009 about the circumstances of Shoji’s death. The other man is Yamada, a gangster. Just as Yamato and Miku are feeling uncomfortable with the alarming atmosphere, a car appears in front of them with Suzuki Taisei behind the wheel. A preparatory school teacher, Taisei is also a pupil at the kendo hall that Miku’s father runs and an old friend of Yamato and Miku. With Taisei’s help, Yamato and Miku manage to escape from Sekiguchi and Yamada. After failing to catch the two of them, Sekiguchi kills the owner of the rental boat shop nearby although he is a detective. He then pins the crime on Yamato and Miku and the two of them end up on the wanted list. Sekiguchi was also the one who murdered Shoji in 2009. Pursued by the police as suspects in a murder that they did not commit, Yamato and Miku flee from Nagasaki to Fukuoka and then Tokyo, with the 300 million yen discovered at Gunkanjima. They unwittingly get engulfed by the big case in the complex web of people’s ulterior motives. Will Yamato and Miku be able to get to the truth of his father’s mysterious death and the 300 million yen heist.

Characters
Fukushi Sota as Narumi Yamato
Framed for a murder that they did not commit, he and Odagiri Miku find themselves forced to run away. He is quick witted each time, occasionally slipping from the police and boldly maneuvering the people who know the truth of the 300 million yen. Despite interference by various people and struggles, he moves forward one step at a time, based on a firm conviction to get to the bottom of his father’s mysterious death and the 300 million yen heist.

Yoshine Kyoko as Odagiri Miku
A childhood friend of Narumi Yamato. She and Yamato are pursued by the police as suspects in a murder that they did not commit, and flee from Nagasaki to Fukuoka and then Tokyo. She has had a taste of kendo since she was a child because of the influence of her father Takeo, who is a kendo expert, and she is quite skilled. These skills also save her in crucial moments while she is on the run … …

Gekidan Hitori as Suzuki Taisei
A preparatory school teacher. is also a pupil at the kendo hall that Miku’s father runs and an old friend of Narumi Yamato and Odagiri Miku. Although he helps to orchestrate their escape, Yamato does not trust him.

Nomura Shuhei as Kawasaki Yudai
Born in Gunkanjima, he came to Fuchu in Tokyo in 1967 at the age of 17. A childhood friend of Sawada Shinnosuke from the same hometown. After he came to Tokyo, he made the acquaintance of Inoue Kazuko, Mochizuki Ryu, Kyoko Gibson and Yokomizo Tamotsu. His cheerful, lively personality endeared himself to everyone but some incident led to his deep involvement in the 300 million yen heist.

Kadowaki Mugi as Inoue Kazuko
A university student who had a love for Miles Davis. She met Kawasaki Yudai at the jazz bar where he worked and they started dating. She dreamt of opening a jazz cafe with Yudai.

Endo Kenichi as Sekiguchi Jiro
An unscrupulous police officer who set Narumi Yamato and Odagiri Miku up as murder suspects. He pursues them on the orders of the powerful politician Sawada Shinnosuke who holds the key to the 300 million yen heist.

Kagawa Teruyuki as Shoji Akira
An old man who told Narumi Yamato, “Your father is the criminal in the 300 million yen heist” before passing away. As Yamato and Odagiri Miku go after the truth of the heist, it becomes clear that he was a detective who had been in charge of the case at Fuchu Minami Police Precinct. Although Mochizuki Ryu and the group of delinquents bothered him, they were impossible to hate and he dealt with them with love.

Karasawa Toshiaki as Narumi Tetsuya
Narumi Yamato’s father. He was described as the “300 million yen heist criminal” by Shoji Akira and his drowned body was discovered in Tokyo in 2009, but … …

Miura Takahiro / Nishida Toshiyuki as Sawada Shinnosuke
An influential politician who serves as the secretary-general of the Minwa Party. The person who holds the key to the 300 million yen heist, he seeks the whereabouts of Narumi Yamato and Odagiri Miku through Sekiguchi Jiro. Before he became a politician, he was a detective at Fuchu Minami Police Precinct who pursued the 300 million yen heist. Born in Gunkanjima, he and Kawasaki Yudai were childhood friends. After he came to Tokyo, he worried about Yudai who was getting friendly with delinquents.

Shibuya Kento as Mochizuki Ryu
The leader of a group of delinquents who are mainly active in Fuchu. He is saved by Kawasaki Yudai just as a quits being a gangster and their friendship deepened after that.

Horan Chiaki / Natsuki Mari as Kyoko Gibson
A mysterious woman who runs a bar in Okinawa. Narumi Yamato and Odagiri Miku meet her while pursuing the truth of the 300 million yen heist. She seems to have had an involvement in the case … … She was Mochizuki Ryu’s girlfriend and always worried about him because he was constantly reckless.

David Ito as Odagiri Takeo
Odagiri Miku’s father. A kendo expert who runs a kendo hall. He looked up to Narumi Tetsuya who was a fatherly figure to him.