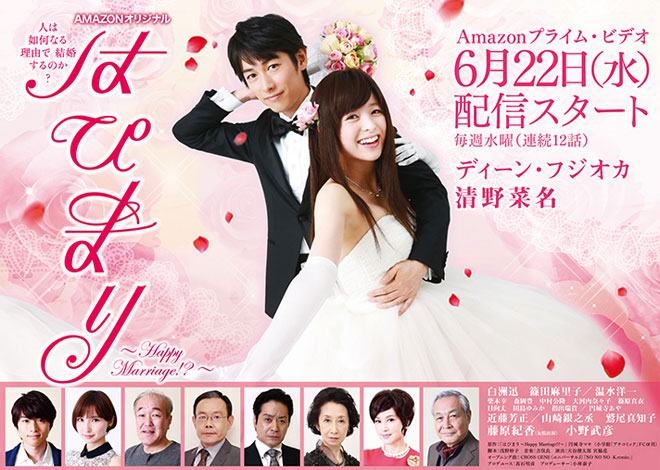 Broadcast
From 22 June 2016 (updated on Wednesdays)

Story
23-year-old Takanashi Chiwa is an office lady in the day, and at night she works part-time at a club to pay off her father’s debts. However, she is a girl who overcomes challenges with characteristic cheerfulness. One day, Chiwa gets into a quarrel with a wealthy, handsome customer who has come to the club, and is fired from her part-time job. The next day, a depressed Chiwa is summoned by her boss and finds the rude man from the day before down there. This man’s name is Mamiya Hokuto, a salaryman with an annual income of 50 million yen. Hokuto arrogantly proposes to Chiwa all of a sudden, “I’ll pay your debts so marry me”. Chiwa is initially resistant to the idea of a contract marriage because she wants to marry someone she develops feelings for. But she is under increasing pressure to repay the debts and has no choice but to accept his proposal. They register their marriage and start their newly married life together. At first, Chiwa is hostile to the proud and selfish Hokuto. However, she meets Hokuto’s secretary Soma Taeko and a workplace junior Yagami Yu, and as she comes in contact with his past, she gradually finds herself drawn to him. Meanwhile, Hokuto finds comfort in Chiwa’s cheerfulness and kindness. Then Hokuto inherits Mamiya Holdings on the orders of the chairman. But all sorts of difficulties lie ahead for the sadistic Hokuto and an inexperienced Chiwa. His family treats him coldly because he is the son of a mistress and there is a deeper reason why Hokuto chose to marry Chiwa. The two of them encounter various people and eventually overcome the odds to become a real couple.

This blog contains information and musings on current and upcoming Japanese dramas but is not intended to be comprehensive.
View all posts by jadefrost →
This entry was posted in Amazon Prime, Summer 2016 Dramas and tagged Dean Fujioka, Hapimari ~ Happy Marriage!?, Ono Takehiko, Seino Nana. Bookmark the permalink.