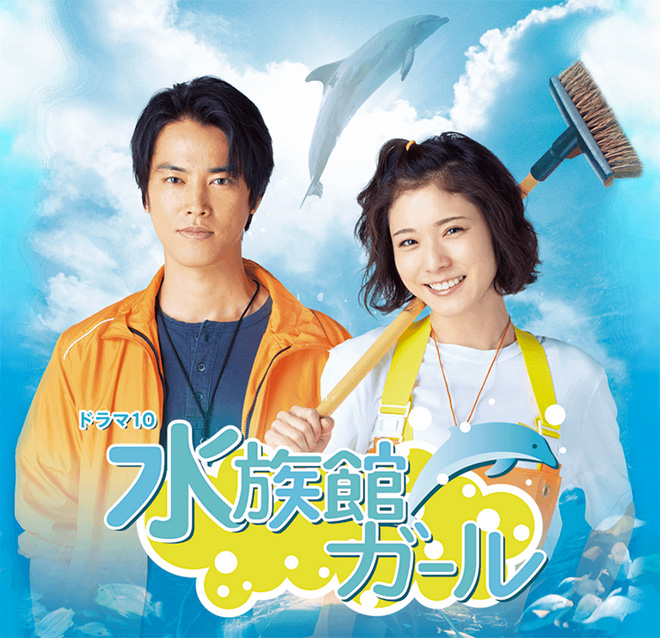 Story
Shima Yuka is an office lady who has worked for Yotsuboshi Trading, a large trading company, for three years. However, she constantly makes mistakes such as losing a portion of an important contract, is overfriendly and keeps getting into the black books of her boss. Yuka is eventually ordered to transfer to the affiliated Hamakaze Aquarium’s Marine Animals Division. Facing living creatures every day is a sharp contrast to the life of an office lady that she is used to and the inexperienced Yuka constantly fumbles. Daily training with the stern Kaji Ryohei; geeky, taciturn Imada Shuta; sisterly Yoshizaki Kazuko; the cool head of the General Affairs Department Kurano Hisayuki and mysterious aquarium director Utsumi Ryotaro is just like a typhoon. Even the dolphins that she is in charge of are uncooperative. Even so, Yuka runs into the wall with her naturally positive personality and begins to look more like a staff of the aquarium as she learns about the inner workings of her colleagues. However, a job dealing with living creatures is never something that practice and fighting spirit alone can solve … … One day, her boss at the headquarters, Morishita Yoji, who was the one that ordered her transfer, shows up at the aquarium and Yuka learns an unexpected fact.

Characters
Matsuoka Mayu as Shima Yuka
An “incapable” office lady who has worked at the large trading company, Yotsuboshi Trading, for three years. She is not good at keeping her distance with people. She has been dumped by her boyfriend. One day when she is at the lowest point in both romance and work, she is suddenly ordered to transfer to Hamakaze Aquarium. At the aquarium, she is tested by the dolphins and put through harsh training by her seniors. In the process of working to get Kaji Ryohei’s recognition, she wakes up to the work of an aquarium staff and grows to be a strong person.

Kiritani Kenta as Kaji Ryohei
The head of the Marine Animals Division at Hamakaze Aquarium. Although he is curt, he has a deep love for animals. He distrusts headquarters, which has little regard for the aquarium, and treats Shima Yuka harshly. He caused someone important to him to die in an accident while diving during his student days and has remained tortured by it. He gradually realises that Yuka has the qualities to become a trainer and starts to recognise her enthusiasm.

Toda Keiko as Shima Kyoko
Shima Yuka’s mother. She is a person with a sharp tongue and does not mince her words. But she has thorough knowledge of her daughter’s good and bad points and encourages her in a few words. She has good instincts and finds out Yuka’s secrets one by one.

Sawabe Yu as Imada Shuta
The head of the Fisheries Division at Hamakaze Aquarium. He has superior knowledge of fishes because he is a nerd. He devotes himself full-time to breeding the fishes that he loves and has not had a girlfriend in 30 years. He is shy and his subordinates have little faith in him.

Adachi Rika as Koshiba Kumiko
A straight-A student who has been together with Shima Yuka in high school, university, the workplace and even matchmaking parties. She likes and envies Yuka’s kindness and cheerfulness. She starts to feel inspired by Yuka who starts to mature after being trained at the aquarium.

Nishimura Motoki as Yagami Takuya
An elite, promising candidate at Yotsuboshi Trading. Shima Yuka’s ex-boyfriend, but he has been trying to forget that they were once in a relationship. However, he starts to be charmed by Yuka again now that she is working with vigour and enthusiasm at the aquarium.

Nishida Naomi as Yoshizaki Kazuko
A staff of Hamakaze Aquarium’s Marine Animals Division, she is mainly in charge of penguins. A talkative, sisterly veteran who has a bad mouth, but is caring. She does not talk much about her family, but is always thinking about her only son who is overseas.

Ishimaru Kanji as Kurano Hisayuki
The head of Hamakaze Aquarium’s General Affairs Division. He is torn between headquarters’ emphasis on sales and the love for animals on the ground, and always has a stomachache. He used to be a high-flying securities salesman and is called a penny-pinching monster. But he actually loves animals very much.

Ito Shiro as Utsumi Ryotaro
The director of Hamakaze Aquarium who appears carefree and does everything from tending to plants to making props. But in fact, he is a capable man who saved the firefly squid of Hokuriku from extinction and loves the aquarium. He accepted Shima Yuka’s secondment because of some consideration.

This blog contains information and musings on current and upcoming Japanese dramas but is not intended to be comprehensive.
View all posts by jadefrost →
This entry was posted in NHK, Summer 2016 Dramas and tagged Ito Shiro, Kiritani Kenta, Matsuoka Mayu, Suizokukan Girl, Toda Keiko. Bookmark the permalink.