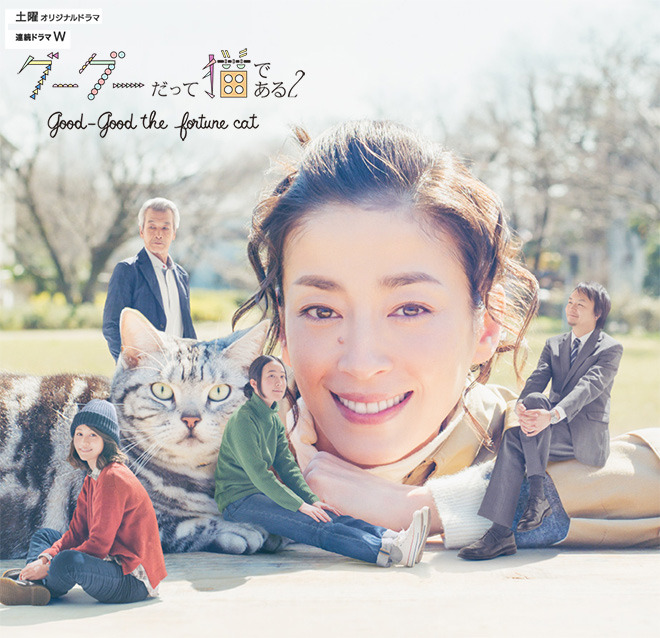 Story
Popular, talented manga writer Kojima Asako lives with her two cats Gugu and Bee at a home office that commands a view of Kichijoji’s Inokashira Park in Tokyo. Her assistant Manami has been busy every day, offering her support. But Manami has begun thinking of striking out on her own as a manga writer. Meanwhile, a fellow assistant Iida Chisato applies to be Manami’s replacement. However, she actually dislikes cats. Kagawa, a detective past middle age, visits Asako’s home. He asks her to let him stakeout at her house to arrest a murderer, but … … Meanwhile, the editor Omori, who has been in charge of Asako for a long time, gets married, but he cannot bring himself to tell Asako. Then Asako hears rumours that the missing homeless man, who left Gugu in her care, was seen at Mt Fuji and she sets out on a journey to search for him.

Characters
Miyazawa Rie as Kojima Asako
A popular manga writer who lives a quiet life in Kichijoji, Tokyo with her pet cats Gugu and Bee.

Nagatsuka Keishi as Omori
Kojima Asako’s long-time editor in charge. He is a kind person who is concerned about Asako and naturally both Manami and Iida too.

Kuroki Haru as Manami
Kojima Asako’s capable assistant. She has started to think of striking out on her own as a manga writer.

Tanaka Min as Akama
A man seems a lot like a homeless person. He disappears after he entrusts Gugu to Kojima Asako.

Nishida Naomi as Tomoko
Kojima Asako’s ex-classmate from university days. The loudness of her voice has not changed even though she is now an adult and still cannot get rid of her Hiroshima accent. Asako happens to be reunited with her.

Issey Ogata as Kagawa
A detective of Musashino Police Prince. He rents the second floor of Kojima Asako’s home to investigate a case.

This blog contains information and musings on current and upcoming Japanese dramas but is not intended to be comprehensive.
View all posts by jadefrost →
This entry was posted in Spring 2016 Dramas, WOWOW and tagged Gugu datte Neko de Aru Series, Issey Ogata, Kikuchi Rinko, Kuroki Haru, Miyazawa Rie. Bookmark the permalink.