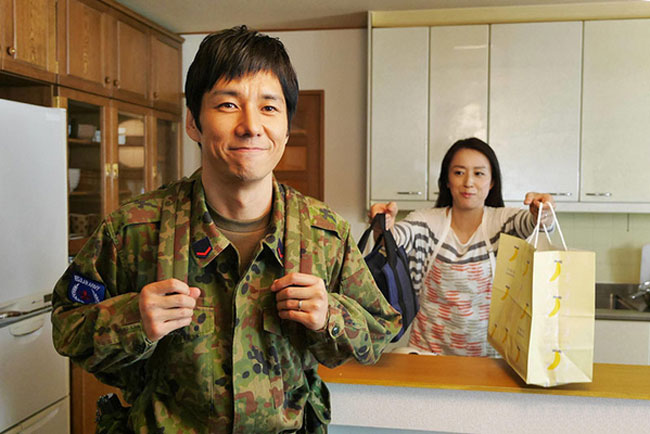 Kayoi no Guntai
Story: The Japan that Maejima Keiichiro (Nishijima Hidetoshi) lives in undergoes a global natto boom. New Ibaraki declares independence from Japan and keeps on fighting with government troops. The company that Maejima works for has delivered defective rifles and he is instructed by his boss to apologise to the government troops for causing inconvenience. When Maejima goes to offer his apologies, the battlefield has turned into white-collar salarymen. Maejima is supposed to come back immediately. But when he realises it, he has joined the battle and also starts to feel a sense of worth. A startling outcome awaits him … …
Cast: Nishijima Hidetoshi, Nakamura Yuko, Magy

Yumemiru Kikai
Story: Nomazaki Kenji (Kubota Masataka) is a young man who dreams of becoming a manga artist as he continues drawing, but has difficulty getting recognition. He is told by his parents to be realistic and consider getting a job. While Kenji is having his usual quarrel with his mother (Funaki Sachi), she suddenly collapses after he pushes her out of his room. And he gets a momentary shock. His mother is actually a machine. His girlfriend Inaba Keiko (Ishibashi Anna) gives him encouragement, but Kenji witnesses one shocking fact after another and gets sent over the edge. The decision he makes is … …
Cast: Kubota Masataka, Ishibashi Anna, Sumire, Yamaji Kazuhiro, Ono Ryo, Funaki Sachi

Quiz no Ossan
Story: Koga Saburo (Takahashi Issei) is sick of the monotony of daily life. Wanting a slight change, he casually appears on a quiz show. It is the start of everything. Saburo wins the quiz and is given 1 million yen in prize money and a year’s worth of quizzes! He wonders what it will be. The next day, a mysterious middle-aged man (Matsushige Yutaka), who sets questions, appears in front of him. Saburo gets followed about by the quiz man. This is the beginning of bizarre days for both the man and Saburo.
Cast: Matsushige Yutaka, Takahashi Issei, Fujimoto Izumi

Bijinzei
Story: The Japanese government introduces a beauty tax while finances are tight. Beautiful women are bought meals by men. They are treated kindly when other people are being scolded and benefit in life. That is why they have to pay tax. The beautiful Kijima Aiko’s (Sasaki Nozomi) tax is a whopping 20%. She is absolutely unhappy with it, but gradually starts to feel a sense of superiority for being identified as a special beauty by the government. However, Aiko is pushed into a corner as the beauty tax starts triggering a series of unexpected situations. Then a wonderful guy, Nonomura Kenichi (Urai Kenji), shows up in front of her … …
Cast: Sasaki Nozomi, Urai Kenji, Nakamura Anne, Sugimoto Aya

This blog contains information and musings on current and upcoming Japanese dramas but is not intended to be comprehensive.
View all posts by jadefrost →
This entry was posted in Fuji TV, Spring 2016 Drama Specials and tagged Kubota Masataka, Matsushige Yutaka, Nishijima Hidetoshi, Takahashi Issei, Yo ni mo Kimyouna Monogatari Series. Bookmark the permalink.