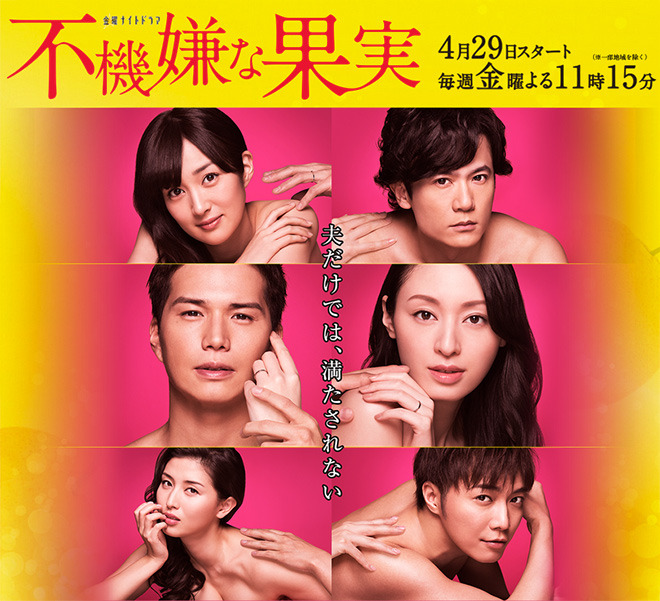 Story
32-year-old housewife Mizukoshi Mayako has been married for five years, but she is completely neglected by her husband Koichi and gets a cold reception at work every day too. She has gloomy thoughts over every little thing and wonders if she made a loss by choosing the wrong husband. Then on a day just before her birthday, Koichi asks her for a rare meal. Mayako is touched by her husband’s tenderness and joy wells up. But little does she know that he is bringing her to his parents’ home of all things. What awaits her is a hellish birthday part with her mother-in-law whom she does not get along with. And the bad things continue within a few days … … She hears from the lawyer Minamida Norio, who had intended to “keep” her, that he is marrying a young woman. Mayako is overcome with surprise by this humiliating development which she had not anticipated at all. This convinces her that she has definitely made a great loss. At that moment, Mayako’s friend from university days, Takeda Kumi, opens a wine bar with the alimony she has obtained through her divorce. Mayako goes to the bar together with another friend Toyama Reiko, and discovers a familiar name among the congratulatory flowers for the opening. It is Nomura Kengo, the ad man whom Mayako had had a fling with when she was still single. She has not been in contact with Nomura for a number of years and gives a forced smile at Reiko’s dare to get in touch with him. But in her heart, it is not altogether a bad idea to occupy her boring routine and stone-cold heart. Then something unexpected happens. Mayako carelessly splashes red wine on Kudo Michihiko, who is playing the piano in the bar. He leaves the place quietly without even taking money for laundry from a flustered Mayako. This is a fleeting incident. But at that point, little do the two of them know that this encounter is about to change their lives greatly … … Before long, Michihiko starts pursuing her intently even though he knows that she is another man’s wife. Her heart is stolen by him and she indulges in a forbidden love, seeking happiness and acting on instinct.

Characters
Kuriyama Chiaki as Mizukoshi Mayako
A housewife who has been married for five years. she lives with her husband, Koichi, who is a company employee, and they have no children. She had been popular with guys since university days and confident of her own looks. Even now, she has no doubts about her attractiveness. However, her husband no longer sees her as a woman and she is treated coldly every day. They have not had sex in three years. At work, she is a secretary for the law firm of the popular lawyer Tsukui Tetsuya, but is looked down by her boss there too. Her discontent grows. Then one day, she is reunited with Nomura Kengo whom she had a fling with when she was single and a relationship starts to develop. She soon encounters music critic Kudo Michihiko. They are drawn to each other and she awakens to true love, but … …

Ichihara Hayato as Kudo Michihiko
A critic of classical music. He had stayed abroad for work for an extended period of time until fairly recently. After returning to Japan, he encounters Mizukoshi Mayako as a result of an accident that must be called a “mischief of fate”. He falls in love at first sight with Mayako. He is passionate, puts his heart and soul into everything and plunges straight on. Even with Mayako, he ardently woos her without hesitation although he knows that she is another man’s wife.

Manda Hisako as Mizukoshi Ayako
Mizukoshi Mayako’s mother-in-law. She dotes on her only son Koichi obsessively. Although she is cultured and sensible, she is dissatisfied with her daughter-in-law who has never given her a grandchild. Each time they meet, she will attack Mayako with snide remarks.

Takanashi Rin as Takeda Kumi
Mizukoshi Mayako’s friend from university days. She is the type who is cool towards everything and lives down to earth. She divorced because of her husband’s infidelity and sinks all the money obtained in the settlement, into a wine bar. She says that she cannot trust men and has no intention to marry again. She displays disgust at affairs and even warns a discontented Mayako not to go astray. In truth, she has a terrible secret that she cannot disclose to Mayako and the others … …

Narimiya Hiroki as Nomura Kengo
A guy whom Mizukoshi Mayako had a fling with when she was single. He works for a large advertising agency. He is competent and is doing well. Even though he is married, he has a colourful life and constantly dates several women. He meets Mayako, who called on the pretext of asking him to arrange concert tickets, again after a few years. She charms him with her smart manner and sweet, risque words. A relationship starts to develop between them … …

Inagaki Goro as Mizukoshi Koichi
Mizukoshi Mayako’s husband. He graduated from a famous top univeristy and is now the head of the sales department of a large metal manufacturer. He does not feel that his wife whom he has been married to for five years, is a woman and treats her like a housewife. And yet his desire to possess and monopolise is more than others and he believes Mayako will not have an affair. He is temperamental and fussy about cleanliness. He drives to his parents’ home and likes nothing better than to spend every weekend with his mother. In fact, he has a terrible secret that he is hiding from Mayako.

This blog contains information and musings on current and upcoming Japanese dramas but is not intended to be comprehensive.
View all posts by jadefrost →
This entry was posted in Spring 2016 Dramas, TV Asahi and tagged Fukigenna Kajitsu (2016), Inagaki Goro, Kuriyama Chiaki, Mitsuishi Ken, Narimiya Hiroki. Bookmark the permalink.