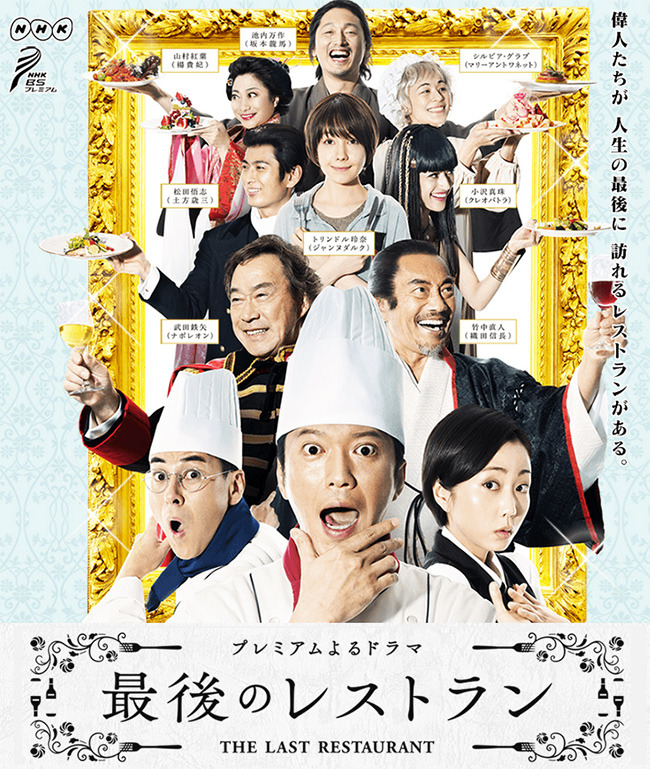 Story
Sonoba Shinogu is the owner and chef of a modern-day French restaurant called ‘Heaven’s Door’. He has topnotch culinary skills, but a flawed personality. Ever since he took over the restaurant from his late father, its turnover has declined. One day, Oda Nobunaga suddenly travels through space and time and appears before Sonoba. He was cornered by Akechi Mitsuhide at Honnoji. Once Nobunaga prepared himself for suicide, he felt very hungry. He wants to commit suicide after he eats delicious food and orders a dumbfounded Sonoba to “make my first and probably last meal that no one has ever seen”. He points his sword at Sonoba without warning. Intimidated by Nobunaga’s challenge, Sonoba tries to flee stealthily but … … Nobunaga, Sakamoto Ryoma, Cleopatra, Joan of Arc, Napoleon … … are historical figures, who died violent deaths. They travel into the future to Heaven’s Door, where Sonoba has a go at the unreasonable orders of these great people and makes their souls rest in peace.

Characters
Tanabe Seiichi as Sonoba Shinogu
After his father passed away, he inherited the French restaurant ‘Heaven’s Door’, and became its owner and chef. Although he trained in France and has great culinary skills as well as creativity, he has the habit of immediately running away as a stopgap measure when he cornered. He has a cynical kindness and is an aloof, genius chef who is impossible to hate.

Kinami Haruka as Maeda Atari
The sommelier of ‘Heaven’s Door’. She is a calm, cool beauty. There is a strained atmosphere between her and Sonoba Shinogu. She is the manager behind the scenes who has been supporting the restaurant since his father’s time. She is knowledgeable about history and is a key person to fulfil the unreasonable orders of these great people.

Suzuki Kosuke as Mentsu Kakeru
The sous chef of ‘Heaven’s Door’, he has the nickname “Eternal #2”. He achieved second place in a culinary competition in Tokyo. Risking his chef’s position, he challenges the cowardly Sonoba Shinogu to culinary battles, and keeps opposing and cooperating with him over and over again.

Fukuda Mayuko as Ariga Chie
A student who saw a part-time recruitment notice and started work. She does not quit even though it is a restaurant where famous historical figures frequently travelled back in time, and continues working with a smile. She is fearless and cheerful. Her dream is to be a patissier.

Triendl Reina as Joan of Arc
France’s national heroine who was born a peasant girl and lived from 1412 – 1431. She was tried for witchcraft and heresy and burned at the stake at the age of 19.

Takenaka Naoto as Oda Nobunaga
A warlord of the Sengoku era who lived from 1534 – 1582. Akechi Mitsuhide raised a rebellion and he committed suicide at Honnoji at the age of 49 before he could unify the whole country.

Ozawa Maju as Cleopatra
An Egyptian pharaoh who lived from 63 to 30 BC. Known for her romantic liaisons and military alliances with the Roman leaders Julius Caesar and Mark Antony, she committed suicide after defeat by Roman troops led by Octavian.

Sylvia Grab as Marie Antoinette
An Austrian princess who lived from 1755 – 1793. She became the queen of France’s Louis XVI at 15. When the French Revolution broke out, she and her husband were confined. She was eventually sent to the guillotine at the age of 37.

This blog contains information and musings on current and upcoming Japanese dramas but is not intended to be comprehensive.
View all posts by jadefrost →
This entry was posted in NHK, Spring 2016 Dramas and tagged Kinami Haruka, Saigo no Restaurant, Suzuki Kosuke, Takeda Tetsuya, Tanabe Seiichi. Bookmark the permalink.