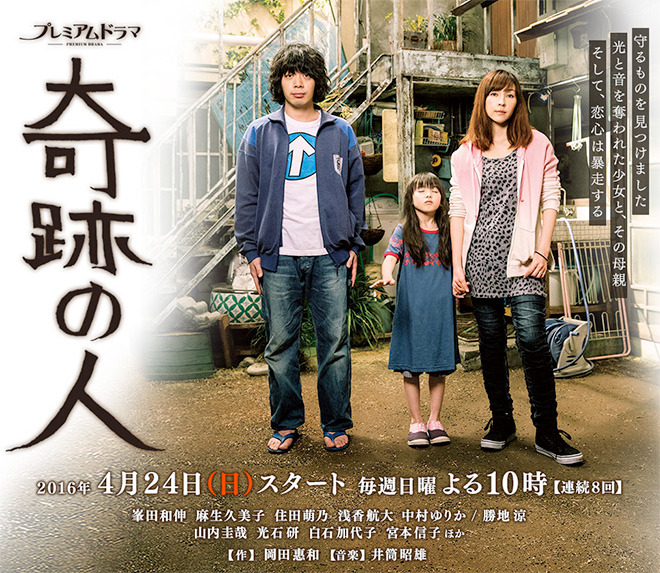 Story
Kamemochi is a useless guy who lives idly each day and will never get ahead in life. But one day, he happens to meet Tsurusato Hana and falls in love with her. A tough woman fighting against a harsh life, Hana has a daughter Umi who is both deaf and blind, and experiences all sorts of difficulties in daily life. She has problems finding a home to live in. Kamemochi, who has never had any accomplishments, decides that what he needs to do right now is to help mother and daughter. He implores the landlady of his own apartment to rent a room to Hana. Then making up his mind to become Umi’s teacher and teach her about the world, Kamemochi begins his first impulsive attempt in life and his single-minded thoughts create an incredible miracle.

Characters
Mineta Kazunobu as Kamemochi Kazutaku
A native of Yamagata Prefecture, he has not been good at swimming with the tide since he was a elementary school student and had no aspirations in junior high school. His only friend is rock music. He came to Tokyo somehow and aspired to be a musician but has not had any success nor popularity with females as he reaches the end of his 30s. He is truly a useless guy.

Aso Kumiko as Tsurusato Hana
She rebelled against society during her youth. Her husband Masashi suddenly went missing several years ago, and yet she has been looking after his grandmother while working hard to raise her deaf and blind daughter Umi. She is exhausted fighting with this cold society. Will she be saved through knowing the silly Kamemochi Kazutaku?

Sumida Moeno as Tsurusato Umi
She was born deaf and blind and still cannot say a word even though she is 7 years old now. She does not have the means to express her own emotions, but subtle changes appear through her interactions with Kamemochi Kazutaku.

Katsuji Ryo as Baba Santa
Kamemochi Kazutaku’s drinking buddy and the only person he can trust. A self-styled poet who is always asking himself, “What should be done to fight against this rotten world?” but he has not finished writing any poems in these nine years.

Miyamoto Nobuko as Tokura Fuuko
The landlady of Tokura Apartments. Her favourite phrase is, “A landlord is more or less a parent, a tenant is more or less a child”. She is a stern but kind motherly figure to the residents. Impressed by Kamemochi Kazutaku’s uncharacteristic desire to help Tsurusato Hana and her daughter, she ushers mother and child, who have been driven out of their house, to her apartment.

This blog contains information and musings on current and upcoming Japanese dramas but is not intended to be comprehensive.
View all posts by jadefrost →
This entry was posted in NHK, Spring 2016 Dramas and tagged Aso Kumiko, Kiseki no Hito, Okada Yoshikazu. Bookmark the permalink.