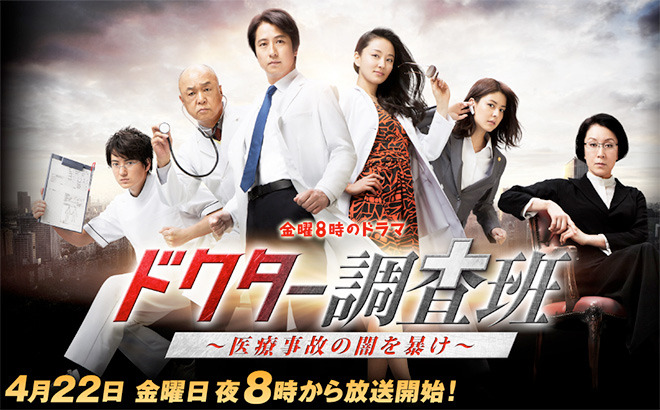 Story
It is estimated that between 1,300 to 2,000 people die because of medical accidents in Japan every year. The Medical Accident Investigation Committee (MAIC) was established with the objective of determining the causes of these accidents and preventing their recurrence. Its members – doctors and lawyers – conduct undercover investigations at suspicious hospitals and medical care facilities to expose the hidden truth and crush the malice lurking in the dark. Hanaoka Akira, a gastroenterologist, is the leader of the MAIC’s Seventh Unit. When he has doubts about a place he has infiltrated, he will tenaciously investigate until he gets proof and zeroes in on the truth. One day, Akira and the members receive orders from MAIC’s director Toyama Akiyo to investigate a medical accident that happened at Myoe Medical University Hospital. According to an anonymous tip-off, three kidney cancer patients that the doctor Mizukawa Ryoichi was in charge of, developed kidney failure after laparoscopic surgery and died. Akira infiltrates the hospital posing as a surgical nurse and approaches Mizukawa while team members Kamoshida Mitsugu and Iwasaki Sawa pretend to be patient and daughter and start investigating within the hospital. Mizukawa surprisingly enjoys a good reputation as a skillful doctor and they cannot find anything that suggests foul play. However, only Akira feels something is at odds. Meanwhile, Toyama meets Mizukawa’s boss Professor Onodera and leaves words heavy with meaning, “Let’s talk about the numbers.”

Characters
Tanihara Shosuke as Hanaoka Akira
The leader of the MAIC’s Seventh Unit. A gastroenterologist. He ends up forming the team of idiosyncratic members and there are times when he runs about in confusion alone too.

Nakagoshi Noriko as Iwasaki Sawa
A member of the MAIC’s Seventh Unit. A physician. She has a hearty and cheerful personality, and is composed at all times. There are occasions when her behaviour is more like the team leader than Hanaoka Akira.

Oshinari Shugo as Saotome Atsuro
A member of the MAIC’s Seventh Unit. A pathologist. He likes researching biological viruses and even excels at analysing IT-related viruses, but this is not used in undercover investigations at present. He is a strange character who is somewhat unable to read situations.

Fujii Mina as Tabuchi Yuko
A member of the MAIC’s Seventh Unit. A lawyer. She has a cold and rational personality. She even responds coolly to the advances of Saotome Atsuro who is unable to read situations. She goes all out even for investigations using seductive techniques.

Tayama Ryosei as Kamoshida Mitsugu
A member of the MAIC’s Seventh Unit. A orthopedic surgeon. After he graduated from a third-class university with third position results, he joined the medical departments of three universities for 33 years and finally attained the position of professor but was fired in three months. He is easygoing even in tense situations.

Shibamoto Yuki as Kotozuka Nanami
She was engaged to Hanaoka Akira but died of illness two years ago. She had been raising her daughter Yotsuba as a single mother.

Takahata Atsuko as Toyama Akiyo
The MAIC’s director general. An elite bureaucrat from the Ministry of Health, Labour and Welfare. Because she never smiles, she is called “iron mask” behind her back. She is a widow and her husband’s death has a mysterious connection with Hanaoka Akira.

This blog contains information and musings on current and upcoming Japanese dramas but is not intended to be comprehensive.
View all posts by jadefrost →
This entry was posted in Spring 2016 Dramas, TV Tokyo and tagged Doctor Chousahan, Fujii Mina, Nakagoshi Noriko, Takahata Atsuko, Tanihara Shosuke. Bookmark the permalink.