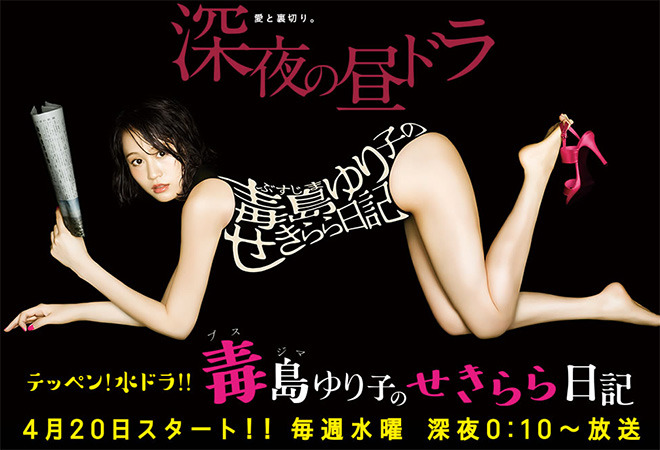 Story
Busujima Yuriko works for Akebono Shimbun’s culture and arts desk. One morning, she is told by her boyfriend to break up all of a sudden and gets depressed. But she immediately contacts her other boyfriend Haba Midori. Yuriko is a woman with a very romantic constitution and always willing to have relationships with several men. One day, she is told that she will be transferred to the political desk, which had always been her aspiration. Furthermore, she is being assigned to cover an important political figure, Kuroda Densuke, who is the secretary general of the ruling party Seishinto. It is a exceptional promotion. Yuriko reports these developments to Haba who accepts her two-timing ways. He also seems to understand the reason why she is unable to stop playing both sides. On Yuriko’s first day as a political correspondent, Kuroda has beat reporters in tow at the Diet and is bombarded with questions. It is little wonder since a rumour of him taking his underlings and leaving Seishinto is flying about. Yuriko quickly begins her role covering Kuroda, but she does not do well like the other reporters. Meanwhile, a reporter approaches Kuroda’s close aide Kamikanda Shigeru. He is Ozu Shota from a rival newspaper, Kyowa Shimbun. According to Yuriko’s senior, Natsume Harue, Ozu has scored a series of massive scoops and he is respected by other newspapers as well as politicians. Yuriko is fancies the married Ozu, but she has self-imposed rules for romance with anyone because she was let down by her father when she was a child and is not able to trust men. That is, to have two boyfriends. Even if she is cheated by either of them, the other will love her. To Yuriko, love and betrayal are inextricably linked. And she will not have an affair. However, she soon loses her head despite herself … …

Characters
Maeda Atsuko as Busujima Yuriko
A beat reporter covering the important political figure, Kuroda Densuke, at Akebono Shimbun’s political desk. She plunges into tangled romances easily because of her very romantic constitution – she falls in love easily and is hardly unfeeling. She is the type who finds it unbearable to constantly be without a boyfriend. She keeps on two-timing, thinking that if she is betrayed by this person, there is still another person. An incident during her childhood led her to distrust men and she has made “I won’t have a fling even if I two-time” her motto.

Arai Hirofumi as Ozu Shota
The ace political correspondent of Akebono Shimbun’s rival, Kyowa Shimbun. He is respected by the politicians who are his interview subjects and has score a series of scoops with after obtaining realiable information. He is an intellectual and also humorous. He is admired by fellow political correspondents.

Watanabe Daichi as Haba Midori
One of Busujima Yuriko’s boyfriends who has been cohabiting with her for four years. A struggling musician who works part-time. He is infinitely sweet and kind to Yuriko and accepts her two-timing. His dream is to become a star.

Nakamura Shizuka as Kuwahara Nanami
Busujima Yuriko’s good friend since she was an elementary school student. She is familiar with Yuriko’s family background and even understands her present inclination. She is a nymphomaniac who keeps a diary on her friends with benefits.

Yagi Masayasu as Nomura Shintaro
An instructor at the sports club that Busujima Yuriko frequents. He is a macho, hot-blooded guy, but also a literary enthusiast who passionately wins over Yuriko.

Kataoka Tsurutaro as Kuroda Densuke
The secretary general of the ruling party Seishinto. There are more than 120 lawmakers who make up a group of Kuroda’s followers. He is opposed to the measures that the Prime Minister is advancing to counter the falling birth rate and there are rumours that he is plotting to defect from Seishinto and form a new party. He hardly talks to beat reporters and new lawmakers, and only speaks to a select group of close lawmakers.

This blog contains information and musings on current and upcoming Japanese dramas but is not intended to be comprehensive.
View all posts by jadefrost →
This entry was posted in Spring 2016 Dramas, TBS/MBS and tagged Busujima Yuriko no Sekirara Nikki. Bookmark the permalink.