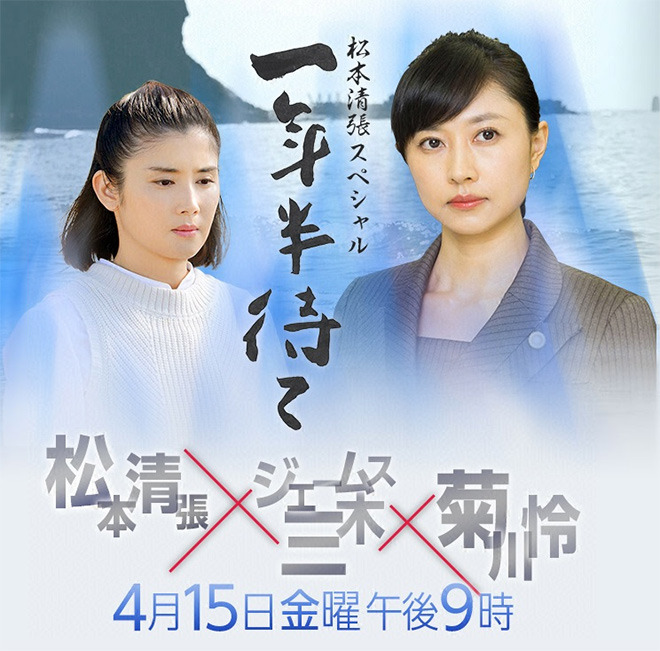 Date: From 9.00 p.m., 15 April 2016
Cast: Kikukawa Rei, Hinagata Akiko, Totsugi Shigeyuki, Maekawa Yasuyuki, Fuse Eri, Matsuawa Kazuyuki, Omiya Taro, Harumi Shiho, Shibukawa Kiyohiko, Terada Minori, Judy Ong, Ishida Hikari
Scriptwriter: James Miki (Hakuouki, Kamisama no Nyobou)
Original Work: Ichinen-han Mate by Matsumoto Seichou
Synopsis: One day, lawyer Takamori Takiko (Kikukawa Rei) gets a request from a women’s organisation to take a case. Insurance saleswoman Sumura Satoko (Ishida Hikari) has been arrested on suspicion of murdering her husband Yokichi (Shibukawa Kiyohiko), who is out of work and a horrible drunk. Yokichi got drunk on the night he died. He hit and kick her and would not stop. Satoko says she killed him in order to protect their son Takashi (Tokita Sotaro) from domestic violence. Since the perpetrator was a victim of domestic violence and the unemployed husband was financially dependent, the rights of women becomes the focus of this case. This also Takiko’s big chance to make a name for herself. “Self-defence may not be possible, but if you can get a suspended sentence on the grounds of extenuating circumstances, it’s as good as victory as a lawyer,” the head of her law firm Kurihara Hidehiko (Terada Minori) says and gives her a push. Takiko decides to take Satoko’s case. She tells Satoko firmly that she will assert that the murder was in self-defence and try to get her exonerated. But Satoko simply admits to killing her husband. She is prepared to receive punishment and only seems worried about Takashi. However, they learn a new fact. Yokichi had a mistress. She is Wakita Shizuyo (Hinagata Akiko), the proprietress of the bar ‘Mimosa’ and Satoko’s senior in high school. She is a questionable person. Then the trial begins. Asserting self-defence, Takiko seeks a not guilty verdict and clashes with the prosecutor who contends that Satoko had the intent to kill all along. The day of the ruling comes and the presiding judge says with heavy words, “I sentence the accused to three years in prison, but suspend it two years from the date of this trial.” Tears fall from Satoko’s eyes. Takiko says they can still appeal even though they have effectively won the case. In response, Satoko emphasises, “A trial should not be deliberated twice. When I think about Takashi, I can’t bear to go on with the trial any longer. I don’t want to be in the public eye any longer.” She decides not to appeal the sentence. Takiko gets overtures about running for the election of the House of Councillors and even eyes entering politics. Everyone thinks it would all end here. But one day, the phone rings in Takiko’s house. It is a phone call that tells of the start of a dreadful tragedy that no one can anticipate … …
Official Website: www.fujitv.co.jp/1nenhan

This blog contains information and musings on current and upcoming Japanese dramas but is not intended to be comprehensive.
View all posts by jadefrost →
This entry was posted in Fuji TV, Spring 2016 Drama Specials and tagged Ichinen-han Mate, Matsumoto Seichou. Bookmark the permalink.