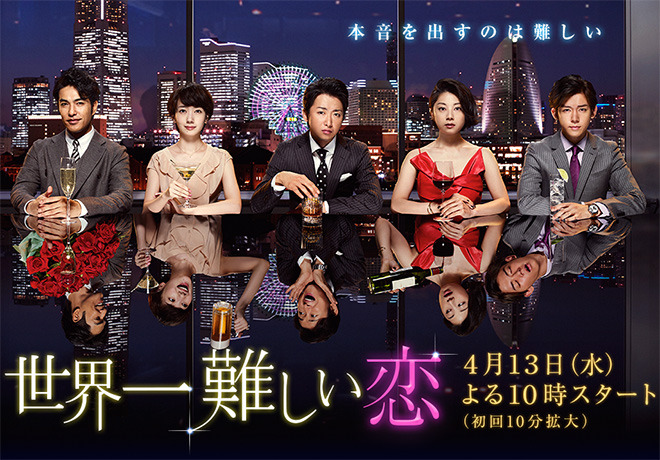 Story
34-year-old company president of Samejima Hotels, Samejima Reiji, is the very capable successor of a traditional Japanese inn. His motto is “target, speed, two months”. Even though he has expanded the business into the hotel industry with five hotels, he is feared by his employees who stay away while pretending that they respect him. He is hard to please and goes to the extent of dismissing those whose job performances fail to meet his standard or do not comply with his wishes even for the slightest thing. One day, Reiji goes to inspect a hotel in Hakone. He meets a lady who is cleaning the large public bath while he conducts his usual strict checks. She is Shibayama Misaki. Because she was hired by Samejima Hotels mid-career, she is being rotated to the hotels around the country for training. When Misaki is asked for her opinion by Reiji, she points out that milk is not sold anywhere in the hotel. She believes their guests would like to drink milk after a bath. Samejima Hotels does not have milk because Reiji hates it. Although he is bewildered by the fearless way in which Misaki expressed her opinion, he dismisses the need to have milk. Reiji has been thinking about getting married lately and has attended arranged marriage meetings. It all started with his rival Wada Hideo, the company president of Stay Gold Hotels. A showy man who always has a woman on his arm, Wada is the exact opposite of Reiji. Reiji keeps getting mocked for being single by Wada each time he meets him at a party and resolves to look for a fiancee for the next party two months later. He decides to meet Shino, the daughter of a company president. However, when he tries to ask her for her contact information without showing consideration, he is told that she does not have a handphone. Reiji’s secretary Muraoki Maiko informs him that he has been rejected by all the females he has met so far, but he does not understand why. In fact, females who get close to him quickly leave once they know his arrogant and obstinate character. Maiko indicates that he is too candid and says, “A guy who can’t tell a lie won’t be popular.” Meanwhile, Reiji sees Misaki feed the fish in the aquarium in his office. Feeding these fish is his sole right and he will not allow another person to do it. An irate Reiji tries to order her dismissal, but he has already started to fall for her. Misaki is a mysterious female who cannot read situations and Reiji does not know what she is thinking. Even so, he wants to be loved by the person he likes and pursues her with romantic tactics which are too lowly. He used to think that he is always right. But now his sense of worth starts to get shaken.

Characters
Ohno Satoshi as Samejima Reiji
The company president of the resort hotel chain, Samejima Hotels. Called the whizz kid of the hotel industry, he buys up hotels that are in financial difficulty and successfully brings them back to life with his unique methods. Although he is a genius who can satisfy guests, he does not have the slightest ability to make females happy.

Haru as Shibayama Misaki
She joined Samejima Hotels mid-career with her background working at a five-star Parisian hotel for three years. She does things at her own pace and does not get agitated about anything. She even calmly reasons with Samejima Reiji who is feared by the people around him.

Koike Eiko as Muraoki Maiko
Samejima Reiji’s capable secretary. Although she is an invincible career woman who supports him like a mother, she has totally no luck with men and has sworn men off.

Kitamura Kazuki as Wada Hideo
The company president of Stay Gold Hotels, which has been honoured as the world’s best for five consecutive years. He even has a fulfilling private life and is rival as well as a pain in the neck to Samejima Reiji.

This blog contains information and musings on current and upcoming Japanese dramas but is not intended to be comprehensive.
View all posts by jadefrost →
This entry was posted in NTV, Spring 2016 Dramas and tagged Haru, Kitamura Kazuki, Koike Eiko, Ohno Satoshi, Sekai Ichi Muzukashii Koi. Bookmark the permalink.