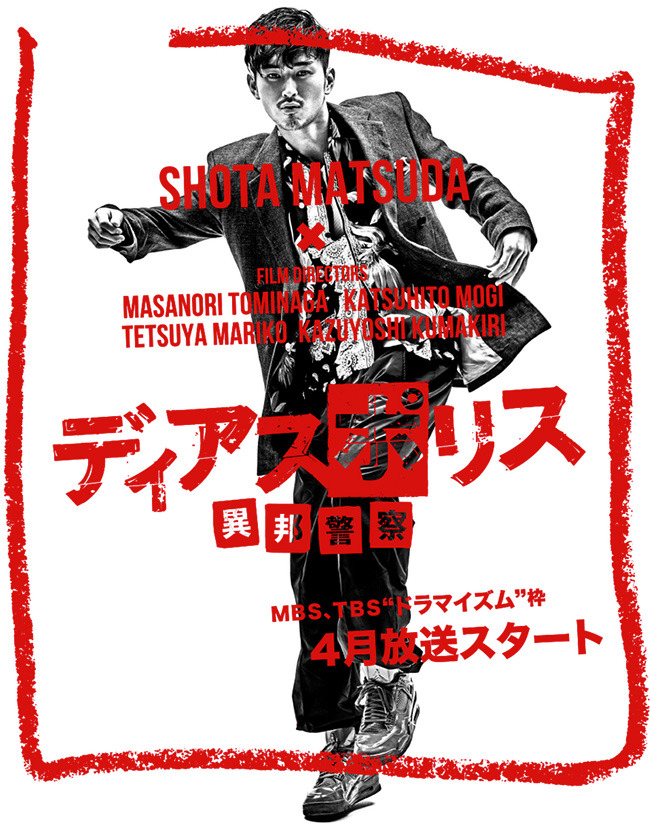 Story
There are approximately 150,000 illegal immigrants in Tokyo. A large number of them cannot qualify for refugee status and live in poverty. The illegal immigrants have created a secret organisation, the ‘Foreign Government Office’, to protect themselves. This Office has a bank that the Financial Services Agency is not involved in, a hospital that does not have the authorisation of the Ministry of Health, Labour, and Welfare and a foreign police called “Dias Police”. Kubozuka Saki is the only police officer who works for the Office. He helps the vulnerable in this autonomous society. News of the 5 million yen embezzlement case that occurred at Maruha Bank has been reported in the news on TV every day. An innocent Maruha Bank employee Suzuki Hirotaka is placed on the wanted list for the embezzlement and seeks sanctuary at the Office. This is where he meets Kubozuka who is called the police chief. Kidney robberies targeting only illegal immigrants have been occurring frequently at the Office around that time and Kubozuka is busy investigating these bizarre cases of kidney theft.

Characters
Matsuda Shota as Kubozuka Saki
A police officer of the Dias Police which protects the safety of the people who live in the secret, autonomous organisation, the Foreign Government Office, because they smuggled themselves into Tokyo illegally. He serves as the police chief and is familiar to the people around him as “chief”. He is a mysterious guy of unidentified nationality who is fluent in the languages of all the countries in the world.

Hamano Kenta as Suzuki Hirotaka
A former bank employee who becomes a material witness in a 5 million yen embezzlement case. Although he asserts that he has been unjustly accused, he is pursued by the police as an investigation subject. Because he provided a loan to the Foreign Government Office’s governor Kotetsu when he was a bank employee, he finds his way to the Office and is hired as its accountant, but he is made to fix his face and work as Kubozuka Saki’s subordinate.

Yanagisawa Shingo as Ah
The Foreign Government Office’s number two “assistant”. At once time, he resisted the oppressive rule of the government in his homeland and killed five police officers. He abandoned both his family and hometown and smuggled himself into Japan. He runs a pest control company called Ah-san’s Shop.

Kou Yoshio as Kotetsu
He was forced to leave his native land as a political criminal decades ago and is the Foreign Government Office’s second governor now. He also runs a company on his own and has a weakness for money and women.

Marie as Isamu
She is usually by Kotetsu’s side as his bodyguard and secretary. She wields a sword called ‘shotal’, and also helps Kubozuka Saki in his work, like a ninja.

This blog contains information and musings on current and upcoming Japanese dramas but is not intended to be comprehensive.
View all posts by jadefrost →
This entry was posted in Spring 2016 Dramas, TBS/MBS and tagged Dias Police, Hamano Kenta, Matsuda Shota. Bookmark the permalink.