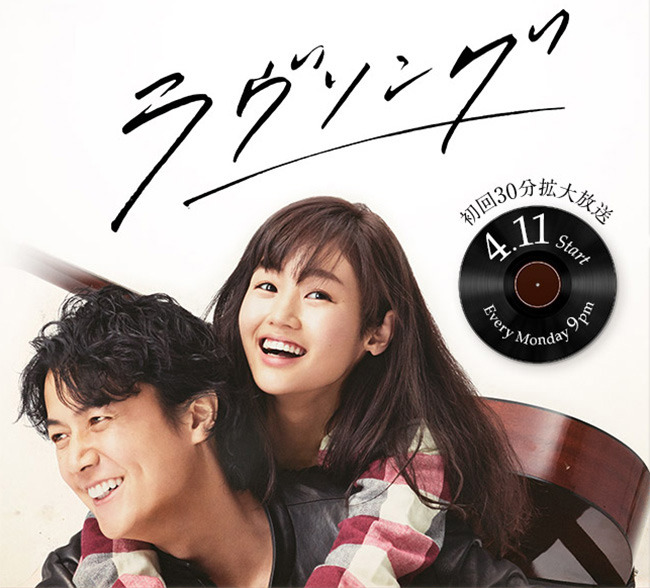 Story
Kamishiro Kohei was a professional musician 20 years ago. He only had one hit song and remained in obscurity until his contract was terminated by the record company and he left the music industry. Now at the age of 44, Kamishiro is still a bachelor. He has no permanent residence and uses his looks to move from one woman’s home to the next. On this day too, he breaks up with a woman who feels that it is about time, and leaves carrying his little belongings and guitar case. Sano Sakura works as maintenance support at the maintenance shop of Big Mobil, a large car dealership. Although she is friendly, she is always reminded by her boss Takigawa Fumio to give proper responses. Sakura also does not talk much with her colleagues. After warning Sakura, Takigawa greets Kamishiro. Kamishiro serves as the company’s corporate counsellor twice a week. Although time has passed, he has not been able to completely cut off his passion for music and leads a life of drudgery. After work, Kamishiro heads over to the live music bar ‘S’ where the owner Sasa Yuji immediately recognises that he has broken up with a woman. Kamishiro requests for lodgings for the time being, but is rejected. It is difficult for Kamishiro to ask his old friends who have all settled down. Sasa suggests that it is better if he asks Shishido Natsuki again, but Kamishiro feels awkward about it and searches for a manga cafe to spend the night. However, none of them are comfortable so he has no choice but to stay overnight at Natsuki’s home. One day, Sakura makes a mistake at work. Worried about Sakura’s poor communication with her work colleagues, Takigawa gets her to see Kamishiro. Kamishiro meets a lonely Sakura who has an inferiority complex and treats her kindly. Although she is poor at communicating with people, she has been given a beautiful singing voice that is a gift from god. Kamishiro feels the desire to put himself to the test once more and be recognised because of his encounter with her. As they gradually start to connect through music, his monotonous life begins to change little by little. And then their love song begins to play … …

Characters
Fukuyama Masaharu as Kamishiro Kohei
A former professional musician who could not produce hits after only one hit song. Feeling overwhelmed by the limits of his own talent, he now keeps a distance from music. Although he works as a corporate counsellor, he has not been able to completely cut off his passion for music. Even in his private life, he cannot let down his guard with other people because he was affected by a past love and just lives a wearisome life. Through his encounter with Sano Sakura who has a gifted singing voice, he regains his passion for music and starts to get back the life he lost.

Fujiwara Sakura as Sano Sakura
She grew up in an orphanage in Hiroshima and has lived with loneliness. Even though she now works at the maintenance department of a large car repair and dealership, she is not at communicating with people. Because of that, she cannot fit in with her workplace colleagues and is sick of her own life. One day, she has to go to the inhouse corporate counsellor due to an incident that happened the company. She meets Kamishiro Kohei and she learns to express herself through songs. This encounter with him gives her hope to live and she starts to open her heart to him little by little. These feelings gradually change to become love.

Suda Masaki as Amano Kuichi
Sano Sakura’s childhood friend since their orphanage days. He cannot trust people because he was abandoned after being abused by his parents. He has a strong instinct for self-preservation and can look rougher than necessary in order to protect himself. But deep down, he is a kind guy with a pure heart. When he talks face to face, he would always end up saying spiteful things, but he has liked Sakura since they were children.

Kaho as Nakamura Mami
She is like an older sister to Sano Saura since their days in a Hiroshima orphanage. She came up to Tokyo two years before Sakura and is now working at a hostess bar. Although she has been living with Sakura as a surrogate big sister, she hopes Sakura will be independent when she gets married.

Suruga Taro as Nomura Kenta
A salesman who works for Big Mobil, a second-hand car repair and dealership. Nakamura Mami’s fiance and the person who recommended Sano Sakura her job.

Tanaka Tetsushi as Masumura Taizo
He was the bassist in the band with Kamishiro Kohei during university days, and now works for the ENT department of a general hospital.

Uzaki Ryudo as Sasa Yuji
He runs the live music bar ‘S’. Kamishiro Kohei and his band used to play at the bar frequently. He is still their confidant and is like an older brother.

Mizuno Miki as Shishido Natsuki
A former band member. Together with Sasa Yuji, She has been supporting Kamishiro Kohei from behind the scenes and is secretly in love with him. Even after the band disbanded, she has found various reasons to get close to Kamishiro. But they have not moved beyond friendship and their relationship is such that they can discuss each other’s romances now. She faintly hopes that their relationship will change someday as she stays by his side.

This blog contains information and musings on current and upcoming Japanese dramas but is not intended to be comprehensive.
View all posts by jadefrost →
This entry was posted in Fuji TV, Spring 2016 Dramas and tagged Fukuyama Masaharu, Kaho, Love Song, Mizuno Miki, Suda Masaki, Tanaka Tetsushi. Bookmark the permalink.