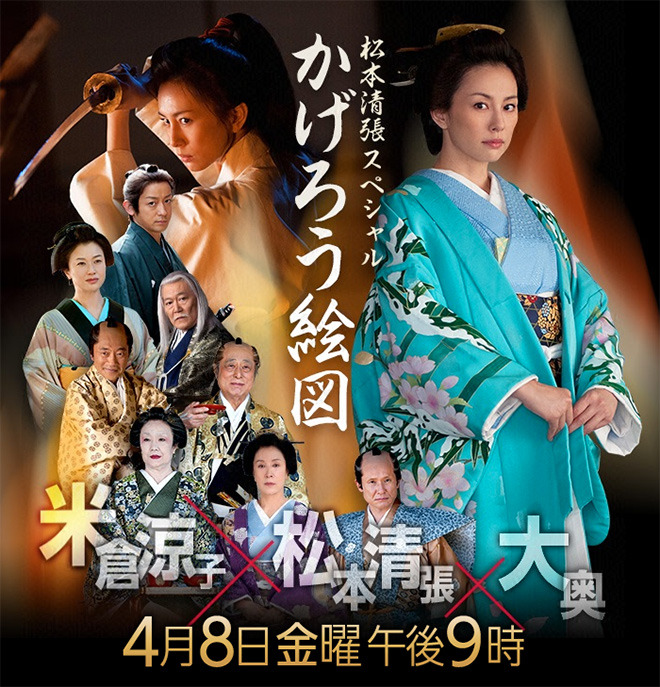 Date: From 9.00 p.m., 8 April 2016
Original Work: Kagerou-ezu by Matsumoto Seichou
Scriptwriter: Asano Taeko (Dakara Kouya, Utsushiki Wana, Ten no Hakobune)
Cast: Yonekura Ryoko, Yamamoto Koji, Natsukawa Yui, Takahata Atsuko, Nakamura Yuko, Tominaga Saori, Takatsuki Sara, Kato Atsuki, Ishibashi Tamotsu, Kaneko Noboru, Tsugawa Masahiko, Shiraishi Kayoko, Kimura Yuichi, Ukaji Takashi, Nishida Ken, Kinoshita Houka, Takenaka Naoto, Kunimura Jun
Synopsis: Nui (Yonekura Ryoko) is at a loss after her adoptive father Shimada Mataemon’s sudden death. Her own father met an untimely death when he was about to expose the shogunate’s corruption. Mataemon’s son Shimada Shinnosuke (Yamamoto Koji) decides to cast away his sword to learn medicine. The two of them are sent off by their guardian Wakisaka Yasutada (Takenaka Naoto), a shogunate administrator for shrines and temples. Five years after they went their separate ways, the eleventh shogun Tokugawa Ienari (Tsugawa Masahiko) is in his final years. Even though Ienari has handed the position of shogun to Ieyoshi (Ishibashi Tamotsu), he still wields the real power. To continue enjoying wealth and power even after he passes away, Ienari’s concubine Omiyo no Kata (Nakamura Yuko), who has been in his favour for a long time despite his legal wife Tadako (Shiraishi Kayoko), desires to have her own grandson Maeda Inuchiyo installed as the next shogun. Making use of his right-hand man Mizuno Minonokami (Kinoshita Houka) and others, Omiyo no Kata’s backer Nakano Sekio (Kunimura Jun) wheels and deals for the purpose of making Ienari write the directive that will determine the next shogun. On the other hand, Wakisaka is trying to clean up the corrupted shogunate and inner palace. He sends Nui into the inner palace in order to find out its actual state. The strategy succeeds. Nui, who calls herself Tomi, endears herself to Omiyo no Kata and rises in rank of room attendant for the lady-in-waiting Kikukawa (Tominaga Saori). Before long, Nui identifies liaisons between the monks of Kannouji and Sajima (Takahata Atsuko) and other ladies in waiting. She is determined to expose the collusion between Kannouji, where Omiyo’s biological father is the head monk, and the unforgivable relationships between the ladies in waiting of the inner palace and the monks. Nui is undertaking this undercover investigation without regard for the danger she is putting herself in, for the sake of Shinnosuke whom she secretly loves. After political power is set right, she wants him to become a samurai again. Shinnosuke is now a back-alley doctor and is staying with a female called Toyoharu (Natsukawa Yui), who is a master of a style of Japanese jōruri music and the shamisen. One day, Kikukawa’s drowned body is found in the castle town. In truth, Kikukawa is Toyoharu’s younger sister. Certain that this case is connected with the corruption in the inner palace, Toyoharu sneaks into Nakano Sekio’s residence to search for the truth. Meanwhile, Ienari collapses from a stroke. Nakano takes advantage while Ienari is weak and finally succeeds in obtaining his written directive that the next shogun will be Maeda Inuchiyo. Will the battle for succession be settled with this? And what about the outcome of the love between Nui, Shinnosuke and Toyoharu?
Official Website: www.fujitv.co.jp/kagero-ezu

This blog contains information and musings on current and upcoming Japanese dramas but is not intended to be comprehensive.
View all posts by jadefrost →
This entry was posted in Fuji TV, Spring 2016 Drama Specials and tagged Asano Taeko, Kunimura Jun, Matsumoto Seichou, Natsukawa Yui, Takahata Atsuko, Yamamoto Koji, Yonekura Ryoko. Bookmark the permalink.