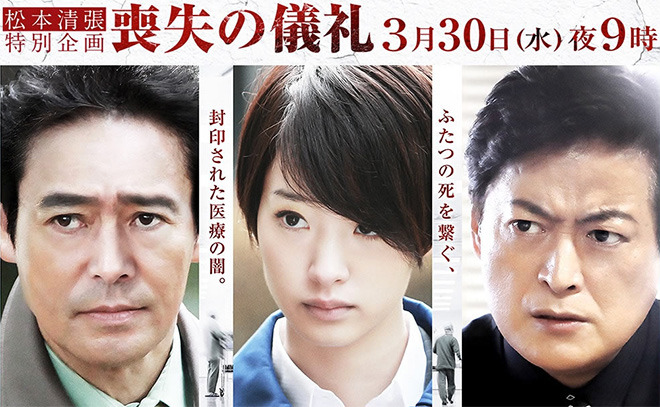 Date: From 9.00 p.m., 30 March 2016
Original Work: Soushitsu no Girei by Matsumoto Seichou
Scriptwriter: Fukasawa Masaki (Misuterina Futari, ST Aka to Shiro no Sousa File, Nobunaga Chef Series)
Cast: Murakami Hiroaki, Goriki Ayame, Ishiguro Ken, Jinnai Takanori, Yoshiyuki Kazuko, Terada Minori, Hasegawa Tomoharu, Fueki Yuko, Nomura Hironobu, Takasugi Ko, Kurosawa Asuka, Kaneko Noboru, Haruta Junichi
Synopsis: Koike Kunihiko (Ishiguro Ken) and his subordinate Okamura Takaaki (Tsujimoto Yuki) from Koei Medical make a presentation on the latest medical devices at a medical seminar in Numazu City, Shizuoka Prefecture. At a social gathering, they speak with a surgeon Sumida Tomoyoshi (Nomura Hironobu) who attended the seminar. Shortly after that, Sumida leaves to return to Tokyo for urgent business. However, the next day, he is found dead at a hot spring inn in Naka Izu. Otsuka Kyosuke (Murakami Hiroaki) of the Shizuoka Prefectural Police’s First Investigative Division arrives at the scene. He is an eccentric character who loses sight of the things around him if there is something that is on his mind, and rookie detective Tamura Misaki (Goriki Ayame) is one person who gets pushed around by him. Otsuka sees Sumida’s dead body in the bath and notices a wound less than 1 cm on his left wrist. He immediately recognises the brutal method of murder by cutting the radial artery and asserts that Sumida slowly bled to death. Otsuka also discovers a written threat “I know your secret” by someone called Aoyagi Jinji from Sumida’s personal belongings. He heads to Tokyo with Misaki to investigate the matter further. A murder takes place at Jindaiji’s park in Tokyo at that moment. Detective Suda Kohei (Jinnai Takanori) of the Tokyo Metropolitan Police Department’s First Investigation Division rushes to the crime scene. He is also another eccentric detective. But the moment he sees the scene, he deduces the cruel method of murder in a split second. Furthermore, the victim is Kohara Junjiro (Takasugi Ko), the director of Kohara Hospital, who attended the Shizuoka medical seminar with Sumida. 10 years ago, Otsuka and Suda were partners in a case involving a criminal who fled Tokyo for Shizuoka but they were taken off the investigation. Figuring out a connection between the two brutal murders, Otsuka and Suda exchange information as they pursue the cases. A female called Hagiwara Kazue emerges while Otsuka proceeds to investigate a clue that Sumida’s interest is haiku. At the same time, Suda searches for the true identity of Aoyagi Jinji. As the two of them join the dots, the truth of the devastating collusion between doctors and medical device manufacturers as well as unexpected love-hate relationship troubles are revealed.
Official Website: www.tv-tokyo.co.jp/seicho_girei

This blog contains information and musings on current and upcoming Japanese dramas but is not intended to be comprehensive.
View all posts by jadefrost →
This entry was posted in TV Tokyo, Winter 2016 Drama Specials and tagged Goriki Ayame, Ishiguro Ken, Matsumoto Seichou, Soushitsu no Girei. Bookmark the permalink.