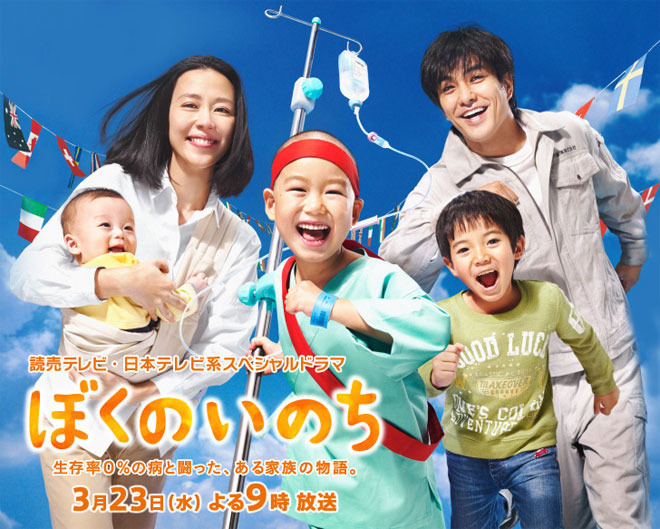 Date: From 9.00 p.m., 23 March 2016
Scriptwriter: Yoshida Noriko (Manmakoto, Henshin, Gekiryuu)
Cast: Kimura Yoshino, Kitamura Kazuki, Yokoyama Ayumu, Kinami Haruka, Kitagawa Hiromi, Oyama Rento, Ryu Raita (guest star), Masu Takeshi, Ibuki Goro, Takahata Atsuko, Sasaki Kuranosuke
Synopsis: Kawada Michiyo (Kimura Yoshino) lives happily with her husband Daisuke (Kitamura Kazuki) and their three sons. But one day, their lively 4-year-old second son Yuhei (Yokoyama Ayumu) who loves sports, catches a cold and is brought to the hospital when his fever does not subside. Yuhei is diagnosed with a cancer called hepatoblastoma. It is a cancer that occurs in 1 out of a million people. Michiyo decides to call it a “worm” after discussing with Daisuke and encourages their son to be hospitalised so that he can beat the “worms” in his stomach. Yuhei bravely tolerates chemotherapy treatment, which is tough even for adults, and only has smiles for the family. However, Michiyo is told that Yuhei has no chance of surviving two years. She refuses to give up no matter what happens.
Official Website: www.ytv.co.jp/bokunoinochi

This blog contains information and musings on current and upcoming Japanese dramas but is not intended to be comprehensive.
View all posts by jadefrost →
This entry was posted in NTV, Winter 2016 Drama Specials and tagged Boku no Inochi, Kimura Yoshino, Kitamura Kazuki, Sasaki Kuranosuke, Takahata Atsuko. Bookmark the permalink.