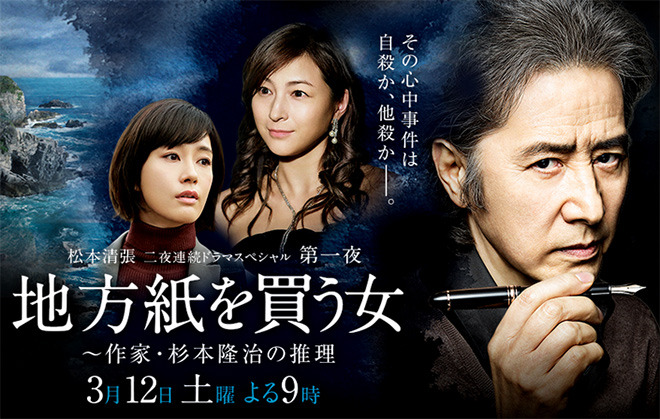 Date: From 9.00 p.m., 12 March 2016
Original Work: Chihoshi o Kau Onna by Matsumoto Seichou
Scriptwriter: Takeyama Yo (Kokuhatsu, Yakou no Kaidan)
Cast: Tamura Masakazu, Hirosue Ryoko, Mizukawa Asami, Kitamura Yukiya, Katase Nana, Suruga Taro, Watanabe Mayu, Kinoshita Houka, Sudo Risa, Yui Ryoko, Nishida Naomi, Sasaki Sumie, Sano Shiro, Terajima Susumu, Osugi Ren, Hashizume Isao
Synopsis: It is decided that novelist Sugimoto Ryuji (Tamura Masakazu) will serialise a novel for the local newspaper Kanazawa Hibi Shimbun, and he moves from Tokyo to Kanazawa in Ishikawa Prefecture. Gambling his writing career on this novel, he devotes full attention to writing “Distant Memory” and it gains popularity when published. Sugimoto is asked by Hattori Saburo (Sano Shiro), who heads the newspaper’s cultural department, to extend his writing. On this occasion, he is told that the newspaper has received a letter from Shiota Yoshiko (Hirosue Ryoko), a woman who lives in Tokyo. She desires a subscription because she wants to read “Distant Memory”. Sugimoto has slight doubts about Yoshiko and wonders where she read his novel and why she wants to read it halfway through. But his assistant Tasaka Fujiko (Mizukawa Asami) speculates that Hattori forged the letter because he does not want Sugimoto to lose his will to write after failing to win a literary prize. Unable to sit still, Fujiko goes to Tokyo alone. She feels assured for the moment when she confirms Yoshiko’s existence. However, Fujiko perceives some ulterior motive behind Yoshiko’s lie about her identity and cannot dispel her suspicions. Several days later, the newspaper gets a letter from Yoshiko who refuses a subscription because “Distant Memory” has become boring. The novel ought to have been interesting lately. Sugimoto feels sure of himself and a fellow novelist Higashiyama Zenkichi (Hashizume Isao) acknowledges this too. So Sugimoto reaches a decision on Yoshiko’s course of action. She did not subscribe to the newspaper because she wanted to read his novel. If that is the case, what was her purpose for subscribing to Kanazawa Hibi Shimbun? Sugimoto and Fujiko re-read the newspapers with the dates that Yoshiko had wanted to subscribe and find an article about a double suicide connecting Tokyo and Hokuriku. The dead bodies of a Tokyo department store security guard Shoda Sakuji (Suruga Taro) and his lover, department store employee Fukuda Umeko (Sudo Risa), were discovered at Sekinohana. It is this double suicide case that Yoshiko must have wanted to read. Convinced about that, Sugimoto visits Yoshiko who works at an exclusive Ginza club. Learning that Sugimoto is the author of “Distant Memory”, Yoshiko apologises. Her husband Shiota Hayao (Kitamura Yukiya) has lived away from home in Hakui City in Ishikawa Prefecture because he is the secretary of a Diet member. She had been busy caring for her late mother-in-law as a housewife in Tokyo. Now he has resigned and is returning to Tokyo for the first time in 15 years to live together. Sugimoto comments that she must be happy, but Yoshiko shows mixed feelings for some reason. Although they talk casually, Sugimoto quietly leaves a photograph when he walks out of the club. Something in the photograph shocks Yoshiko. Wanting to know the truth, Sugimoto starts to investigate the double suicide and Shiota’s surroundings together with Fujiko when he returns to Kanazawa. Were the deaths of Shoda and Umeko truly suicides? If they were murdered, how is Yoshiko connected?
Official Website: www.tv-asahi.co.jp/chihoshi