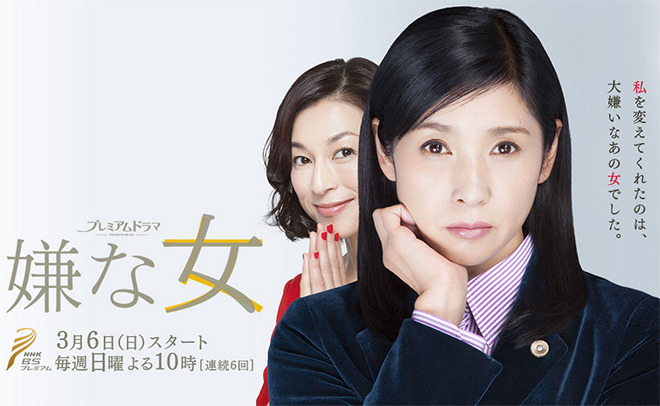 Story
At 37, Ishida Tetsuko is a late bloomer as a lawyer. She works together with Sakaguchi Hiroyuki and Isozaki Ken at Ogiwara Michiya’s law firm. One day, Tetsuko receives a phone call. The caller is Kotani Natsuko, a distant relative of the same age. Natsuko asks Tetsuko to fix her troubles with a former fiance Nishioka Akio. When Tetsuko investigates Natsuko whom she has not met since childhood, it becomes increasingly clear that Natsuko is an exceptionally self-centred swindler who lives to wrap men around her finger. On the other hand, Tetsuko earnestly lives to help people. The two ladies are like opposite sides of the same coin. Tetsuko unwittingly finds herself acting as Natsuko’s representative. Natsuko keeps getting into trouble because her tricks are always half measures and Tetsuko’s role is to clean up the mess. Their troubled relationship has endured for 20 years and they eventually start to become essential comrades to each other. While serving as a go between for Natsuko, who is outrageous yet somehow impossible to hate, and her “victims”, Tetsuko realises there are things more important than money and winning trials. Although life has not gone as planned, she could have done worse and there is value in embracing life every day.

Characters
Kuroki Hitomi as Ishida Tetsuko
A rookie lawyer at Ogiwara Michiya’s law firm. She abandoned her career at a large bank and became a lawyer at the age of 37. A troubled relationship with her distant relative, the troublemaker Kotani Natsuko, has endured for 20 years from the time she settled Natsuko’s request. She matures as a lawyer and as a person through the settlement of Natsuko’s case.

Suzuki Honami as Kotani Natsuko
Ishida Tetsuko’s distant relative. A natural-born swindler who lives to captivate men. She is the same age as Tetsuko. Although she gives the men she has deceived momentary happiness, she always slacks off at the final stage trouble and asks Tetsuko to resolve matters. She does not stop at one person but flits from man to man like a butterfly.

Katsumura Masanobu as Sakaguchi Hiroyuki
A lawyer at Ogiwara Michiya’s law firm and Ishida Tetsuko’s senior even though they are the same age. He soon strikes out on his own and sets up his own legal business specialising in corporate law. Although he has romantic feelings for Tetsuko, neither is able to take a bold step forward and their relationship remains at a cautious distance.

Tsukamoto Takashi as Isozaki Ken
He handles office work at Ogiwara Michiya’s law firm as he studies for the bar exam. A passionate guy who firmly believes that the role of a lawyer is to save the world. He follows Ishida Tetsuko to solve Kotani Natsukos’s troubles. He feels a deep anger towards Natsuko, but becomes her fan before long.

Furuya Ikkou as Ogiwara Michiya
A lawyer and the boss of the law firm, Ogiwara. He possesses individualistic defence methods backed by years of experience. His motto is “persistently listen to the stories from all related parties”. He gently admonishes Ishida Tetsuko who forms hasty conclusions and and guides her.

This blog contains information and musings on current and upcoming Japanese dramas but is not intended to be comprehensive.
View all posts by jadefrost →
This entry was posted in NHK, Winter 2016 Dramas and tagged Iyana Onna, Katsumura Masanobu, Kuroki Hitomi, Suzuki Honami. Bookmark the permalink.