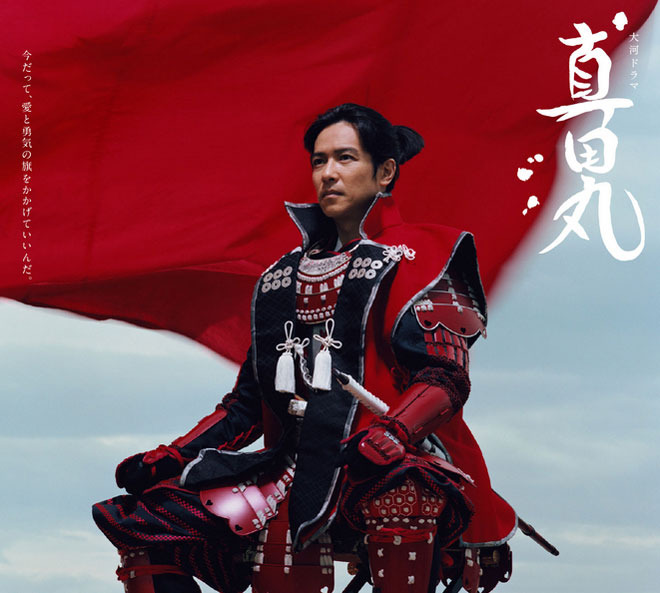 Story
Sanada Nobushige, known in history as Yukimura, was born to Sanada Masayuki, a nominal lord of Shinshu (present day Nagano Prefecture) who serves the Takeda clan. The Sanadas were at the mercy of the turbulent wars which the surrounding feudal lords waged. In February 1582 (Tensho 10), nine years after the sudden death of the great warlord Takeda Shingen, the Takeda clan of Kai Province faces a grave crisis under the leadership of Takeda Katsuyori, the current head of the family. Their territory is invaded by Oda Nobunaga’s large army following a betrayal by a senior vassal and castles fall one after another. Masayuki counsels that they counterattack Oda at his own castle, Iwabitsu Castle in Kozuke Province and he sets off a step ahead of them to make preparations. Masayuki’s elder son Nobuyuki and Nobushige are left behind. Katsuyori visits the brothers in secret and tells them that he will not be going to Iwabitsu. They decide to part company with the main forces of the Takeda clan, which is retreating to Iwadono Castle in Kai Province, and head to Iwabitsu where their father is waiting. During their journey, they receive news that Katsuyori was betrayed. Now that they have lost their master, the Sanada clan has to decide whether to side with the Hojo or Uesugi. Masayuki chooses to surrender to their sworn enemy, Nobunaga. However, Nobunaga soon dies in the Honnoji Incident and the Sanada clan loses its master once again. This time, Masayuki seeks the support of Uesugi Kagekatsu. He sends Yukimura to live as a hostage of Kagekatsu and later on, Toyotomi Hideyoshi. However, Yukimura, who accurately reads both the period and its people, would try hard to survive the Sengoku era with his family through wisdom, courage and great effort. He is confined on Mt Koya for taking the side of the Western forces in the Battle of Sekigahara. During the Siege of Osaka, Yukimura builds a fortification called Sanada-maru and bravely fighys the much larger invading forces of Tokugawa Ieyasu in a display of his outstanding leadership. He dies in battle in the summer siege.

Characters
Sakai Masato as Sanada Nobushige (Yukimura)
A military commander representative of the Sengoku Period, he is extolled as the “greatest warrior in the land”. He spent his youth as a hostage of Toyotomi Hideyoshi and saw the ups and downs of the Toyotomi clan with his own eyes. He takes the side of the Western forces in the Battle of Sekigahara and is confined on Mt Koya. In the Siege of Osaka, he builds a fortification called Sanada-maru and fights hard to protect Yodo and Toyotomi Hideyori.

Oizumi Yo Sanada Nobuyuki
Sanada Nobushige’s elder brother. Although they are polar opposites in character, they have deep trust in each other. He takes the side of the Eastern forces in the Battle of Sekigahara and they split ways. He becomes the first lord of the domain of Shinshu Matsushiro.

Kusakari Masao as Sanada Masayuki
The great father of Sanada Nobushige and Nobuyuki. He excels in diplomacy and military arts. A genius warlord whom Toyotomi Hideyoshi says is not to be trusted because he is two-faced.

Kurihara Hideo as Sanada Nobutada
Sanada Masayuki’s trusted younger brother. He moves from the Hojo clan to the Uesugi clan, and supports his brother’s stratagem.

Kimura Yoshino as Matsu
Sanada Nobushige’s elder sister whom he admired all his life. A puppet of fate, she is held hostage by Oda Nobunaga.

Endo Kenichi as Uesugi Kagekatsu
A warlord of the Sengoku Period who is connected to Sanada Nobushige through a strange fate. Nobushige became his hostage in his youth. At the Battle of Sekigahara, they fought against Tokugawa forces but in the Siege of Osaka, he surrounds Nobushige’s Osaka Castle.

Yoshida Kotaro as Oda Nobunaga
A man who rises to greatness in the turbulent Sengoku Period and unifies most of the country. He dies in the Honnoji Incident just three months after destroying his last powerful enemy, the Takeda clan.

Kohinata Fumiyo as Toyotomi Hideyoshi
His appreciation of the might of the Sanada clan of Shinshu Province leads him to promote the head of the family to the rank of feudal lord. He destroys the Hojo clan in a battle over the Sanada clan’s territories, and unites the country.

Nakagawa Taishi as Toyotomi Hideyori
Toyotomi Hideyoshi’s heir. After Hideyoshi’s death, he is raised and doted on by his mother Chacha during the time that the Toyotomi clan is in decline. He fights with Sanada Nobushige in the Siege of Osaka, the final decisive battle with the Tokugawa forces.

Uchino Masaaki as Tokugawa Ieyasu
Sanada Nobushige’s lifelong foe and strongest enemy. He drives Nobushige into a corner during the Siege of Osaka, the final battle for the rule of the country, in order to conquer the whole country.

Yamamoto Koji as Ishida Mitsunari
A senior vassal who vows absolute loyalty to the Toyotomi clan. His role as an agent for Toyotomi Hideyoshi has significant meaning to the Sanadas. He invites Sanada Nobushige and Masayuki to join the Western forces in the Battle of Sekigahara.

Hayashi Kunishiro as Takeda Shingen
A warlord of the Sengoku Period. He expanded his territory through outstanding military strategy and leadership. The calvary he led was feared as the strongest in the country.

Hira Takehiro as Takeda Katsuyori
Takeda Shingen’s son. The last lord of the Takeda clan whom the Sanadas serve. A tragic figure who tries to surpass his great father.

Takashima Masanobu as Hojo Ujimasa
A warlord of the Sengoku Period. He waged a fierce battle with the Sanada clan over hegemony of Kanto. The fight for territory triggers the Siege of Odawara by Toyotomi Hideyoshi and results in the demise of the Hojo clan.

Nagasawa Masami as Kiri
Sanada Nobushige’s lifetime partner. The daughter of Takanashi Naiki, a senior vassal of the Sanada clan. She stands by Nobushige in his turbulent life, from youth until the Siege of Osaka.

Kuroki Haru as Ume
Sanada Nobushige’s first love. The daughter of Hotta Sakube, a local warrior in Sanada’s hometown. She gives birth to his first child.

Suzuki Kyoka as Kita no Mandokoro
Toyotomi Hideyoshi’s legal wife. He trusts her completely. She commands respect from Hideyoshi himself and his vassals as the godmother of the clan.

Takeuchi Yuko as Chacha (Yodo)
Toyotomi Hideyoshi’s beloved concubine. She has tremendous influence because she bore his long-awaited heir Hideyori. She forms a strong bond with Sanada Nobushige who is Hideyoshi’s favourite.

Saito Yuki as Acha no Tsubone
Tokugawa Ieyasu’s beloved concubine. She raised the second shogun Hidetada in place of his mother. At the Siege of Osaka, she risked her life to negotiate peace.