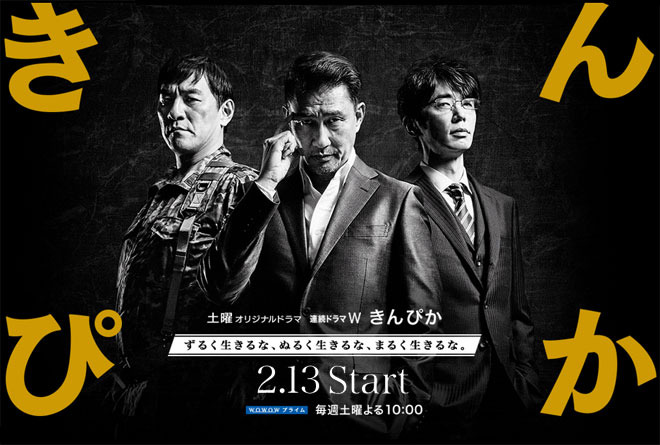 Story
Old-fashioned gangster Sakaguchi Kenta, a member of Tensu Rengokai’s Iwamatsu-gumi, shot the antagonistic head of Ginshukai dead. He acted alone in the interest of his organisation. After serving a 13-year sentence, he is released from prison. But the only person who greets him is the old detective Mukai Gonzaemon unlike the large number of members he had imagined. Mukai hits him with reality, “Don’t be silly. You were just a sacrificial pawn. Meanwhile, Self Defence official Okochi Isao demands the repeal of security-related laws and launches a “solo coup d’état”. However, the coup fails. Around the same time, Hirohashi Hidehiko, the outstanding secretary of politician Yamauchi Ryuzo, takes the rap for Yamauchi’s bribery charges. He is arrested and his marriage is in danger of breaking down. The two of them, who have been pushed to the edge, are summoned by Mukai. Kenta, Okochi and Hirohashi get together. They were betrayed by their respective organisations because they stuck to their “principles” rather than money and career advancement. Mukai urges them, “Now we have three scoundrels with courage, skill and brains. Stop putting up with unreasonable things. Try doing what you like.” And so, they attack at a furious speed.

Characters
Nakai Kiichi as Sakaguchi Kenta
He belongs to Tensu Rengokai’s Iwamatsu-gumi and his nickname is Pistol Kenta. He is released from prison after serving a 13-year sentence, but he has been forsaken by his organisation. He is an old-fashioned man with a heart.

Santamaria Yusuke as Hirohashi Hidehiko
Yamauchi Ryuzo’s former secretary. A Finance Ministry career bureaucrat turned politician’s secretary. However, he becomes Yamauchi’s scapegoat and is arrested for bribery. He loses both his position and family.

Pierre Taki as Okochi Isao
A former Self Defence official. He demands the repeal of security-related laws and launches a “solo coup d’état”. However, the coup fails. His tough appearance belies the fact that he is a pacifist.

Aoyagi Sho as Fukushima Katsuya
A young leading subordinate of the Iwamatsu-gumi. He is like a younger brother to Sakaguchi Kenta and even respects him to this day. He is the cash cow of Iwamatsu Holdings.

Yamamoto Ryuji as Iwamatsu Enji
The boss of the Iwamatsu-gumi. He aims to be the next head of Tensu Rengokai and considers Sakaguchi Kenta, who has been released from prison, a nuisance.

Shinagawa Toru as Niimi Gentaro
The head of Tensu Rengokai. He has been hospitalised and the problem of succession weighs on his mind.

Miura Masaki as Kusakabe Akio
A journalist who has been following Hirohashi Hidehiko’s life since he was a bureaucrat.

Murai Kunio as Yamauchi Ryuzo
An important member of the Diet and a shrewd politician who is regarded the next Prime Minister. On the other hand, there are also dark rumours about him and Tensu Rengokai.

Iwamatsu Ryo as Tanokura Goromatsu
A leading subordinate of Tensu Rengokai. Sakaguchi Kenta, Iwamatsu Enji and him are like brothers. He is lying in wait to be the next head of the Tensu Rengokai and strikes a deal with Yamauchi Ryuzo.

Iijima Naoko as Abe Maria
The chief nurse who fearlessly squares off against the head of Tensu Rengokai. She meets Sakaguchi Kenta and falls in love with him.

Watabiki Katsuhiko as Mukai Gonzaemon
An old detective. He summons Sakaguchi Kenta, Okochi Isao and Hirohashi Hidehiko who feel outrage at their lives, and puts them up at his Ginza stronghold.

Kamio Yu as Sakuma Chuuichi
A detective and career police officer. There are rumours that he has connections with the underworld but … …

This blog contains information and musings on current and upcoming Japanese dramas but is not intended to be comprehensive.
View all posts by jadefrost →
This entry was posted in Winter 2016 Dramas, WOWOW and tagged Kinpika, Nakai Kiichi, Santamaria Yusuke. Bookmark the permalink.