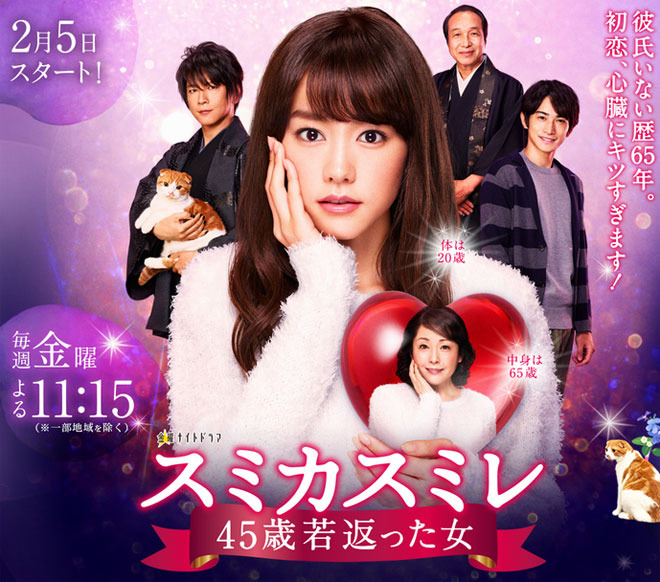 Story
Kisaragi Sumi is a 20-year-old university student. But do not be surprised that she is a 65-year-old inside. Under pressure to help out with the family business from a young age, she could not have a youth. Even afterwards, she devoted her entire life to taking care of first her grandmother and then her parents. Sumi finds herself turning 65 without ever experiencing romance and university life. She takes a little pride in having lived with integrity. Then her mother passes away after many years of nursing her and Sumi, who is all alone in this world, goes to the storage room to search for the portrait. Her finger gets caught in an old folding screen painted with a black cat and rabbitear iris, and she stains the screen with her blood. However, the blood is somehow soaked up instantly without leaving a trace. Sumi marvels at this but turns her attention to photo albums behind the folding screen. She feels regret as she recalls the past. At that moment, a mysterious man suddenly appears. He is Rei, the black cat that stepped out from the screen and changed into human form. It seems that Sumi’s blood has released a “seal” which confined Rei in the folding screen … … Sumi is taken aback and shaken. When Rei asks for her wish, Sumi replies, “I want to live life over again”. Something even more unbelievable happens. Sumi wakes up and discovers that she has the appearance of a 20-year-old because of Rei’s magic! Rei says he will call her his mistress and wait on her after today. Sumi calls herself Kisaragi Sumire and attends the university of her dreams. Despite being bewildered by her appearance and new life and feeling an anxiety similar to panic at times, she tries to give youth another try. Then Sumire meets a familiar male student on campus. He is Mashiro Yusei who was kind to her 65-year-old self on the bus … …

Characters
Kiritani Mirei as Kisaragi Sumire / Matsuzaka Keiko as Kisaragi Sumi
65-year-old Kisaragi Sumi becomes the youthful 20-year-old Kisaragi Sumire, and lives university life as Sumire. From the time she was a child, she gave priority to helping out at the flower farm and fresh flower shop that her family ran rather than playing with her friends because of her strict father. She achieved good grades in high school and hoped to go on to university. However, her grandmother met with an accident and she had to give up her plans in order to take care of her grandmother and housework. Even after that, she had to nurse her parents and entered her 60s without ever experiencing romance and men. She laments that she was not able to experience youth.

Oikawa Mitsuhiro as Rei
A black cat with magical powers that was confined in a folding screen in Kisaragi Sumi’s home. He makes 65-year-old Sumi 20 years old in appearance. Then he takes human form to support Sumire, whom he has decided is his mistress, without scaring her.

Machida Keita as Mashiro Yusei
A second-year student of Tsubaki University who is in the same seminar as Kisaragi Sumire. He is cheerful, sincere young man with his own ideas. He helped Sumi in the bus when she was about to drop her mother’s urn, but has no idea that she is Sumire. Although his father is a prominent figure in the local community, he is at odds with him.

Mizusawa Erena as Kosaka Arisa
A second-year student of Tsubaki University who likes Mashiro Yusei. She has the temperament of a queen, harassing others whom she does not like. She is jealous of Kisaragi Sumire who has become close to Mashiro and is mean to her.

Takahashi Hitomi as Ogura Tomiko
A neighbour of Kisaragi Sumi. She is a bothersome housewife who makes accusations about the cat that Sumi’s rears. However, right after she meets Sumire and Rei who identify themselves as Sumi’s distant relatives, her attitude becomes friendly for some reason.

Kohinata Fumiyo as Amano Soun
The chief priest of the temple Tenrakuji which is in charge of the graves of the Kisaragi family. He is sensitive to the spiritual world. When he visits the Kisaragi household, he picks up “scents” that an ordinary person does not notice. He soon detects a secret in Kisaragi family.

This blog contains information and musings on current and upcoming Japanese dramas but is not intended to be comprehensive.
View all posts by jadefrost →
This entry was posted in TV Asahi, Winter 2016 Dramas and tagged Kiritani Mirei, Kohinata Fumiyo, Matsuzaka Keiko, Oikawa Mitsuhiro, Sumika Sumire. Bookmark the permalink.