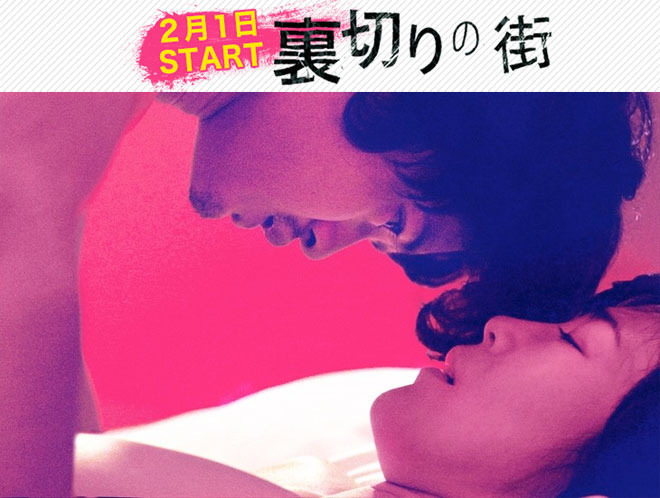 Story
42-year-old Hashimoto Tomoko is an ordinary housewife with an uneventful life. One day, she meets Sugawara Yuichi, a young man 15 years her junior who is a part-time worker. He has a girlfriend Suzuki Satomi who is cohabiting with him while she has her husband Koji. They are each aware of this and yet they have repeated rendezvous in a narrow street along the Chuo train line without clear intent and eventually sleep together. This is their escape from the never-ending emptiness of reality to fill the emotional void. However, an incident starts to sway Tomoko and Yuichi and what awaits them is an extremely cruel truth … …

This blog contains information and musings on current and upcoming Japanese dramas but is not intended to be comprehensive.
View all posts by jadefrost →
This entry was posted in dTV, Winter 2016 Dramas and tagged Hirata Mitsuru, Ikematsu Sosuke, Terajima Shinobu, Uragiri no Machi. Bookmark the permalink.