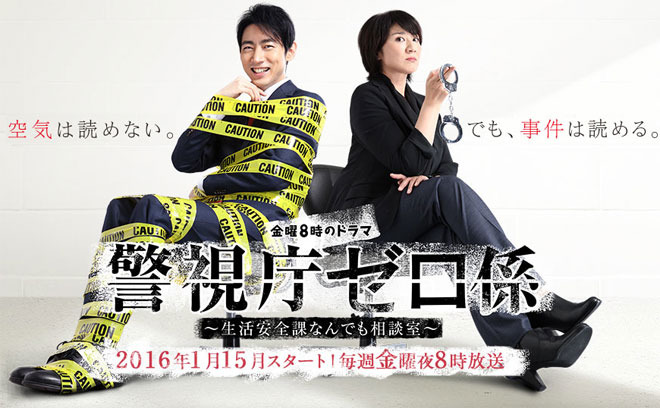 Story
The newly established “anything” consultation office of Suginami Chuo Police Precinct passes off for a new initiative to react quickly to the feedback of the public. It has assembled members who have caused trouble and been cast aside on suspicion of embezzlement and marriage scams. “Zero is zero no matter how you multiply it.” That is to say, good-for-nothings are useless no matter how many people there may be. Superintendent Kobayakawa Fuyuhiko, a career police officer who cannot read situations, takes up a position at this office called the “Zero Section”. His conviction is to “protect citizens!” and he has extraordinary motivation now that he has been transferred from the Tokyo Metropolitan Police Department’s National Research Institute of Police Science to field work. In the middle of this, he gets his first job. While the other members of the section appear reluctant to take an old man who is wandering about into custody, Fuyuhiko raises his hand. Worried about Fuyuhiko running out on his own, the head of the section Kameyama Yoshio convinces an unwilling Terada Torami to accompany him. Fuyuhiko is naive in his behaviour and shows interest in an unrelated burnt rubbish bin at the park they headed to. This annoys the strong-minded, foulmouthed veteran Torami who got herself on the bad side of the Criminal Affairs Division. That night, Fuyuhiko hears about a fire in the neighbourhood and rushes out to the scene. He finds cinders of hemp twine and wood chips in the ruins of the fire. These are the same things in the park’s rubbish bin during the day. Furukawa Yusuke of the Criminal Affairs Division and Terami warn Fuyuhiko not to get involved in matters outside his jurisdiction. Although Fuyuhiko leaves the scene, he goes to various locations from the next day and starts to gather a huge amount of information regard recent fires. Torami is amazed by Fuyuhiko’s frequently bizarre behaviour while Kameyama and the clerk Honjo Yasuko critcise his actions which create friction everywhere. On the other hand, Fuyuhiko declares the fire last night a case of arson after analysing the information. Furthermore it is serial arson. The members of the section are baffled by Fuyuhiko’s explanation which mixes terms that are difficult to understand. However, Torami is stirred up by the experiments that Fuyuhiko attempted and warnings of overstepping in the investigation from the top brass. The Zero Section gradually embarks on investigating the cases.

Characters
Koizumi Kotaro as Kobayakawa Fuyuhiko
A member of the “anything” consultation office of Suginami Chuo Police Precinct. He is a career police officer who graduated from Tokyo University’s law faculty. He says “protect citizens!!!” and has not forgotten his original intention when he became a police officer. All his actions are based on that conviction, but his shortcoming is his inability to read situations. He had been hoping for field work for quite a while, so that he can lend a helping hand to citizens. But he was considered to have no aptitude for it and assigned to the National Research Institute of Police Science until he receives a sudden transfer notice.

Matsushita Yuki as Terada Torami
A member of the “anything” consultation office of Suginami Chuo Police Precinct. She is a non-career veteran detective who worked her way up. She is the old type of detective who is in contrast to Kobayakawa Fuyuhiko. An Amazonian and sarcastic. Although she is outstanding as a detective, her shortcomings are her somewhat reckless investigation methods and even defiance of her superiors if she has any objection.

Adachi Yumi as Honjo Yasuko
A member of the “anything” consultation office of Suginami Chuo Police Precinct. She does clerical work from 9 to 5 and efficiency is her policy. Although she is capable in her work, she is sarcastic and detests inefficient work, but loves scandals. She previously worked at Marunouchi Higashi Police Precinct as a senior administrator, but she was suspected of embezzlement and got transferred by the chief of the police precinct who did not want to be charged with supervisory liability.

Harada Natsuki as Anchi Risako
A member of the “anything” consultation office of Suginami Chuo Police Precinct. She is a beautiful femme fatale who runs hot and cold. She used to be with Shibuya Minami Police Precinct but a steady stream of male detectives became victims of her model-like figure and wiles until it developed into a “marriage scam” uproar and she was forced to transfer. However, Kobayakawa Fuyuhiko is immune to her charms.

Tezuka Toru as Furukawa Yusuke
A proud senior detective of the Criminal Affairs Division of Suginami Chuo Police Precinct. Because he worked his way up on the frontline and has extensive experience, his pride as a detective is greater than others. He is at loggerheads with Terada Torami and presumes that Kobayakawa Fuyuhiko’s analyses are nothing but talk. Furthermore, he will take credit for everything. He has the nature of a hyena.

Terajima Susumu as Iwase Koichiro
A mysterious informant who frequently appears at Suginami Chuo Police Precinct. He is a regular customer of the pub “Harukichi” and an elusive guy. In fact, he and Terada Torami have known each other for a long time and she had solicited information from him repeatedly. He gathers a lot of information about the precinct’s surroundings through his mysterious information network. Although he is a man of few words and unsociable …

Ishimaru Kenjiro as Tanimoto Keizo
The deputy chief of Suginami Chuo Police Precinct. He has high ambitions and unlike the mild chief with a non-interference policy, he always patrols the precinct and checks on the movements of employees. His nickname is “Daruma”. He will pursue poor conduct and annoyances within the precinct to the very end. The top brass of the Tokyo Metropolitan Police Department makes use of his career ambition to make him cooperate in setting up the “anything” consultation office.

Osugi Ren as Kameyama Yoshio
A timid, indecisive section chief of the “anything” consultation office. He has a weak stomach which will give him trouble once he is under pressure and slightly stressed. He is a hen-pecked husband who fears his wife the most. Repressed socially and professionally, he would day dream. In his imaginations, he will become the commissioner of the Tokyo Metropolitan Police Department and have an affair. He is a middle manager whose philosophy is peace at any price.

This blog contains information and musings on current and upcoming Japanese dramas but is not intended to be comprehensive.
View all posts by jadefrost →
This entry was posted in TV Tokyo, Winter 2016 Dramas and tagged Adachi Yumi, Harada Natsuki, Keishichou Zero-gakari Series, Koizumi Kotaro, Matsushita Yuki, Osugi Ren, Terajima Susumu. Bookmark the permalink.