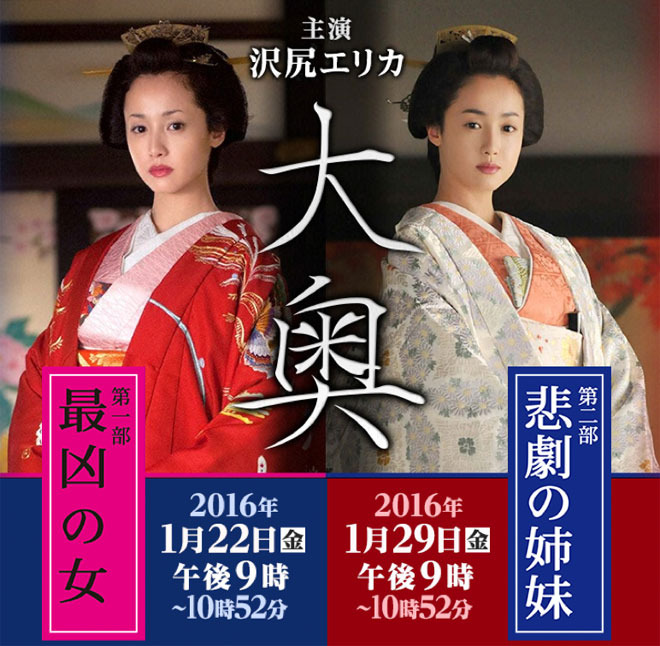 Date: From 9.00 p.m., 29 January 2016
Scriptwriter: Asano Taeko (Dakara Koya, Utsukushiki Wana, Ten no Hakobune)
Cast: Sawajiri Erika, Renbutsu Misako, Itao Itsuji, Nukumizu Yoichi, Mitsuura Yasuko, Washio Machiko, Yamaguchi Kaori, Kubota Maki, Watanabe Shu, Kubota Hidetoshi, Narimiya Hiroki, Asano Yuko
Synopsis: The 11th shogun Tokugawa Ienari (Narimiya Hiroki) has a poor relationship with his legal wife Tadako (Mitsuura Yasuko) and sleeps with a different female every night. He has such a fickle nature that amazes the court lady Osaki no Tsubone (Asano Yuko). However, Ienari still has not been blessed with a child, leading those around him to scramble to find a woman who will capture his heart and bear his heir. Ienari’s close aide Nakano Kiyoshige (Itao Itsuji) has his eyes fixed on his subordinate Sakai Tadayasu’s (Nukumizu Yoichi) two daughters who are reputed to be beauties. Ume (Sawajiri Erika) and Uta (Renbutsu Misako) are ordered to have an audience with Ienari at a banquet at Hama Goten. Elder sister Ume is a remarkable beauty, pure and gentle while younger sister Uta is an expert with the bow and arrow, strong-willed and fiery. Having received word of the audience with the shogun, Ume prepares herself to enter the inner palace. On the other hand, Uta’s animosity for her biddable elder sister prompts her declaration of war, “The one who will be chosen as concubine will be me and not you.” The two sisters come before Ienari in sequence at the banquet where their father has been put in charge of entertainment. Ume performs a beautiful, spectacular dance and Uta gives an acrobatic dance dressed as a man. While Ienari is mesmerised by the defiant entertainment that Uta put on, the arrow of a man who slipped into the banquet strikes and injures him. The attacker is the stable hand Otsuki Hyogo (Watanabe Shu) who harbours feelings for Uta. When Tadayasu is personally given capital punishment by Ienari for incurring his wrath, Ume unhesitatingly puts her life on the line to plead for her father’s life. Ienari is moved by her and declares that he is willing to overlook this in exchange for Ume entering the inner palace. Ume bids farewell to her fiance Yoshida Genichiro (Kubota Hidetoshi), a low-ranking vassal, and enters the inner palace with anxiety. However, she is treated kindly by Ienari. Ume starts to experience happiness as a female and soon conceives his child. Uta visits a pregnant Ume and is surprised by her sister’s dignified air and confident smile that makes her seem like a different person in the luxurious and dazzling inner palace. Feeling a sense of defeat and a strong jealousy, Uta gets close to Ienari who has come to the inner palace to see Ume and confides her yearning as well as the tears shed for him every night. Uta’s wish comes true and she is also ordered to enter the inner palace by Ienari. She disregards Ume and makes Ienari fall for her with seductive words and behaviour. When Ienari is dejected that the child that Ume later gives birth to is a princess, Uta swears Ienari to favour only her … …
Official Website: www.fujitv.co.jp/oh-oku

This blog contains information and musings on current and upcoming Japanese dramas but is not intended to be comprehensive.
View all posts by jadefrost →
This entry was posted in Fuji TV, Winter 2016 Drama Specials and tagged Narimiya Hiroki, Ooku, Renbutsu Misako, Sawajiri Erika. Bookmark the permalink.