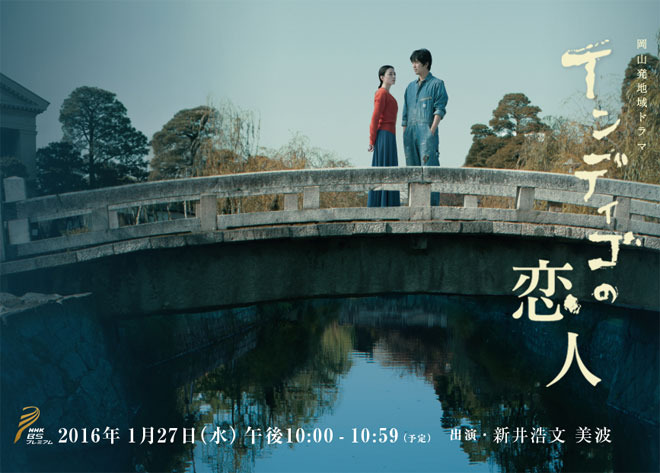 Date: From 10.00 p.m., 27 January 2016
Scriptwriter: Arai Shuko (Higanbana, Dark Suits, Shima no Sensei)
Cast: Arai Hirofumi, Minami, Okada Yoshinori, Yamaguchi Mayu, Kubota Sayu, Aoyama Sota, Kataoka Tsurutaro
Synopsis: Kurashiki City in Okayama Prefecture is famous worldwide for Okayama Denim. Harada Kenji (Arai Hirofumi) works as a denim craftsman in the city. He distresses and dyes blue denim at a factory in Kojima district every day. Eight years ago, Kenji was still a pianist in a jazz band and was approached by an agency in Tokyo to make their debut. However, he gave up on his childhood dream of becoming a jazz pianist to bring up his niece Sayo (Yamaguchi Mayu) after his older sister, who was a single mother, died in an accident. He has lived without touching a piano keyboard in eight years. One day, Kenji happens to meet a painter Nonaka Miyuki (Minami) who came as an artist-in-residence of Kurashiki city’s famous art museum and stayed long term. As Kenji helps Miyuki with the composition of her paintings, she captivates his heart. He is drawn to her single-mindedness and charm like a foreigner. Miyuki also grows to like Kenji who tries to give her dedicated support. However, she has a past that is difficult to erase and tell anyone about. Kenji learns about this and is disturbed. But a letter sent to Kenji from Miyuki through Kurashiki’s special post called “Anniversary Letter”, begins to change the future for the two of them as they shed their pasts and start new lives.
Official Website: www.nhk.or.jp/okayama/indigo

This blog contains information and musings on current and upcoming Japanese dramas but is not intended to be comprehensive.
View all posts by jadefrost →
This entry was posted in NHK, Winter 2016 Drama Specials and tagged Indigo no Koibito. Bookmark the permalink.