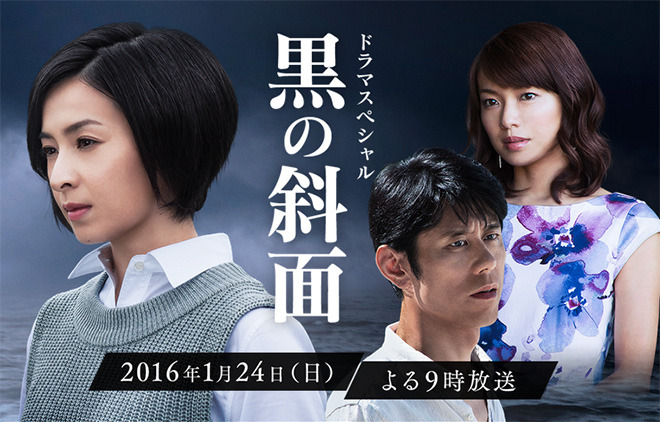 Date: From 9.00 p.m., 24 January 2016
Original Work: Kuro no Shamen by Kikushima Ryuzo
Scriptwriter: Yoshikawa Jiro
Cast: Dan Rei, Uchiyama Rina, Harada Taizo, Watanabe Ikkei, Endo Kumiko, Sano Shiro
Synopsis: Tsujii Takashi (Harada Taizo) works for a large construction company and lives with his wife of 10 years, Keiko (Dan Rei), in a house along the coast of Hayama in Kanagawa Prefecture. They are still happily married. Takashi would give Keiko a sapphire pendant on her birthday and they are seen as an ideal couple by the people around them. But at some point, they started to hide what they really feel and live with consideration for each other. One day, an unusually tense Takashi returns home with a purple trolley bag that Keiko does not recognise. He tells her not to touch the bag which has confidential company documents that he will be taking with him for a business trip to Kumamoto. On that day, he hurriedly takes the last flight to his destination. However, Keiko happens to see that the bag is full of 10,000 yen notes when they are parting. Although she is overcome with a feeling of foreboding, she sends him off without being about to ask about the large sum of money. Takashi arrives at Haneda Airport where an unexpected person calls out to him. His mistress Kawakami Taeko (Uchiyama Rina) who had just said that she is leaving him over the phone the other day has been lying in wait. She threatens to expose everything to Keiko. So Takashi makes his colleague Shimizu Yoshiro (Makita Tetsuya) go alone to Kumamoto on the last flight while he stays with Taeko for one night and takes the next morning’s flight over. Then Takashi hands his plane ticket to a young man Tajima Seiichi (Kaneko Takatoshi) who is desperate to go to Kumanoto where his fiancee is waiting. However, the last flight that Takashi was supposed to board crashes right after takeoff. Taeko learns about this while Takashi is in the shower and decides to hide the truth from him. Some time later, she finally informs him. Takashi is shocked. Furthermore, his name is on the list of passengers presumed dead. It appears that Tajima boarded the flight without changing the name on the ticket. Takashi attempts to contact Keiko and his company hastily. However, Taeko calmly asks how he intends to explain the situation after such a long time. Meanwhile, one misfortune follows another for Keiko who is already shaken by the sudden circumstances. Takashi’s boss Toyama Koji (Watanabe Ikkei) reveals that before the business trip, Takashi had secretly taken out a purple trolley bag filled with 100 million yen embezzled by Hata Miyuki (Endo Kumiko) of the Accounting Department, in order to bribe an important lawmaker. However, Keiko meets Yamana Hitomi (Kitahara Rie) right after that and starts to have doubts about her husband’s death. According to Hitomi, her fiance Tajima had said to her on the phone right before the plane bound for Kumamoto took off that he received a ticket from a man called Tsujii Takashi. Takashi did not board the flight that crashed? If that is the case, why has he not contacted her even though he is alive? Keiko’s dark misgivings about her husband swell. At that moment, Miyuki is found strangled to death on a coast near the scene of the crash. Detective Honma (Sano Shiro) is suspicious of the deaths of people working for the same company at almost the same time.
Official Website: www.tv-asahi.co.jp/kuronoshamen

This blog contains information and musings on current and upcoming Japanese dramas but is not intended to be comprehensive.
View all posts by jadefrost →
This entry was posted in TV Asahi, Winter 2016 Drama Specials and tagged Dan Rei, Kuro no Shamen, Sano Shiro, Uchiyama Rina. Bookmark the permalink.