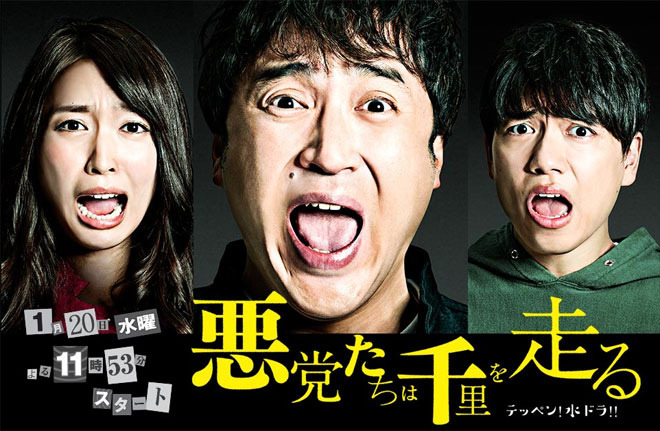 Story
Takasugi Atsuro had been a drama director of a production company. But his entire proposal was stolen by his boss Nezu Kazuhisa and he was also given a setdown, “You would be absolutely worthless without the company”. He quits the company in a fury and is even saddled with 10 million yen in debt. Only the good-natured assistant director Sonobe Yuto, whom he has been working with, follows him. Takasugi and Sonobe discuss their future at Takasugi’s apartment. Takasugi talks about filming an independent movie while Sonobe, who is always broke, is worried about the future because his wife is pregnant with twins. The two of them come up with the idea to kidnap a wealthy family’s dog. Their target is the pet dog Rex of the Shibuis. Shibui Takahiro and Ayako have a son called Takumi who is a child actor in dramas. Ayako is an avid stage mother and always brings Rex to the set. Takasugi and Sonobe are convinced that she will pay a large ransom for the dog. When Sonobe temporarily leaves the room, a mysterious lady Mikami Natsuko takes advantage to burst in. Takasugi is not acquainted with Natsuko and is surprised by her appearance. He is told that she spent last night with him in this apartment and he is disturbed. Natsuko somehow knows about their game plan to kidnap the dog. Then Takumi curiously comes to the apartment too. Even he knows about the dog kidnapping scheme.bTakumi suggests that they kidnap him instead. They cannot possibly do that and Takasugi sends Takumi home while Natsuko stays behind. A man who identifies himself as John Lennon suddenly calls Takasugi on his mobile phone. He says Takumi has been kidnapped and orders Takasugi to be the kidnapper! What is the person’s true motive?

Characters
Muro Tsuyoshi as Takasugi Atsuro
A drama director of a production company. A self-centred 35-year-old who thinks his only objective in life is to make dramas and movies. He is smug and uncooperative. He clashes with his boss Nezu Kazuhisa, resigns from his company and is saddled with a debt of 10 million yen. He and his subordinate Sonobe Yuto plan to kidnap a dog but they are made kidnappers through an unexpected turn of events.

Yamazaki Ikusaburo as Sonobe Yuto
akasugi Atsuro’s subordinate. A contract employee of the production company and drama assistant director. He is a pragmatic guy of today who reads situations and lives with balance, but at home he is henpecked by his wife. Because his wife recently became pregnant with twins, he needs money and is insecure about the future. He suggests to Takasugi that they kidnap the dog.

Mitsuishi Ken as Nezu Kazuhisa
The boss of Takasugi Atsuro and Sonobe Yuto. A drama producer. He is a brazen guy who rips off Takasugi’s drama proposal, then plays dumb. He has a conflict with Takasugi and demands 10 million yen in compensation after making him resign.

Kurokawa Mei as Mikami Natsuko
A mysterious woman around 30 who enters Takasugi Atsuro’s apartment without his permission. She possesses a sensuality that tempts men. She takes an interest in the dog kidnapping plot of Takasugi and Sonobe Yuto, and joins them. Her relationship with Takasugi, her own past and such are mysteries.

Konno Mahiru as Shibui Ayako
Shibui Takumi’s mother. A former actress with good looks. Making her son Takumi a famous child star has become her purpose in life. She has meals Takasugi Atsuro behind her husband’s back.

Horibe Keisuke as Shibui Takahiro
Shibui Takumi’s father. He is the president of Shibui Group which runs mobile game companies nationwide. Although he is in a position that everyone envies, he is busy with work and has grown slightly apart from his wife Ayako. His flaw is that he is very stingy.

Onishi Riku as Shibui Takumi
The only child of the wealthy Shibuis. He belongs to a talent agency for kids and has even starred in Takasugi Atsuro’s drama. He is pampered by the people around him because of his father’s influence and feels an emptiness as well as frustrated. On the other hand, he has an excessively impertinent and arrogant attitude. While Takasugi and Sonobe Yuta are developing a plan to kidnap the dog, he suddenly visits the apartment and suggests that they kidnap him instead.

? as John Lennon
A mysterious genius criminal. He only gives instructions through phone calls and emails and does not show himself. He sets Takasugi Atsuro and Sonobe Yuto up as kidnappers.

Episodes
#1: Why am I a Kidnapper?
#2: Performing a Part in Own Play!? Kidnapper is a Child?!
#3: Use the Kidnapping? Mysterious Female’s True Identity
#4: Betrayal?! Kidnapper is Family!?
#5: Righteous Kidnapper who Rescues Children!?
#6: Approaching Police! Save Children’s Lives
#7: Get Hold of 100 million yen in Cash!!
#8: Running for Lives for Children’s Sake!!

This blog contains information and musings on current and upcoming Japanese dramas but is not intended to be comprehensive.
View all posts by jadefrost →
This entry was posted in TBS/MBS, Winter 2016 Dramas and tagged Akutotachi wa Senri o Hashiru, Mitsuishi Ken, Muro Tsuyoshi. Bookmark the permalink.