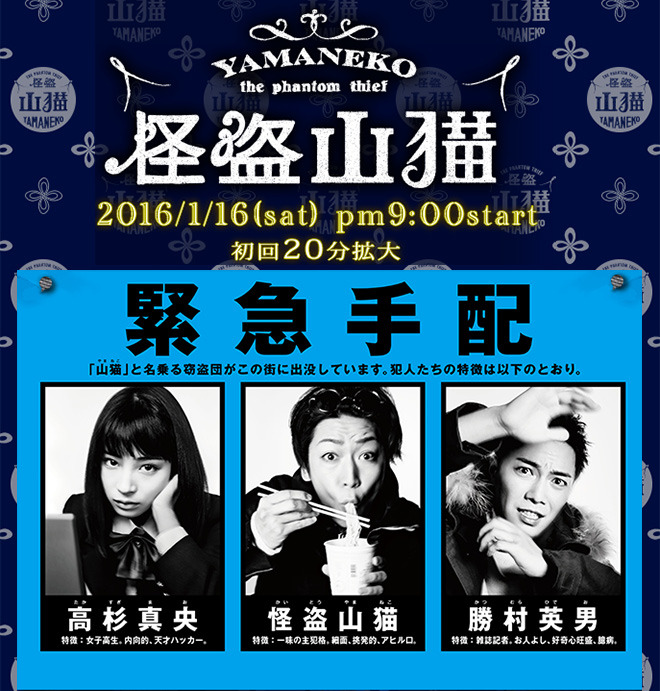 Story
Yamaneko is a genius thief who shows up without regard for district, location and level of difficulty. He splendidly steals large amounts of funds from corporations that make money with dirty tricks, and at the same time exposes their wrongdoings. Is he a chivalrous thief or a villain? The movements of this shadowy, charismatic thief grabs the attention and even support of people around the world. He has a princely cocky and carefree behaviour. But the cold expression he displays every now and then, reveals his dark heart. One night, Yamaneko tries to steal data from the office of a political group, which will be evidence of the dirty deeds of the group that carries out bank transfer fraud behind its pretense of being a good organisation. However, a mysterious, genius hacker called the Devil gets in the way and restores the security that Yamaneko’s buddy Hosoda had disabled. Yamaneko is nearly arrested. He gets close to the magazine writer Katsumura Hideo in order to find out the Devil’s true identity. Yamaneko draws out information from Yamaneko that high school student Takasugi Mao is the Devil and quickly goes to meet her. Mao steals customer information through hacking and gives it to her father who is the president of a company which deals with personal information. Yamaneko appears in front of Mao and declares that he will steal money from her father’s company. However, the company’s safe is protected by a flawless security system. Will Yamaneko be able to steal the money? What is his true objective?

Characters
Kamenashi Kazuya as Yamaneko
Acknowledged as a genius thief, he steals large sums of money with brilliant methods. At the same time, he exposes the bad deeds of his targets of theft and disappears as if nothing happened. He has never made a mistake. What he is particular about is not how to steal by why steal. He is an unusual thief who will thoroughly investigate a target and decide whether it is worth stealing. He has the disposition of a king. His impudent behaviour, detached attitude and the daring action he takes makes his personality difficult to understand. But at times, his cool gaze gives a glimpse of mystery. Who exactly is he?

Narimiya Hiroki as Katsumura Hideo
A magazine reporter who is in charge of a feature on the cases perpetrated by Yamaneko. He has a great deal of curiosity and recklessly goes headlong into things without considering the consequences. But he is a coward by nature who somehow has a knack for getting involved in danger. However, he comes across as a person who cannot leave someone alone for some reason, and unwittingly stirs maternal instinct. While being twisted around by the words and actions of Yamaneko as he follows Yamaneko to write stories, he becomes like a member of Team Yamaneko without realising it.

Hirose Suzu as Takasugi Mao
A genius hacker who creates a sensation with the name the Devil. She is usually an ordinary high school student, but she is avoided by the students around her and feels lonely. Her only weapon becomes the electronic world. She encounters Yamaneko and his team because her own father becomes Yamaneko’s target in the first case. This meeting will greatly change her way of life … …

Nanao as Kirishima Sakura
A detective of the Tokyo Metropolitan Police Department. She has admired and liked Katsumura Hideo, who treats her like his own younger sister, since student days. Although she is beautiful, she is unpretentious and usually coolly steels herself in male-dominated society, but shows her cute side to Katsumura. Because her late father was a police officer who died while investigating Yamaneko’s cases, she puts herself in the special investigation team which is pursuing Yamaneko.

Kitamura Yukiya as Todo Kenichiro
A very popular newscaster who enjoys the support of viewers. However, after the first case, he suddenly makes a big decision. The Yamaneko cases are largely attributable to him but his intentions are unknown. He seems to have some kind of unusual relationship with detective Sekimoto Shugo but … …

Otsuka Nene as Hosho Rikako
A mysterious member of Team Yamaneko. She has exceptional driving techniques and handles all vehicles well. She normally tends the bar that is Yamaneko’s refuge, and at times, the bewitching expression in her eyes snares the heart of a visiting customer. While she possesses feminine charm, her true intentions and thoughts are complete mysteries. Why is she here and why is she helping? She is a woman who leaves behind riddles.

Sasaki Kuranosuke as Sekimoto Shugo
A detective who works for the Tokyo Metropolitan Police Department. Rank: Inspector. He has been in charge of investigating Yamaneko for some time and heads the investigation task force. He constantly treats Kirishima Sakura who is put in charge of a new Yamaneko case like she is a fledgling detective and she keeps reacting against this. His gaze is completely different from the other detectives, but what he truly thinks is … He is a man of many mysteries.

This blog contains information and musings on current and upcoming Japanese dramas but is not intended to be comprehensive.
View all posts by jadefrost →
This entry was posted in NTV, Winter 2016 Dramas and tagged Hirose Suzu, Kaito Yamaneko, Narimiya Hiroki, Otsuka Nene, Sasaki Kuranosuke. Bookmark the permalink.