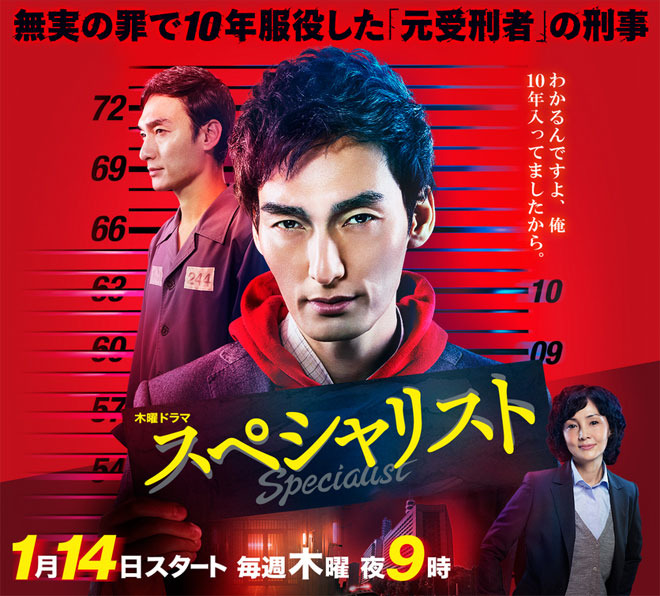 Story
Takuma Yoshito has been incarcerated in a Tokyo prison. This is his second prison term since he was sent to Shiga Chuo Prison for an attempted murder while working with the Kyoto Prefectural Police. It turned out that he was wrongfully convicted the first time and he was released from prison but … … 10 months before the start of the case, Takuma came to the Tokyo Metropolitan Police Department after Kyoto Prefectural Police’s Special Investigation Unit was broken up. At the same time, he was assigned to some department that had does not even have a name. This department is “a team which investigates, collects and analyses information is beyond the bureaucratice organsation for the purpose of dealing with borderless violent crimes” in name because it makes the most of Takuma’s ability to remember all sorts of criminal data. Not long after it was set up, a detective Azuma Maria from the Criminal Investigations Department’s General Affairs Division transfers to the department. She is clearly skeptical of Takuma’s background of solving difficult cases at the Kyoto Prefectural Police’s Special Investigation Unit. Takuma and Maria are ordered by Takido Hiroki, the creater of this new department, to investigate the stabbing of a novelist that occurred at a notable family. Shinguji Naoto, who hung himself in an attempt to commit suicide in a room that was locked from the inside, has a knife in his back. Was it a suicide or a murder? Although it is tough to ascertain the situation at first glance, as soon as Takuma arrives at the scene, he sees through each of the standard mystery tricks – locked room, diagnosis and dying message. Maria is at the mercy of his investigation which lacks focus, but the case progresses in an unexpected direction. The name of the beneficiary of the life insurance policy found in the room’s safe is not Shinguji’s wife, but the butler Kimihara Kanefumi. Learning that his master had committed suicide, Kimihara “disguised it as murder”. Kimihara needs money for medical treatment because he has a sick daughter. But Takuma as well as Maria do not agree that he covered up murder for the sake of the insurance money. To gather evidence, they meet the writer Yokochi Mikiya and lawyer Kondo Tatsuyuki who were at the scene. Shortly after that, Yokochi commits suicide! Takuma realises who the real criminal is, leaves a word and goes to the Shinguji household. However, that word causes him to end up in prison again. Learning about Takuma’s predicament, Anekoji Chinami and the former members of the Special Investigation Unit start to investigate a certain thing … …

Characters
Kusanagi Tsuyoshi as Takuma Yoshito
A detective of the Tokyo Metropolitan Police Department’s General Crime Response Unit which is experimental. When he was a police officer with a desk job at Kyoto Prefectural Police’s Public Relations Department, he was arrested for attempted murder. He received a 15-year jail sentence and served time in prison, but was actually innocent. While he was in prison, he committed all data of the criminals serving time including modus operandi, techniques used, reasons for turning to crime as well as psychological tendencies to memory. On top of that, he became a professional who knows everything about the psychology of people who commit crimes. This “special ability” drew the attention of the top brass and he was reinstated as a detective because of their plan. This was the birth of a detective with an intimate knowledge of criminal psychology. His favourite phrase is “I know. Because I was inside for 10 years.” Despite the unbecoming behaviour he adopts towards detectives, he hates crime more than anyone else. Once this switch comes on, he will become totally absorbed in a case. He got into the Tokyo Metropolitan Police Department in order to expose the truth of his own wrong conviction and a big conspiracy related to it.

Minami Kaho as Anekoji Chinami
A middle-aged detective of the Tokyo Metropolitan Police Department’s General Crime Response Unit. Takuma Yoshito’s former partner. She has a very serious and methodical personality. She has strong pride about her detective job. Although Takuma’s behaviour is unlike a detective and that gave her a hard time. Her husband, who was a police officer, died in the line of duty. Because she relates to Takuma’s hatred of crime, she understands him well too.

Ashina Sei as Matsubara Yuiko
A detective of the Tokyo Metropolitan Police Department’s General Crime Response Unit. She had also belonged to the Second Investigation Division which is in charge of cases involving the electoral fraud and corruption of politicians. She is so strong in data analysis that she was sounded out about a job by the cybercrime unit.

Natsuna as Azuma Maria
A detective of the General Crime Response Unit. She transferred from the joined as a new member Criminal Investigations Department’s General Affairs Division. She gets swayed around by the investigation methods of Takuma Yoshito earnestness. In truth, her uncle is the present commissioner general of the National Police Agency. Is there some sort of ulterior motive regarding her transfer?

Hiraoka Yuta as Horikawa Kohei
A detective of the Tokyo Metropolitan Police Department’s General Crime Response Unit. Before this, he was a security police with the Security Department. He is easily misunderstood and has been isolated because he is not good at communicating with people. Even when he talks, he has a curt manner. He is a hardworking person who is reliable in his work. Despite his appearance, he is skilled in every combat sport.

Fukikoshi Mitsuru as Takido Hiroki
A security director of the National Police Agency’s Security Bureau, but he has been seconded to the Tokyo Metropolitan Police Department. He dragged Takuma Yoshito to Tokyo on the orders of the commissioner general of the National Police Agency and set up a department that would make the best use of Takuma’s ability. The pretext is “a team which investigates, collects and analyses information is beyond the bureaucratice organsation for the purpose of dealing with borderless violent crimes” but what is his true intention?

This blog contains information and musings on current and upcoming Japanese dramas but is not intended to be comprehensive.
View all posts by jadefrost →
This entry was posted in TV Asahi, Winter 2016 Dramas and tagged Ashina Sei, Fukikoshi Mitsuru, Kusanagi Tsuyoshi, Specialist Series. Bookmark the permalink.