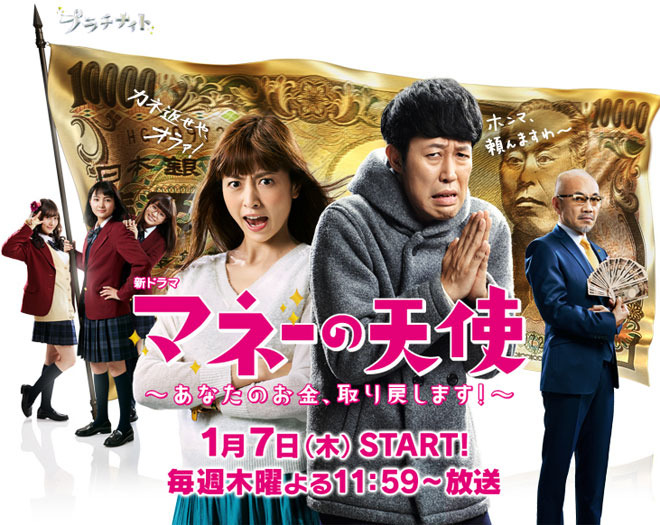 Story
Osaka. Takeuchi Shigeru is extremely nice and diligent. He cannot socialise well because of his personality and even gets rejected for the part-time jobs that he interviewed for. With barely any money and at his wits end, he happens to meet Takarada Tomikazu, the president of a company he had worked at. He recalls that he was not paid his salary by this company and requests for it in desperation. However, Takarada feigns innocence. On top of that, Takeuchi is brushed off by the lawyer Tonomura Kenichiro at the law firm that he rushes into. Reaching the end of his rope, Takeuchi unexpectedly arrives at a Mexican restaurant called Alivio where restaurant manager Kurihara Risa provides a financial consultation service. Risa is studying to become a lawyer. She set up the service in the restaurant to help people who have money problems because she was involved in great financial trouble in the past. This encounter with Risa leads Takeuchi to help her and together they confront all sorts of money problems.

Characters
Koyabu Kazutoyo as Takeuchi Shigeru
An extremely nice and diligent man who does not know how to treat people with skepticism. He upholds his grandmother’s teachings “Do not suspect a person” “No one is bad at heart” and lives honest to a fault. He was doing well until university. When he entered the workforce, mistakes were pushed to him and the money he loaned was not returned. He was used, demoted and soon loses his job. Just as he is at a loss, he is saved by Kurihara Risa and the girls who work part-time at Alivio, and he ends up helping them out.

Katase Nana as Kurihara Risa
She runs the Mexican restaurant Alivio while she studies to become a lawyer. She was once saved from great financial trouble. Wanting to help people like herself who have money problems, she sets up a financial consultation service in the restaurant. She has some connection to Tonomura Kenichiro in the past.

Aoi Wakana as Sugawara Madoka
A high school girl with a cool and unemotional personality who works part-time at Alivio. She backs up Kurihara Risa who tries to help people in financial difficulty with her legal knowledge. This knowledge seems to be inherited from her father … … Like Risa, she has some connection to Tonomura Kenichiro.

Yagura Fuko as Inoue Arisu
A high school girl who works part-time at Alivio. Sugawara Madoka’s friend. A typical girl, she freely uses social networking sites and prides herself in her large number of acquaintances.

Fujita Miria as Musashigawa Hanako
A high school girl who works part-time at Alivio. Sugawara Madoka’s friend. Contrary to her appearance, she is a big eater. She puts everything she has into undercover investigations.

Takenaka Naoto as Tonomura Kenichiro
A capable lawyer who will not take work that is not profitable. He has confrontations with Kurihara Risa and the rest regarding the financial troubles of customers. As the story progresses, his connection with Risa and Sugawara Madoka are gradually revealed.

This blog contains information and musings on current and upcoming Japanese dramas but is not intended to be comprehensive.
View all posts by jadefrost →
This entry was posted in NTV, Winter 2016 Dramas and tagged Mane no Tenshi. Bookmark the permalink.