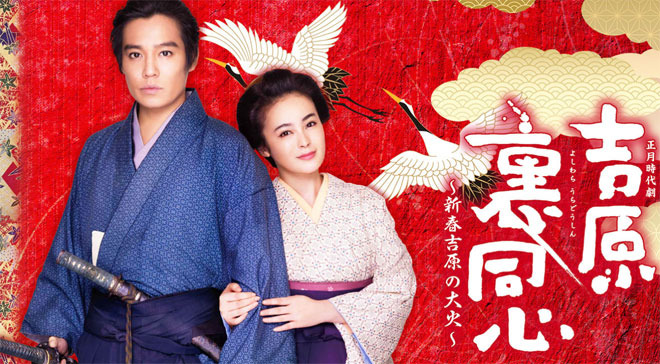 Date: From 7.30 p.m., 3 January 2016
Scriptwriter: Ozaki Masaya (Otona Joshi, Chanpon Tabetaka, Yoshiwara Uradoshin)
Original Work: Yoshiwara Uradoshin by Saeki Yasuhide
Cast: Koide Keisuke, Kanjiya Shihori, Nono Sumika, Yamauchi Takaya, Miyake Hiroki, Ishii Kenichi, Kondo Masaomi, Adachi Yumi, Yamada Jundai, Nomaguchi Toru, Honda Hirotaro, Moro Morooka, Uesugi Shozo, Aso Yumi, Asakura Aki
Synopsis: Bodyguard Kamimori Mikijiro (Koide Keisuke) and his wife Teijo (Kanjiya Shihori) welcome their third new year at Edo’s largest pleasure quarters, the Yoshiwara red light district. On the second day of work of the New Year, an unprecedented disappearance occurs. The courtesan Kosegawa Dayu (Adachi Yumi), who is equally popular as Usuzumi Dayu (Nono Sumika), vanishes right after the courtesans’ procession. Was it a well-planned departure? How did she sneak out of the only doorway? Kosegawa was the daughter of the owner of a large store and also engaged to someone until her father’s business went bankrupt and she had to work at Yoshiwara. A samurai was set to redeem her just before she went missing. The mystery deepens. However, they learn that another once popular courtesan Ichikawa (Asakura Aki) suddenly disappeared from Yoshiwara just a month ago. Mikijiro locates the whereabouts of the women, but they are silenced by a mastermind to keep their mouths shut. Solving the trick of the disappearances, he defeats the villains who prey on the females of the red-light district. Just when it seems as if the case has been solved, Yoshiwara is surround by flames.
Official Website: www4.nhk.or.jp/yoshiwara

This blog contains information and musings on current and upcoming Japanese dramas but is not intended to be comprehensive.
View all posts by jadefrost →
This entry was posted in NHK, Winter 2016 Drama Specials and tagged Adachi Yumi, Aso Yumi, Honda Hirotaro, Kanjiya Shihori, Koide Keisuke, Kondo Masaomi, Yoshiwara Uradoshin Series. Bookmark the permalink.