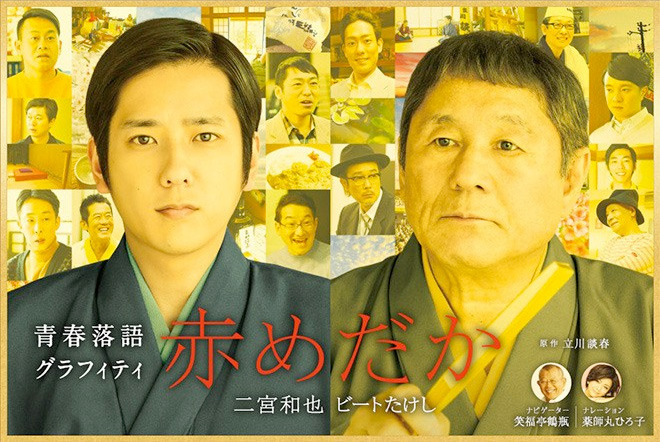 Date: From 9.00 p.m., 28 December 2015
Original Work: Akamedaka by Tatekawa Danshun
Scriptwriter: Yaitsu Hiroyuki (Shitamachi Rocket (TBS), Keiji 7-nin, Ryusei Wagon)
Cast: Ninomiya Kazunari, Beat Takeshi, Hamada Gaku, Miyagawa Daisuke, Seino Nana, Emoto Tokio, Arai Hirofumi, Sada Masahi, Yanagiya Kyotaro, Shunputei Shota (guest star), Shunputei Koasa (guest star), Nakamura Kankuro (guest star), Sanyutei Enraku (guest star), Sakai Maki (guest star), Shoji Utae (guest star), Terajima Susumu (guest star), Kishimoto Kayoko (guest star), Lasalle Ishii (guest star), Kitamura Yukiya (guest star), Kagawa Teruyuki (guest star), Lily Franky (guest star), Yakushimaru Hiroko (guest star), Shofukutei Tsurube (guest star)
Synopsis: During the unprecedented mid-1980s manzai (two-person comedy act) boom, Sasaki Nobuyuki (Ninomiya Kazunari) meets the rakugo storyteller Tatekawa Danshi (Beat Takeshi) at a junior high school performing arts appreciation festival. Some years after this electrifying encounter, Nobuyuki is now a high school student. He knocks on the door of the Tatekawa school with the purpose of becoming Danshi’s disciple. Danshi sternly tells him to bring his parents if he wants to quit school and become his disciple. The Tatekawa school does not allow a person to be a disciple without the support of parents. Nobuyuki tries to persuade his parents, but he is told by his father (Terajima Susumu), “At the very least, finish high school.” He breaks off with his father and leaves home. The next day, Nobuyuki visits Danshi and lies that both parents met a freak accident and died. He begs Danshi to make him a disciple. He will live in a newspaper stand and earn money by working part-time. This spurs Danshi to give Nobuyuki the name “Danshun”, and he gains admission into the Tatekawa school. Dandan (Kitamura Yukiya), Kansai (Miyagawa Daisuke) and Danboru (Arai Hirofumi) are Danshi’s senior disciples. Danshun does the household chores and other unreasonable demands instructed by Danshi together with them every day. He wonders if this is training and why Danshi does not give them lessons in rakugo. One day, he is told by a senior disciple Shinosuke (Kagawa Teruyuki), “If you don’t like it, become a futatsume quickly”. The ranks of a rakugo storyteller are minarai, zenza, futatsume and shinuchi. He will finally be recognised as a rakugo storyteller and be able to hold rakugo performances freely after he becomes a futatsume. At the Tatekawa school, if a disciple can remember 50 rakugo classics and convincingly perform the material selected from among these by the head of the school on the spot, he will be able to advance to the rank of futatsume regardless of the number of years he has been training. Shinosuke achieved this within one and a half years of becoming a disciple and is now a futatsume. Danshun finally sees what he should do and memorises material without sparing time for sleep. About half a year passes. Danshun finally gains his parents’ approval and is able to get minimal living expenses. He quits his part-time job at the newspaper stand, gains Danshi’s favour and develops steadily. But one day, when Danshi says he will give him lessons, Danshun, who has caught a cold, declines because his thought is that he must not cause trouble for his master. This displeases Danshi and after that, he never offers to give lessons again. Danshun is told to work at Tsukiji for one year if he wants to continue as Danshi’s disciple. The word of the master is law in the world of rakugo. Danshun has no choice but to help out and sell siew mai at Tsukiji. However, he hears from Shinosuke that there is a disciple who refused this “Tsukiji training” and goes to complain about this disciple Shiraku (Hamada Gaku) but … …
Official Website: www.tbs.co.jp/akamedaka

This blog contains information and musings on current and upcoming Japanese dramas but is not intended to be comprehensive.
View all posts by jadefrost →
This entry was posted in Fall 2015 Drama Specials, TBS/MBS and tagged Akamedaka, Beat Takeshi, Hamada Gaku, Kagawa Teruyuki, Lily Franky, Ninomiya Kazunari, Sakai Maki, Yakushimaru Hiroko. Bookmark the permalink.