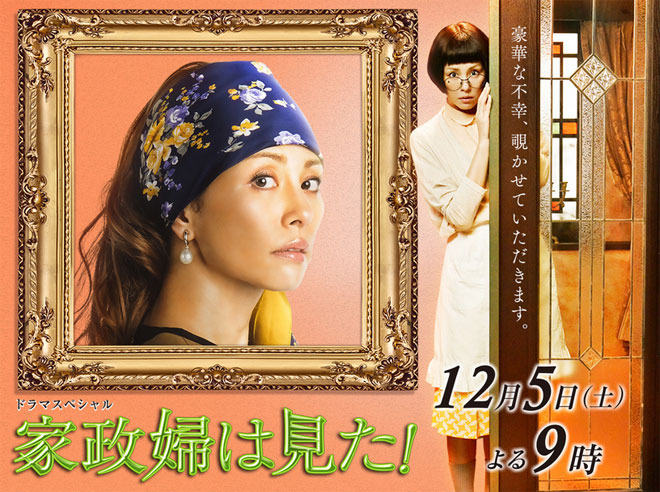 Date: From 9.00 p.m., 5 December 2015
Scriptwriter: Takeyama Yo (Kaseifu wa Mita! 2014, Yakou no Kaidan)
Cast: Yonekura Ryoko, Zaizen Naomi, Takaizumi Atsuko, Ikeda Tetsuhiro, Nanao, Kaneko Takatoshi, Yokota Eiji, Azuma Chizuru, Nishida Toshiyuki
Synopsis: The treasure of the company Teikoku Shinju, a natural pearl called the ‘Golden Star’, is stolen. The ‘Golden Star’ is said to be expensive enough to buy a New York skyscraper. When the theft is made public, Teikoku Shinju’s share price plunges. This triggers an internal struggle between the chairman Iwakura Jusaburo (Nishida Toshiyuki) and president Iwakura Tsuneko (Zaizen Naomi) for the company president’s position. Tsuneko, the daughter of Teikoku Shinju’s founder and Jusaburo’s stepsister, is forced to take responsibility and step down. Learning about the fmaily’s infighting from media reports, Sawaguchi Nobuko (Yonekura Ryoko) hides her beauty with black glasses and loose, disheveled hair, and goes into the home as a housekeeper. She has a specific objective to fulfil at the Iwakura household. Nobuko had gone to see the ‘Golden Star’, which was displayed in a department store, and encountered an enigmatic man (Yokota Eiji) who suddenly appeared in front of her. The man seemed to have a connection to the ‘Golden Pearl’ and the Iwakura family. He had encouraged her to try wearing the pearl like the ‘Girl with a Pearl Earring’ painted by Vemeer. As customers and news reporters swarmed around them, Nobuko had fled the place without thinking. But in doing so, the precious pearl earring was lost. According to store personnel, that man had taken it out. Nobuko’s intuition tells her that the man is involved in the theft of the ‘Golden Star’ and she guesses he will show up at the Iwakura home some day. There is a portrait in the Iwakura home of a man who resembles him as if in confirmation of her conjecture. What is this man’s true identity? After that, the more the battle between the chairman and company president heats up, the more the share price of Teikoku Shinju continues to mysteriously rise. Why did the pearl disappear? Nobuko who has peeked at the secrets and conspiracies in the mansion, takes action … …
Official Website: www.tv-asahi.co.jp/kaseifuwamita2

This blog contains information and musings on current and upcoming Japanese dramas but is not intended to be comprehensive.
View all posts by jadefrost →
This entry was posted in Fall 2015 Drama Specials, TV Asahi and tagged Kaseifu wa Mita! Series, Nishida Toshiyuki, Yonekura Ryoko. Bookmark the permalink.