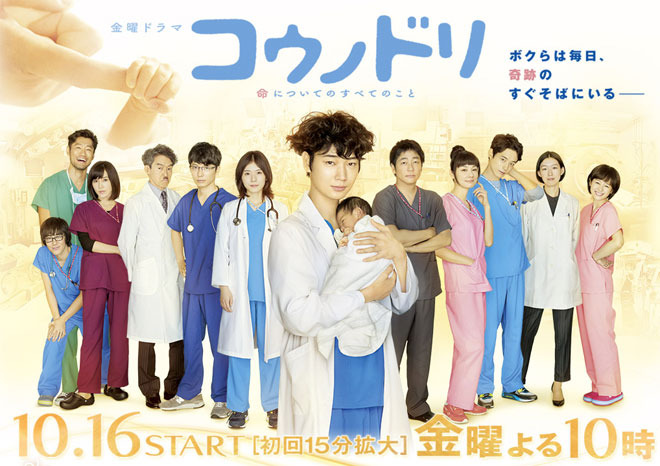 Story
A mysterious, talented pianist named Baby is performing live at a club in Tokyo. His live performance abruptly ends just 10 minutes after he started playing even though there is a full audience. What they do not realise is that Baby’s true identity is Kounotori Sakura who is a obstetrician at Persona General Medical Centre. He has been summoned by a phone call from a bewildered rookie obstetrician Shimoya Kae following an ambulance’s request that the centre accept a pregnant woman, Yano Natsuki. This pregnant woman has never undergone a pregnancy checkup and the weeks of pregnancy is not known too. The risks for someone like her is extremely high. If she has an infectious disease, she will be an extremely dangerous patient to the medical staff as well as other patients. However, Sakura says the mother is at fault and the baby inside her is innocent. He even asks for the support of the department of neonatology. Imahashi Takayuki, the leader of the department, suppresses Shirakawa Ryo and others who are hesitant, and makes the decision to accept the baby. Furthermore, Sakura instructs that they get medical social worker Mukai Shoko to come in order to follow-up on the pregnant woman. Then a veteran obstetric nurse Komatsu Rumiko also rushes over. Will the team work of Sakura and the perinatal medical team bring about a miracle?

Characters
Ayano Go as Kounotori Sakura
An obstetrician and also a genius pianist with the name ‘Baby’. The team leader of the department of obstetrics and gynaecology, he has the confidence of his fellow doctors and patients. He has been working with the wish of congratulating all babies who have been born. In fact, his mother, who was a single mother, passed away shortly after his birth and he was placed with a home for infants and a children’s orphanage. He was raised with love by someone whom he adores as his mother. From that time, he was taught the piano and to put his feelings of joy, sadness and pain in the piano. Baby composes and plays his own tunes which transcend genres such as classic, jazz and pop. Sometimes he would get summoned back to the hospital during a live performance and disappear from the stage. However, he is exceptionally popular because of his mysterious identity in addition to his excellent musical composition and techniques.

Matsuoka Mayu as Shimoya Kae
A rookie obstetrician who gets out on control at times because of her youth, but is a diligent doctor. She is in the later phase of her housemanship and is still helpless and also unreliable. As the person with the lowest position in the team led by Kounotori Sakura, she gets yelled at every day as she learns. She hopes to be like Sakura and gain the confidence of patients some day. Although she is often appointed by expectant mothers because she is female, she does not have the skills and knowledge to match and she is frequently unable to respond to their confidence. On such occasions, she would be overcome by a sense of failure, consoled by Sakura and Komatsu and vow in her heart every day that she will do better. Because she and Shirakawa Ryo from the neonatal care department joined at the same time, they complain to and encourage each other and their relationship is tinged with a sense of rivalry.

Hoshino Gen as Shinomiya Haruki
An obstetrician who joined at the same time as Kounotori Sakura. He used to be passionate and smiled often until some incident happened. Now he coldly thrusts reality even at patients and is left out by the people around him. No one has seen him smile besides one patient … … Although his personality is the complete opposite of the compassionate Sakura, they respect and trust each other.

Eguchi Noriko as Mukai Shoko
A medical social worker. She is in charge of patients’ livelihood support and emotional care of at Persona General Medical Centre and deals with patients from a perspective that is different from the doctors. She gives advice to expectant mothers with no pre-natal care and pregnant women suffering from domestic violence, and is involved in many aspects with Kounotori Sakura and the other doctors.

Omori Nao as Imahashi Takayuki
The head of the neonatal care department and concurrently the chief of the perinatal centre. He fights with tiny lives less than 1,000 grams in the neonatal ICU every day. He is not sociable and does not say a lot. But he always asks himself what is happiness to the babies and the families, and he is passionate about neonatal care. Because of this, even the doctors from the other departments view him with awe. He is a person whom Kounotori Sakura respects.

Asano Kazuyuki as Osawa Masanobu
The director of Persona General Medical Centre. He is always smiling, but it is difficult to know what he is thinking about. As management, he puts the profitability of hospital operations first and fears problems that happens at the department of obstetrics and gynaecology which has a lot of lawsuits. He knows Kounotori Sakura is a pianist. However, he cautions Sakura to keep it secret because there are patients and directors who do not have a good opinion of an obstetrician being a pianist.

Episodes
#1: I’m Glad I Met You ~ The Medical Team’s Miracle
#2: Something More Precious than My Life
#3: The Miracle that Joined Two Hands … Because of Rubella
#4: I Want to Help! This Very Small Life
#5: 14-year-old Mother … A Young Girl’s Decision for the Sake of This Baby
#6: At Time Limit
#7: A Promise to a Mother … What’s an Ideal Birth?
#8: There’s a Birth I Can’t Forget
#9: When a Doctor Leaves a Hospital
#10: The Miracle the Team Made! Save Mother and Baby

This blog contains information and musings on current and upcoming Japanese dramas but is not intended to be comprehensive.
View all posts by jadefrost →
This entry was posted in Fall 2015 Dramas, TBS/MBS and tagged Ayano Go, Eguchi Noriko, Kounodori Series, Matsuoka Mayu, Omori Nao, Yoshida Yo. Bookmark the permalink.