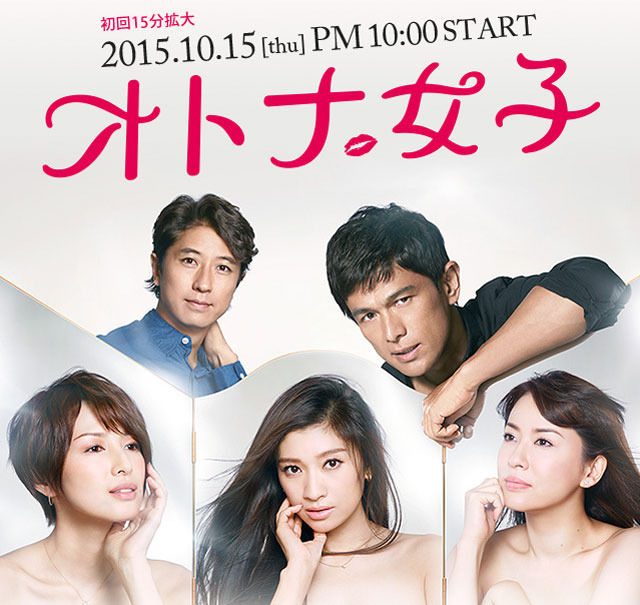 Story
Nakahara Aki and her good friends Osaki Moeko and Sakata Midori are three 40-year-old women who “bring good luck to the men they are involved with, but cannot be happy themselves”. Aki is a single career woman who works for a company that designs romance apps. She has been living with Yamaoka Shinji, a musician six years her junior who is trying to make his debut, and her beloved cat Chikuwa. Although Aki is a sensible person, in a romance, she will do more than her best for her partner and find difficulty attaining happiness. She cannot voice her true feelings to Shinji and only opens up to Moeko, a flower shop manager, and Midori, a divorced mother of three boys. The three of them never miss a chance to have a girls’ night out and complain to one another without hesitation. Aki belongs to the mobile content department and has been appointed to lead a team to create a romance app for women around 40, with her younger subordinates Kudo Miwa, Tachibana Saori and Maekawa Ryosuke. Even Kurita Junichi, her company president and a well-known playboy, has high hopes for this project. One day, Aki comes up with the idea of asking the scriptwriter Takayama Fumio, who has had numerous romance drama hits, to oversee the writing of the game. She checks up on his whereabouts and visits the cafe that he hangs out at. However, as soon as Takayama sees the proposal, he tells her, “At that age, one won’t even feel choked up with emotion” “I would not call a 40-year-old a woman” and does not listen. Aki gets mad with his attitude and ends calling him a “narrow-minded, adolescent man” … …

Characters
Shinohara Ryoko as Nakahara Aki
A 40-year-old office lady who is suddenly transferred from the advertising department to work in the new department that develops romance apps for females. Although she is capable in her work and a sensible person, in romance, she makes too much effort for her boyfriends and has difficulty achieving happiness. She cannot express her true opinions in front of boyfriends and only opens up to her girlfriends and pet cat Chikuwa.

Kichise Michiko as Osaki Moeko
A flower shop manager. One of Nakahara Aki’s good friends. She approaches various men, seeking a marriage partner but has not been successful. She starts a game of romance with Nakahara Aki’s company president Kurita Junichi … …

Suzuki Sawa as Sakata Midori
A divorcee with three sons and one of Nakahara Aki’s good friends. She works part-time at a takeaway shop. She wants to remarry but now her son has a girlfriend. She ends up falling in love with the form teacher of her three sons … …

Tanihara Shosuke as Kurita Junichi
The president of Nakahara Aki’s company. Although wealthy and popular with females, he is single because he wants to enjoy romance for as long as he likes. He is a playboy who always several girlfriends. Despite the perception within the company that he is frivolous, he cares about his employees.

Eguchi Yosuke as Takayama Fumio
A scriptwriter who has had numerous romance drama hits more than 10 years ago, but has not had much works lately. He has his own unique philosophy regarding love and is considered to be a bigot by the people around him. His encounter with Nakahara Aki starts off on the worst possible footing but … …

This blog contains information and musings on current and upcoming Japanese dramas but is not intended to be comprehensive.
View all posts by jadefrost →
This entry was posted in Fall 2015 Dramas, Fuji TV and tagged Eguchi Yosuke, Kichise Michiko, Otona Joshi, Ozaki Masaya, Shinohara Ryoko, Suzuki Sawa, Tanihara Shosuke. Bookmark the permalink.