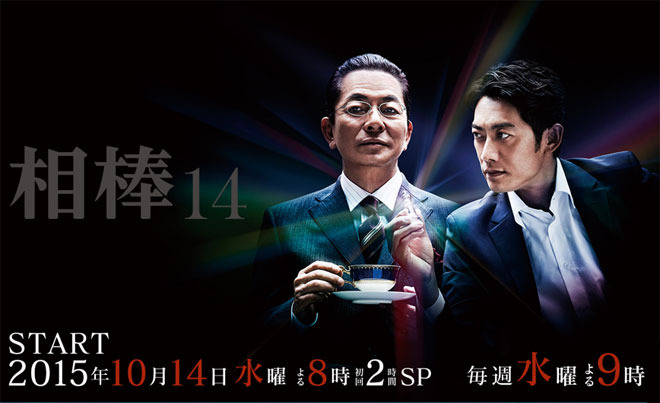 Story
A murder occurs inside a prison under the jurisdiction of the Ministry of Justice. It is an unprecedented case in which an inmate Mikura killed a prison officer Tashiro. Mikura will not talk at all during the interrogation and Vice Minister of Justice Kusakabe Yahiko instructs his former subordinate, Kaburagi Wataru, to join the investigation. A career bureaucrat seconded from the Ministry of Justice to the Tokyo Metropolitan Police Department under the pretext of a personnel exchange, Kaburagi has been given a room that was once the Special Missions Unit. None of the career bureaucrats seconded from other government ministries and agencies have ever received special treatment at the Tokyo Metropolitan Police Department. In the meantime, in an interrogation together with Itami Kenichi and other detectives from the First Investigative Division, Kaburagi hears a surprising story from Mikura. Three months ago, an inmate by the name of Umezu died. Although this was treated as death from illness, he was murdered by Tashiro. Mikura says in his statement that he advocates taking revenge and after Umezu’s death, he had heard from Umezu himself that Tashiro was the murderer. In other words, if Mikura’s words are taken for the truth, he had talked to Umezu’s ghost, but it sounds farfetched. Naturally, the people related to the investigation pay no attention. Only Kaburagi catches onto something about this statement. At that moment, Sugishita Ukyo who has been put on an indefinite suspension since his partner Kai Toru was arrested, is doing an investigation in some country … …

Characters
Mizutani Yutaka as Sugishita Ukyo
Inspector, Special Missions Unit. He went to Britain after he topped his class when he graduated from Tokyo University. After he returned to Japan, he joined the National Police Agency. He was then seconded to the Tokyo Metropolitan Police Department. As a detective with the Second Investigative Division of the Criminal Affairs Department which handles financial crimes, he demonstrated his competency at solving difficult cases. However, his meticulous investigations and sense of justice at tracking down the criminals of the cases that the top brass didn’t wish to be made public invited disaster. As a consequence, he was forced into a leisurely job at the loathed Special Missions Unit. Because the subordinates assigned so far have resigned quickly, the unit is mocked as the “graveyard of talented people”. Only Kameyama Kaoru, Kanbe Takeru and Kai Toru have served as his partner for a long period. In March 2015, Kai was found to have caused a series of assault cases. As Kai’s boss, he was also held responsible and put on an indefinite suspension which still has not been lifted.

Sorimachi Takashi as Kaburagi Wataru
A career bureaucrat from the Ministry of Justice who has been seconded to the Tokyo Metropolitan Police and attached to the administration department. An anomaly who wished to be seconded not to the National Police Agency but to the Tokyo Metropolitan Police under the pretext of a personnel exchange because of his interest in crime scenes. Although he has no investigation experience, he gets through even if he is a little reckless with the backing of Vice Minister of Justice Kusakabe Yahiko who favours him. From his appearance, he is not someone to be trifled with. Because he is treated like a guest at the Tokyo Metropolitan Police, he has no work in particular to do and spends each day with too much time on his hands.

Suzuki Anju as Tsukimoto Sachiko
The second generation female proprietress of ‘Hana no Sato’. She acknowledges that she was once an “out-of-luck woman” and experienced a lot of adversity. Amid this unfortunate life, she killed the yakuza who was her common-law husband with a gun out of vengeance (later known to be an abortive attempt). Sugishita Ukyo saw right through the crime through a chance encounter and arrested her as she tried to flee the country. After that, she served time in prison as an exemplary inmate. She was involved in some prison break scheme and escaped, but was once again jailed. Following her release, she started working at a cleaning company. Recognised for her work, she became a housekeeper for the company president of a restaurant chain. In addition, her cooking skills were acknowledged and she was also put in charge of product development. The company president fell in love with her at first sight and proposed. But she felt frightened by the sudden change in her fortunes and relinquished the good luck herself. In the end, she became the proprietress of ‘Hana no Sato’ at Sugishita’s recommendation.

Rokkaku Seiji as Yonezawa Mamoru
Sergeant, Forensic Science Division. He possesses outstanding ability. A follower of Sugishita Ukyo, the “famous detective”, he assists in investigations one way or other. However, he often gets unreasonable demands gently imposed on him. At times, he gripes that Sugishita is a slave driver. Even so, he supports the Special Missions Unit more than the arrogant Itami Kenichi of the First Investigative Division. In his personal life, he shares the same interest in rakugo as Sugishita and they are buddies who will exchange tickets as well as borrow and loan CDs.

Jinbo Satoshi as Okouchi Haruki
Chief Inspector and Senior Superintendent, Police Affairs Department. He investigates the dishonesty of police officers in the Tokyo Metropolitan Police. He appears to be a heartless guy because he brings colleagues to justice for their vices in an emotionless manner. At times, he keeps a watchful eye on the investigations of the Special Missions Unit which ignores the rules. However, he respects Sugishita Ukyo and informs him of the top brass’ decisions in advance, allowing him to avert crises, but he also pulls strings to contain Sugishita. He is known to constantly carry beer around with him, but it is actually his favourite soda since he was a child. In March 2015, he handed down an indefinite suspension to Sugishita.

Enoki Takaaki as Kusakabe Yahiko
Vice Minister of Justice. A career bureaucrat of the Ministry of Justice. Although he does not have the qualifications of a public prosecutor, he is hurriedly made the vice minister as a stopgap measure because of the sudden death of the previous vice minister. The position of attorney general is the top for those on the career track, but without those qualifications, his present position is as far as he can get. Because of this and conscious of dissent, he follows his own beliefs and does as he wishes. He favours his former subordinate Kaburagi Wataru.

Ishizaka Koji as Kai Mineaki
The National Police Agency’s deputy commissioner until his son Toru was arrested in an unexpected way in March 2015. A career bureaucrat who resumed duties at the agency in the summer of 2012 after serving in positions such as prefectural police chief. Whether he will be removed from his position as the second highest ranking officer in the agency and what will become of his rank is not known at this point.

This blog contains information and musings on current and upcoming Japanese dramas but is not intended to be comprehensive.
View all posts by jadefrost →
This entry was posted in Fall 2015 Dramas, TV Asahi and tagged Aibou Series, Mizutani Yutaka, Sorimachi Takashi, Suzuki Anju. Bookmark the permalink.