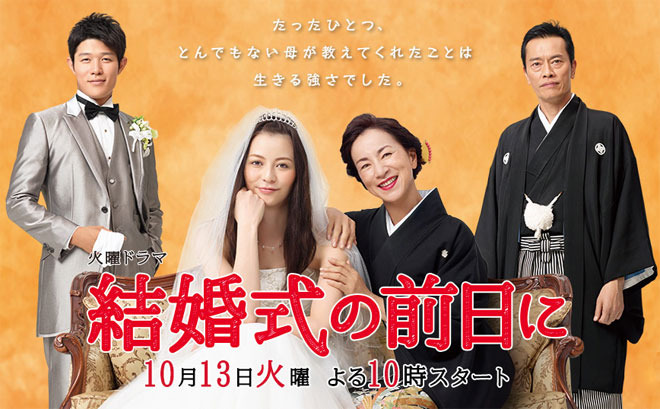 Story
31-year-old Serizawa Hitomi was single-handedly raised by her father, Kensuke, who runs a sushi shop at Tsukiji. She is a project leader at a mid-sized real estate company, and engaged to marry Sonoda Yuichi, a physician. With 100 days to go before her wedding, she is suddenly diagnosed with a brain tumour one day and learns that it could put her life in danger. Furthermore, her mother Kanako, who left home 28 years ago, shows up all of a sudden. A very free-spirited and unconventional woman, she bolted out of the house, and then Japan to pursue her own dreams. But she has come back after learning about Hitomi’s marriage. It is her dream to be greeted with a bow by her daughter on the eve of the wedding and she also has every intention to appear at the ceremony. Hitomi naturally cannot forgive Kanako for 28 years of neglect no matter how carefree a mother she has been. It is impossible for her to understand Kanako’s actions and now she is simply irritated by her posing as a mother and will never accept her selfish love. On the other hand, Kanako does not care about this. She will not let Hitomi die and starts to get actively involved in her life. This is the start of a 100-day battle between daughter and mother.

Episodes
#1: A Miraculous 100 Days between Mother and Daughter
#2: Break Off Engagement? I Won’t Lose to the Five-year Survival Rate
#3: Live Longer than Me! What a Father Can Do for His Daughter
#4: Don’t Give Up on Very Inept Mother’s Love Match!
#5: A Seemingly Broken Heart … I Don’t Want to Take Away His Dream!
#6: A Shocking Confession!! Parents’ Secret Hidden for 28 Years
#7: I’ve Found Something I’ll Never Part With in My Life!
#8: I’ve Finally Arrived … The Insanity that Creeps Up on Happiness
#9: The Last Holiday … We’ve Become a Real Family Though

This blog contains information and musings on current and upcoming Japanese dramas but is not intended to be comprehensive.
View all posts by jadefrost →
This entry was posted in Fall 2015 Dramas, TBS/MBS and tagged Endo Kenichi, Harada Mieko, Karina, Kekkonshiki no Zenjitsu ni, Suzuki Ryohei, Toda Naho. Bookmark the permalink.