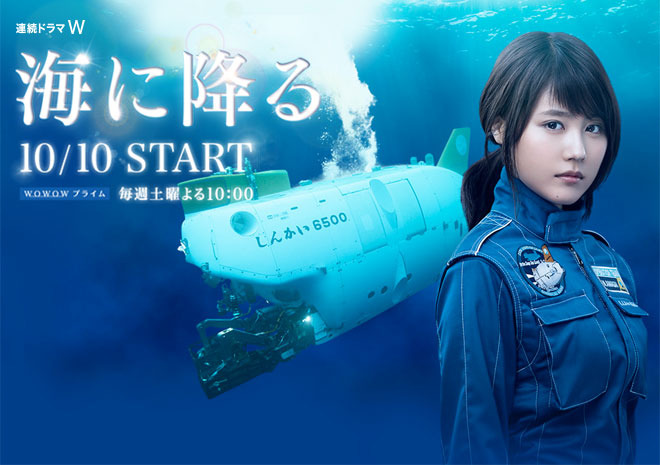 Story
Newcomer Amaya Miyuki belongs to the crew of the manned research submersible Shinkai 6500 (6K) at the Japan Agency for Marine-Earth Science and Technology (JAMSTEC), and dreams of becoming the pilot of the 6K. Her late father, Atsushi, had also been active as a brilliant pilot and researcher of JAMSTEC. He risked his own life to unravel the phenomenon called the “abyssopelagic universe”, but died of illness without fulfilling his life ambition. Miyuki is intent on exploring the deep sea that her father had told her about when she was a child, and devotes herself to her duties as a cadet pilot every day. Then one day, Miyuki gets the chance to board the 6K. JAMSTEC devotes itself to public relations activities on Japan’s first female pilot. But right before her voyage, Miyuki finds a tape from her father’s locker. It is a video that recorded enormous unknown objects and the fear of the pilots who were stranded in the deep sea. This also captured the last moments of her father. Seeing the shocking footage which bears no resemblance to the beautiful deep sea, Miyuki is assailed by an intense fear. Will she be able to come back safely from the dark deep sea?

Characters
Arimura Kasumi as Amaya Miyuki
A rookie who aims to be a 6K pilot which was the wish of her late father who had been an excellent pilot. She is self-assured even in an all-male workplace and has a personality that hates to lose. She is selected as a poster girl to be Japan’s first female pilot.

Inoue Yoshio as Takamine Koji
A geological researcher. An argumentative oddball called the “bigoted prince”. At first, he clashes with Amaya Miyuki, but they soon develop a collaborative relationship.

Itaya Yuka as Shoda Mamiko
The head of JAMSTEC’s Public Relations and Strategy Office. An elite PR woman. She recommends Amaya Miyuki for pilot as a poster girl to raise the visibility of JAMSTEC.

Tokito Saburo as Amaya Atsushi
Amaya Miyuki’s father. He pursued the deep sea’s mysterious phenomenon of the “abyssopelagic universe” and died of illness without fulfilling his life ambition. An unexplained video is found from his locker.

Harada Tomoyo as Amaya Naoko
Amaya Miyuki’s mother. She brought up Miyuki single-handedly while running a cafe after her husband passed away 10 years ago.

Endo Kenichi as Ishido Masashi
JAMSTEC’s new president. He is appointed the leader of JAMSTEC in oder to strengthen the Resources Development department. He and Amaya Miyuki’s late father were old friends.

Tsutsui Michitaka as Kamio Hiroshi
The captain of the voyage. A 6K pilot who prides himself on his sophisticated maneuvering techniques. He was a junior of Amaya Atsushi and a good senior to Amaya Miyuki.

Takahashi Kazuya as Kondo Tsuneya
The head of maintenance. He treats Amaya Miyuki somewhat coldly because he thinks the 6K is a workplace for men. He is more passionate about the 6K than others.

Nishioka Tokuma as Taki Takashi
The commander of JAMSTEC and person in charge of the 6K crew. He selects Amaya Miyuki to be the co-pilot, and is at times strict and at other times warm in his guidance.

Hiraizumi Sei as Minagawa Shohei
A director of JAMSTEC. He ceded his president’s seat to Ishido Masashi who came from the private sector at the request of the government. He has weak authority and his principle is peace at any price.

Takenaka Naoto as Jinnai Kimihiko
The head of the technology centre. He is headhunted by JAMSTEC from the conglomerate that Ishido Masashi belonged to when Ishido takes the position of JAMSTEC’s new president.

This blog contains information and musings on current and upcoming Japanese dramas but is not intended to be comprehensive.
View all posts by jadefrost →
This entry was posted in Fall 2015 Dramas, WOWOW and tagged Arimura Kasumi, Endo Kenichi, Itaya Yuka, Tokito Saburo, Tsutsui Michitaka, Umi ni Furu. Bookmark the permalink.