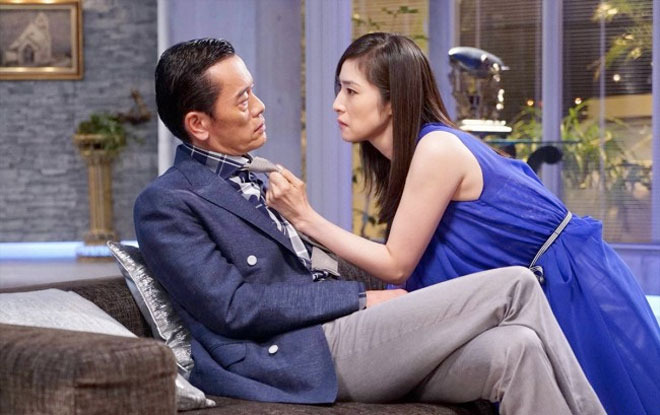 Date: From 9.00 p.m., 2 October 2015
Scriptwriter: Hamada Hideya (Last Hope, Zettai Reido Series, Perfect Report)
Original Work: Watashi to iu Na no Hensoukyoku by Renjo Mikihiko
Cast: Amami Yuki, Kimura Midoriko, Danta Yasunori, Tamayama Tetsuji, Ichikawa Ennosuke, Endo Kenichi, Namase Katsuhisa, Natsuki Mari, Ogawa Tamaki, Wakamura Mayumi
Synopsis: Miori Reiko (Amami Yuki) is a top model who has captivated the world with a beauty praised as the Pearl of the Orient. But at the same time, she is also a star that attracts media attention due to constant scandals resulting from her eccentric behaviour and record of uninhibited romances. One day, Reiko is discovered dead in her own room. The first person to make the discovery is her housekeeper Ohta Michiko (Kimura Midoriko). Potassium cyanide is detected in Reiko’s body and the police open an investigation. Sasahara Nobuo (Danta Yasunori), the head of a large hospital’s department of internal medicine, emerges as a suspect. Falling under the spell of Reiko’s beauty after they met, he deserted his wife and child, and even gave up his social status to get engaged to her. However, Reiko broke off their engagement in a mere three months. The media blew the fate of this foolish middle-aged man who was manipulated by Reiko all out of proportion. And yet, Sasahara could not get Reiko out of his mind. He visited her house again and again even after the engagement was called off, but was snubbed and he was witnessed shouting “I’ll kill you!” by Michiko. Sasahara’s fingerprints are detected from the glass that dropped in the bedroom where Reiko’s dead body was found. Test results also show that a cigarette butt left in the ashtray is Sasahara’s. Furthermore, it is even established that Sasahara took potassium cyanide out from the hospital. With the motive, physical evidence and testimony matching, the police arrests Sasahara. It is believed that the case will be solved if Sasahara confesses, but he firmly denies the charge. Meanwhile, shocking information comes in about the suicide of Sawamori Eijiro (Endo Kenichi), the president of the very successful apparel company Nature Textile, which uses Reiko as a brand ambassador. He had left behind a note that reads “I was threatened by Reiko. I killed her.” When the police proceed with the investigation, witness statements corroborate that he visited Reiko’s house on the night of her death. Then, an anonymous letter is delivered to the police. It says that Reiko had threatened several people including Sasahara. Everyone has a motive to kill her. Who murdered Reiko!? Assistant Inspector Okabe Keizo (Tamayama Tetsuji) of the Tokyo Metropolitan Police Department’s First Investigative Division realises that complicated interpersonal relationships are hidden behind this case. He investigates on his own, and gradually starts to get fascinated by Reiko’s darkness … …
Official Website: –

This blog contains information and musings on current and upcoming Japanese dramas but is not intended to be comprehensive.
View all posts by jadefrost →
This entry was posted in Fall 2015 Drama Specials, Fuji TV and tagged Amami Yuki, Endo Kenichi, Namase Katsuhisa, Natsuki Mari, Ogawa Tamaki, Tamayama Tetsuji, Wakamura Mayumi, Watashi to iu Na no Hensoukyoku. Bookmark the permalink.