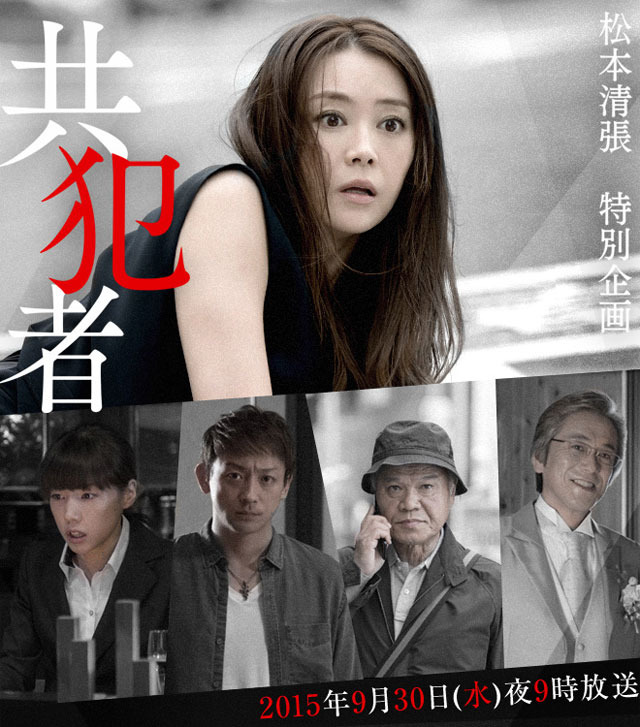 Date: From 9.00 p.m., 30 September 2015
Scriptwriter: Asano Taeko (Dakara Kouya, Utsukushiki Wana, Ten no Hakobune)
Cast: Mizuki Arisa, Naka Riisa, Yamamoto Koji, YOU, Daichi Yasuo, Terajima Susumu
Original Work: Kyouhansha by Matsumoto Seichou
Synopsis: Plastic surgery, murder, intimidation … … Uchibori Miwa (Mizuki Arisa), the president of cosmetic company Nympha Miwa, frequently gets media coverage due partly to her good looks. However, she finds a posting online claiming to know the real Uchibori Miwa and feels shaken. Miwa looks like a successful person but has a hidden past. She had once worked as a cleaner of the cosmetic surgery department and always wore a mask because she felt insecure about her own face. Her true face happens to be seen by the doctor Akizuki Yoshihiko (Terajima Susumu), but when he wants to try a new surgical procedure, she undergoes cosmetic surgery for free. The surgery is a success and Miwa, who has obtained a beautiful face like a new person, soon gets married to Akizuki. However, happiness is short-lived. Akizuki had been kind so far, but his attitude suddenly changes. Miwa is forced to live without freedom. Meanwhile, Machida Takeharu (Yamamoto Koji), who goes in and out of the Akizuki household as a landscape gardener, encounters Miwa standing around alone in the garden. Having seen with his own eyes how Miwa is subjected to cruel treatment such as Akizuki’s violence, Machida instinctively invites her to his house. The two of them become romantically involved … … One day, Miwa angers Akizuki because of something trivial and is severely assaulted. Then Machida arrives. She instructs him to kill her husband and the 50 million yen in the safe will be his. But Akizuki is standing behind them with a gold club. A scuffle breaks out, and the two of them end up murdering Akizuki. Miwa gives Machida money in order to cover up the murder, and tells him not to meet her ever again. Eight years go by. Miwa looks at the posting on the internet as she recalls Machida who probably hates her and her face goes stiff. At that same moment, Machida is staring at a poster of Miwa’s lecture in a town of Fukuoka Prefecture. Then Miwa meets Takeoka Yoshiko (Naka Riisa), a former investigator who says she is her fan. Hearing Yoshiko’s story about losing her job after the company went bankrupt, Miwa invites her to work in her own company. But in an unexpected turn of events, Miwa subsequently asks Yoshiko to do a background check on Machida … …
Official Website: www.tv-tokyo.co.jp/seicho_kyouhansya

This blog contains information and musings on current and upcoming Japanese dramas but is not intended to be comprehensive.
View all posts by jadefrost →
This entry was posted in Fall 2015 Drama Specials, TV Tokyo and tagged Matsumoto Seichou, Mizuki Arisa, Naka Riisa, Terajima Susumu, Yamamoto Koji, YOU. Bookmark the permalink.