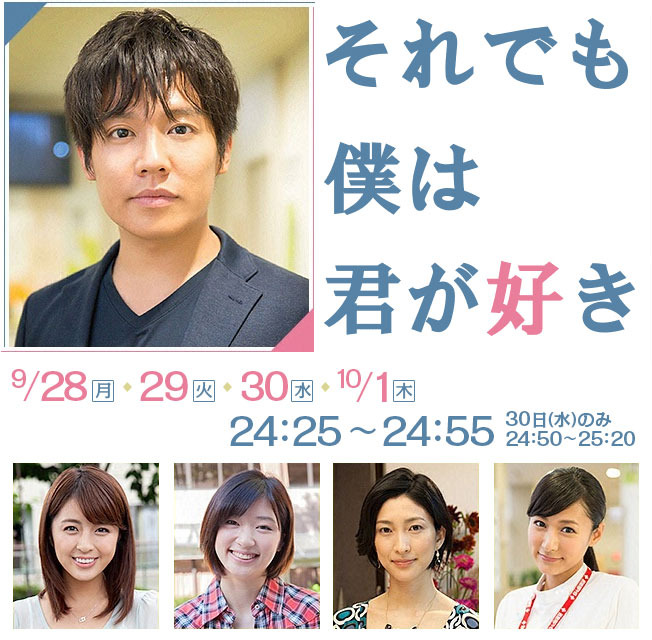 Episode 1
Serizawa Yusuke is present for his aunt’s childbirth. He heads to the church to pray for a safe delivery, but encounters an unusual sister there and is told, “If you do not confess your past sins and repent, your prayers will not come true.” Yusuke starts to confess the women whom he was in love with and hurt in the past. His first love was his elementary school teacher 20 years ago. Just like Hermes in Densha Otoko, she was a lovely, pure and kind teacher. Yusuke, who lived in comfort, was excited about his first love. However, the infidelity of Yusuke’s father triggered the start of his beloved mother’s breakdown little by little … …

Episode 2
After getting separated from his mother, Yusuke was placed in the custody of his grandmother and aunt. Time goes by. Now 20, Yusuke, had grown up to be the typical “uncool male virgin”. After failing the entrance exams and retaking them a year later, he started law school. He met a girl there who was ghastly pale and poor like Hana Yori Dango’s Makino Tsukushi. The first girl he dated in his life was putting herself through school and doing nothing but part-time jobs because of her father’s debts. Wanting to be helpful, Yusuke made every effort but … …

Episode 3
Even as a third year university student, Yusuke still had no girlfriend. Naturally, he remained a virgin. If he passed the bar exam, a life of popularity awaited him, and he eagerly worked part-time at a law firm for the sake of his studies. However, the law firm handled nothing but consultation for divorce trials. Yusuke got fed up with the relationships between men and women. At that time, he met a female because of a wrong phone call. Like Kim Sam Soon in the popular South Korean drama ‘My Name is Kim Sam Soon’, she was older than him and a career woman at a foreign company. In fact, she was distressed about adulterous love.

Episode 4
Yusuke has finally become a lawyer. But even now at the age of 29, romance is as usual. Relationships do not last even when he is involved with a woman. At that moment, he receives news of his mother’s death. His mother was forced to stay at the hospital because of the sad events that happened 20 years ago. She was separated from her son ever since and left feeling lonely. The family gets together because of his mother’s death, but … …

This blog contains information and musings on current and upcoming Japanese dramas but is not intended to be comprehensive.
View all posts by jadefrost →
This entry was posted in Fuji TV, Summer 2015 Drama Specials and tagged Koide Keisuke, Soredemo Boku wa Kimi ga Suki. Bookmark the permalink.