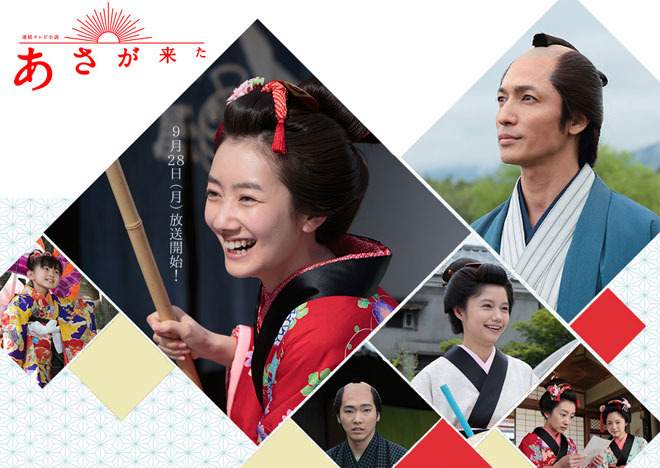 Story
Imai Asa was born the second daughter of a wealthy Kyoto merchant in 1894, in the last years of the Tokugawa Shogunate. A tomboy with a love of sumo, she is a marked contrast to her elder sister, Hatsu who applies herself diligently to accomplishments such as the koto and needlework. Asa and Hatsu have been promised in marriage since birth. Asa’s fiance is Shiraoka Shinjiro, the second son of a large Osaka moneychanger while Hatsu’s is Mayuyama Sobei, the son of a well established moneychanger. However, when Asa is old enough to understand things, she vehemently protests against marriage. Asa unexpectedly finds herself attracted to her fiancee Shinjiro and becomes conscious of love. They get married. But the operations of the money exchange business have become outdated in the Meiji era and fall into dire straits. Her husband is not the type to make money and only amuses himself with artistic pursuits such as the shamisen. When the business is finally about to go under, Shinjiro brings the conversation around to coal mining which appears to be the future. These words ignite Asa’s spirit and she heads for Kyushu alone. What awaits her are male coal miners who only drink alcohol and do not work. On the other hand, Hatsu marries into the family with the most historic money exchange business in Osaka, However, they end up bankrupt. Hatsu vanishes just like she has skipped town. Asa finally finds her and offers financial assistance. However, her sister and husband refuse this offer and make a fresh start on their own. Asa struggles as a business woman. It is not easy for her to be recognised in a male-dominated world and hardship continues. In the middle of this, her friendship with Godai Tomoatsu, who is committed to Osaka’s development, deepens. She takes on the running of a bank and champions the aspirations of many people. She also cultivates the first female bank employees in Japan. Even Shinjiro, who had devoted himself to “supporting” her, is motivated to take action after watching and getting a sense of the significance of work. With the passage of time, the final task which Asa and Shinjiro take on is the establishment Japan’s first girls college in consideration of the connection between education for girls and the progress of society.

Characters
Haru as Imai Asa
The second daughter of a wealthy Kyoto merchant. A tomboy with a strong sense of justice, love of sumo and great deal of curiosity. She has been married to the son of a leading Osaka money exchanger since birth, but she because she loves her older sister Hatsu and is also interested in the pursuit of knowledge, she refuses the marriage at least once. However, she comes into contact with her fiance’s kindness and tolerance decides to marry into the family. When the Meiji Restoration comes immediately after marriage, the family business ends up declining amidst the upheaval. Taking the place of her husband with refined tastes, Asa starts to work for the shop. Then she starts businesses in coal mining, banking and life insurance in while raising their children. Furthermore, she devotes herself to founding Japan’s first girls college for the future of females. She continues to discover her husband’s charms even after marriage, and her love for him deepens throughout life.

Miyazaki Aoi as Imai Hatsu
Imai Asa’s older sister and someone whom she can confide anything in. Unlike the uninhibited Asa, she is reserved and has a dignified beauty. She is good with the koto and needlework. She marries into the family which runs Sanoujiya, an Osaka money exchange business of long standing, but is not able to adapt herself to them. Amid her hardships, a period of turbulence follows the transition from the end of the Tokugawa Shogunate to the Meiji period. She supports the family, which is on the verge of a crisis, and her husband, and begins to find happiness in the new era.

Tamaki Hiroshi as Shiraoka Shinjiro
Imai Asa’s fiance. The second son of the owner of the money exchange business, Kanoya. He has a bright, cheerful personality. A man of pleasure who is absorbed in the shamisen and tea ceremony. An incident that happened in his childhood caused him to distance himself from the family business. He falls in love with Asa’s drive and passion, and they become husband and wife. After marriage, he discovers her talent as a businesswoman and supports her lifelong struggle.

Masu Takeshi as Imai Tadaoki
Imai Asa’s father. A wealthy Kyoto merchant who runs dry goods and money exchanger businesses. The head of the Imai family. An excellent businessman with a keen mind. He tries to skillfully predict the times in order to weather the chaos from the end of the Tokugawa Shogunate’s reign to the Meiji period. As a father, he is strict in the upbringing of Asa and Hatsu as his daughters and son Kyutaro as the heir of the Imai family. He is particularly stern with the free spirited Asa.

Terajima Shinobu as Imai Rie
Imai Asa’s mother. A good wife and wise mother, she constantly supports her husband Tadaoki from behind the scenes and is gentle with their daughters. She worries about Asa and Hatsu even after they have married into families, and visits her in-laws. She has lived with the notion females follow their parents and older brothers in youth, husbands after marriage and children in old age. But her opinion begins to change as Asa grows into an adult.

Hayashi Yoichi as Imai Tadamasa
Imai Asa’s grandfather. The former head of the Imai family. He has gone into retirement, but frequently visits the household. He favours his granddaughter Asa. He recognises her individuality and encourages her to live freely.

Kondo Masaomi as Shiroka Shokichi
Shiraoka Shinjiro’s father. The owner of the money exchange business, Kanoya. Trust is his priority as an Osaka businessman. Although he is running a family business, he is not bound by traditional customs. He is the first to recognise Asa’s enthusiasm and talent in business, and shows an understanding. He teaches her the basics of business and watches over her growth strictly.

Fubuki Jun as Shiroka Yono
Shiraoka Shinjiro’s mother. She believes females should not interfere in business and have only to take care of the house. She fancies herself a dependable person, but is often careless. She rebukes Asa for her daring behaviour.

Kiuchi Yoshikazu as Shiroka Shotaro
Shiraoka Shinjiro’s elder brother. He is capable and has even won the confidence of their father, Shokichi. He is supposed to be the next owner of Kanoya, but … …

Emoto Tasuku as Mayuyama Sobei
The eldest son of the owner of Sanoujiya, an Osaka money exchange business. The fiance of Imai Asa’s elder sister, Hatsu. Because he is brusque, it is not certain what he has in mind. He has mixed feelings for his naggy mother, Kiku. He starts a new life with his wife, Hatsu, during the tumultuous period following the Meiji Restoration.

Nono Sumika as Miwa
Shiraoka Shinjiro’s shamisen teacher. A woman with sexual appeal. Her relationship with Shinjiro is … …

Dean Fujioka as Godai Tomoatsu
A samurai of the Satsuma domain. He has knowledge of the state of affairs of the West and has a global mindset. He meets Imai Asa while busy with Osaka’s development, and becomes a mentor to her. He encourages Asa in her hard struggles as a businesswoman. He is later called the father of the modern Osaka economy.

This blog contains information and musings on current and upcoming Japanese dramas but is not intended to be comprehensive.
View all posts by jadefrost →
This entry was posted in Fall 2015 Dramas, NHK and tagged Asa ga Kita, Dean Fujioka, Emoto Tasuku, Fubuki Jun, Miyazaki Aoi, Tamaki Hiroshi, Terajima Shinobu. Bookmark the permalink.