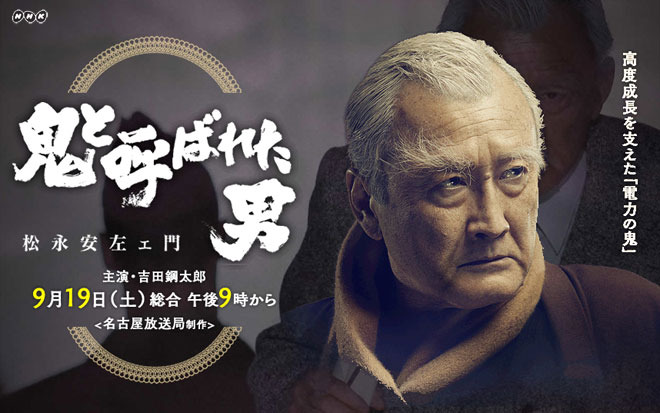 Story
Before the war, Matsunaga Yasuzaemon, a man who was called “Electricity King”, led the private electricity company, Toho Electric (the predecessor of Chubu Electric). He resigned from all the offices he held because electricity was controlled by the state in the Pacific War, and entered a life of seclusion deep in the mountains of Saitama Prefecture. Everyone thought, “This is the end of Matsunaga Yasuzaemon”. However, when the war ended, the 74-year-old man selflessly made the decision to do battle once more for the sake of rebuilding the ruined country and the happiness of the people. As a follower of Fukuzawa Yukichi, he inherited the spirit of independence, self-respect and the people. It would be the fight of an unconventional, stubborn old man over 70 with an indomitable will. In November 1949 (Showa 24), Yasuzaemon became the chairman of the Committee for Reorganisation of the Electric Utility Industry by the order of Prime Minister Yoshida Shigeru. Although the breakup and privatisation of electricity utilities was considered necessary to ensure a stable supply of power, all the other members advocated preserving the state-controlled Nippon Electric Generation and Transmission, and completely opposed Yasuzaemon. However, Yasuzaemon was undaunted. He continued discussions and even started directly convincing the General Headquarters. One day, Yasuzaemon barged in on Ikeda Hayato, the Minister for Finance and Minister for Trade and Industry at that time, and explained with passion, “At present, I’m not thinking of doing business and making money. Let the country gain! I want all the people to live a good life!” His thinking greatly resonated with Ikeda. Then in October 1950 (Showa 25), General McArthur handed down a decision on restructuring the electric utility industry to Prime Minister Yoshida … … The post-war recovery and high economic growth would serve as the basis for him to achieve the breakup and privatisation of the electricity business. Minister Ikeda admired Matsunaga like a father while Prime Ministers Yoshida Shigeru and Konoe Fumimaro, Shirasu Jiro and others were in awe of his unfathomable passion.

Characters
Yoshida Kotaro as Matsunaga Yasuzaemon
Before the war, he was the “electricity king” who led a private electrcity company. After the war, he tackled the reorganisation of the electric utility industry which had come under state control with the “tenacity of the devil”, with his sights on Japan’s future in order to ensure a reliable supply of power. He took the position of the chairman of the Committee for Reorganisation of the Electric Utility Industry, but faced fierce opposition from committee members.

Ito Ran as Matsunaga Ichiko
Matsunaga Yasuzaemon’s wife. She stood by her foolhardy husband, managed him appropriately and supported him with great love.

Kunimura Jun as Miki Takashi
The president of Nippon Steel and leading figure of the Committee for Reorganisation of the Electric Utility Industry who strongly opposed Matsunaga Yasuzaemon.

Kushida Kazuyoshi as Sato Tomekichi
The director of Oze Gauging Station. He formed a deep friendship with Matsunaga Yasuzaemon.

Ito Shiro as Yoshida Shigeru
The 49th Prime Minister of Japan. He was the one who decided make Matsunaga Yasuzaemon the chairman of the Committee for Reorganisation of the Electric Utility Industry.

Takashima Masanobu as Ikeda Hayato
The second Minister for Trade and Industry. He supported Matsunaga Yasuzaemon’s proposal to reorganise the electric utilities industry.

Takarada Akira as Ikeda Shigeaki
A former leader of Mitsui financial group. The Minister of Finance and Minister of Commerce and Industry in Konoe Fumimaro’s first cabinet. He put Matsunaga Yasuzaemon forward as the chairman of the Committee for Reorganisation of the Electric Utility Industry.

This blog contains information and musings on current and upcoming Japanese dramas but is not intended to be comprehensive.
View all posts by jadefrost →
This entry was posted in NHK, Summer 2015 Dramas and tagged Ito Shiro, Iwamatsu Ryo, Keisei Saimin no Otoko, Kunimura Jun, Takashima Masanobu, Yoshida Kotaro. Bookmark the permalink.