Posted on September 5, 2015 by jadefrost 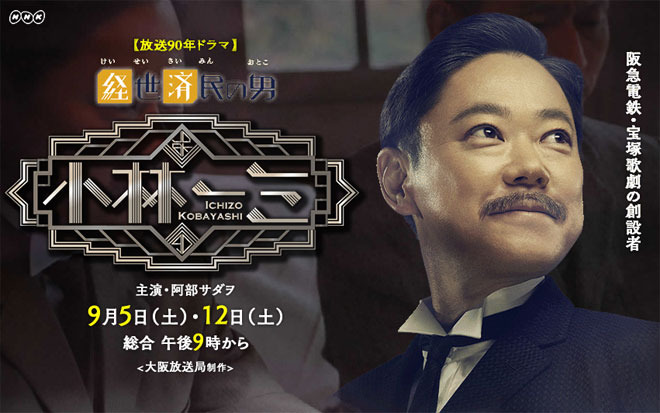 Story
Born to a wealthy Koshu family, Kobayashi Ichizo, was a school dropout who aspired to be a novelist. In 1894 (Meiji 27), Ichizo had been working leisurely at Mitsui Bank’s Osaka branch while writing novels, which was his hobby. However, his life drastically changed after Iwashita Kiyochika arrived as the new branch manager. Iwashita would be his teacher in business and in life. The daring Iwashita made financing decisions at his own discretion. Ichizo was twisted around by him and up to his neck in work every day, but at the same time he saw that working for a bank was interesting. However, at that juncture, Iwashita, who stood out for acting arbitrarily on without consultation, was forced to resign, and Ichizo was also transferred. After that, Iwashita established Kitahama Bank and Ichizo was invited to be the new company’s president. He resigned from Mitsui Bank and quickly returned to Osaka. But the next day, the stock market crashed. Ichizo was put in charge of liquidating the business of Mino Arima Electric Railway, an excursion train that Kitahama Bank had been involved in, by Iwashita. He felt sorry for the railway which was a victim of the recession. Hitting upon a revolutionary idea because of a remark by his wife, Kou, Ichizo got into action to rehabilitate the small railway, the forerunner of Hankyu Electric Railway. However, it does not attract passengers. He hits upon the idea of all-female opera performances, and establishes the Takarazuka Revue in order to create a place that would draw families. At that moment, Iwashita who was a large shareholder of Mino Arima Electric Railway, got involved in a bribery case and was ousted. Kitahama Bank was practically pushed toward bankruptcy. Ichizo borrowed money and bought out the bank’s stake in the railway, making it his own company in both name and reality. He would eventually grow it into a large corporation known as Hankyu and subsequently develop Hanshin Department Store next to the station by expanding the business with innovative ideas and business models that are still applicable today. He was a man who cherished dreams to the end.

Characters
Abe Sadao as Kobayashi Ichizo
He was working for Mitsui Bank and could not give up his dream of being a novelist when he met the unconventional banker, Iwashita Kiyochika, and became conscious of the appeal of enterprise. He combined the development of a small railway called Mino Arima Electric Railway and a residential district along the railway line, which was a creative way of development. Even after that, he grew the business into a big company with all sorts of ideas.

Okuda Eiji as Iwashita Kiyochika
Kobayashi Ichizo’s boss during the time he was a bank employee. He made daring investments in businesses with potential and that drove the modernisation of Japan. He awakened Ichizo to the appeal of business. After that, he started his own business when Ichizo resigned from Mitsui Bank. But he got involved in a bribery scandal and lost his standing. He also greatly changed Ichizo’s destiny.

Takimoto Miori as Niwa/Kobayashi Kou
Kobayashi Ichizo fell in love with her at first sight when she was an apprentice geisha and they became a couple. While growing up, she was told by a that the person she marries will succeed in life. She believed in these words and wished to marry Ichizo. She was the woman who taught Ichizo, who had lost his parents when he was young, what family and life is.

Yajima Kenichi as Hiraga Satoshi
Kobayashi Ichizo’s boss. The branch manager of Mitsui Bank’s Nagoya and Osaka branches. He was quicker than Ichizo in striking out on his own and starting a business, but he helped Ichizo who was at the mercy of the Great Depression, in various ways. He was the person who was beside Ichizo and supported him as he stood on his own feet as a businessman.

Inoue Yoshio as Kobayashi Fusao
Kobayashi Ichizo’s eldest son. He grew up watching his father work furiously, and how his father tried to balance his dream and commerce in the new era.

Maro Akaji as Fujita Denzaburo
The leader of a Kansai conglomerate and founder of the Fujita-gumi. He reaped enormous wealth at a young age from dealing in military supplies. He also supported Iwashita Kiyochika’s Kitahama Bank.

This blog contains information and musings on current and upcoming Japanese dramas but is not intended to be comprehensive.
View all posts by jadefrost →
This entry was posted in NHK, Summer 2015 Dramas and tagged Abe Sadao, Keisei Saimin no Otoko, Okuda Eiji. Bookmark the permalink.